The ASUS P5K3 is the first DDR3 board we have used, therefore we will not have any comparisons to other P35 boards in this article. You can expect near-future comparisons, however. Here are the memory speeds used on each platform:

It’s important to note that the DDR3 is running faster, although with lower timings. Both settings listed above is what we consider standard for each platform. Not many will purchase DDR3 memory to run at DDR3-800. DDR3-1066 at 6-6-6 proved to be our sweet spot given the voltage. We didn’t want to lower into the 7-7-7 territory, and we believe most good DDR3 kits will handle those speeds/timing set well.

Taking a look at the overall graph, we can see that the P5K3 performed exceptionally, though the eVGA came quite close to matching its score. The XBX2 fell quite a bit behind. 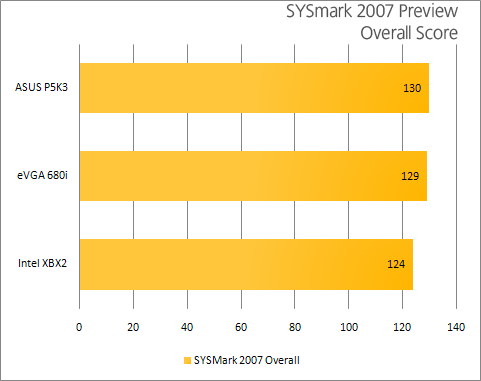 The individual test results can give us a deeper look at where each board failed, or performed well. Regarding 3D tests, all of the motherboards performed quite well to one another. When performing personal renders with 3DS Max, I found that this was always the case. Throughout the three different boards, not one had an advantage. 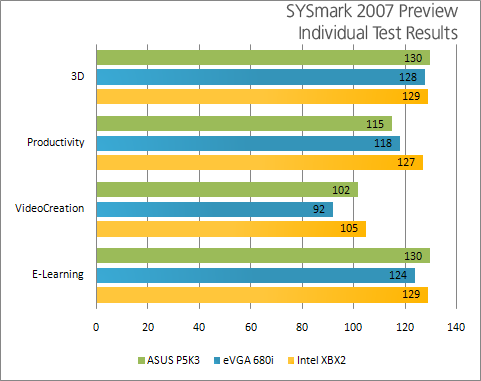 Although the XBX2 had a lower overall score, it blew past the other two boards in the productivity set. In fact, it performed better than both of the other boards in the VideoCreation test as well, and matched up well with the P5K3 in the E-Learning. Why its overall score showed the opposite, I have no idea. The P5K3 performed well throughout all tests though, although even with its faster memory, it did not walk away a clear winner.