Last week we had taken a look at the latest high-end board from ASUS, the P5K3, and were left quite impressed. It’s not an inexpensive board, but the feature-set well made up for the extra few dollars they are asking you to spend. While the P5K3 is a DDR3 board, the P5K is a near spitting-image, minus that DDR3 support. Thanks to that fact, we don’t expect much difference in our testing results, except where memory bandwidth plays a large role.

For the uninitiated, the P5K is based on Intel’s latest P35 chipset, which we explained last month. What it offers over the previous P965 chipset is a wee bit more flexibility for motherboard manufacturers, since they now can offer upwards of 12 USB 2.0 ports, 1x eSATA port and my personal favorite, the S-ATA port disable. That allows you to disable any installed hard drive, so that you can deem it invisible.

Board-specific features include the usual array of ASUS-provided software, built-in WiFi, unique BIOS features and full Windows Vista support. One touted feature is the fact that memory speed can be increased up to 75% on the P5K. From looking closer, it appears this is justified by the fact that you can run DDR2-1066 speeds natively, while most other boards run DDR2-800. This is not a big deal. If your memory can run at DDR2-1066 speeds, it doesn’t need a special feature to have it work.

The P5K is part of ASUS’ Ai Lifestyle series, meaning it offers features not only for enthusiasts, but regular consumers who want a feature packed board, such as one with a good on-board audio chipset. Ai software is also included, which allows you to perform a variety of tasks within Windows, which we will touch on later in the review. Before we move forward, let’s take a look at the board itself.

The P5K box is strikingly similar to the P5K3, not surprisingly. The front lifts up so that you can read a slew of info before ultimately taking the board out of the box. 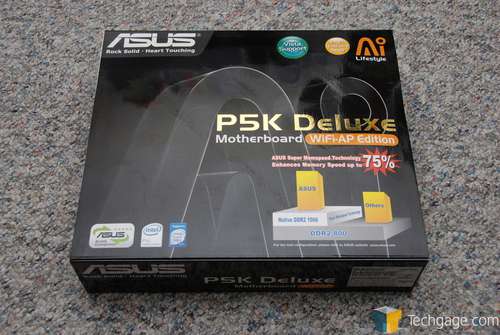 ASUS does not skimp on included accessories and that’s a benefit that comes with their higher-end boards. You will find four S-ATA cables, one IDE and one floppy, the WiFi adapter, Q-Connector (used for managing the ATX cables better), I/O guard, expansion for 1x FireWire and 2x USB, manuals for both the board itself and the WiFi functionality and finally, the software. 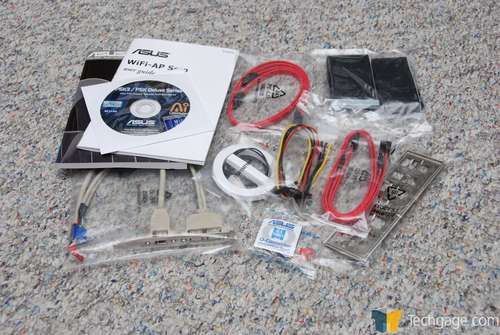 One thing I failed to point out in last weeks review of the P5K3 is that the WiFi adapter is quite unique. It’s a simple white ring that can ‘clip’ to the top of your case, because the bottom is magnetized. Simple, but useful.