As I touched on in the intro, one of the biggest new features on the P5Q is “Drive Xpert”. Essentially, Drive Xpert is a RAID setup, but is designed to be easy to setup and maintain. If you are already familiar with setting up a RAID, then this will be nothing but a dumbed-down version.

The great thing about Drive Xpert is that it can be set up either in Windows or inside of the Splashtop Linux environment on the motherboard itself. The latter would be ideal if you plan to run your OS off of the RAID. If you plan to have a primary drive and use RAID just for your data, you may prefer to set up in Windows.

There are three types of setups here. “Normal” would set up the S-ATA drives without RAID, so they’d act as normal ports. “EZ Backup” is essentially RAID 1, while “Super Speed” is RAID 0.

I didn’t have enough hard drives to test out Super Speed (since I needed to retain the data on the drives I did have), but with one blank drive I was able to test out the EZ Backup feature. I chose to do this in Windows so grabbing screenshots would be easier, but the setup in Splashtop is quite similar. Before you do anything, though, you’ll need to go into the BIOS and choose which mode you want to use, so that it can activate the ports accordingly on boot. 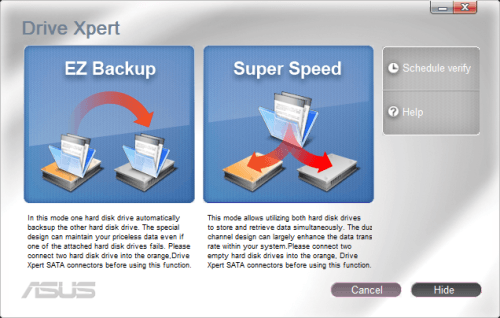 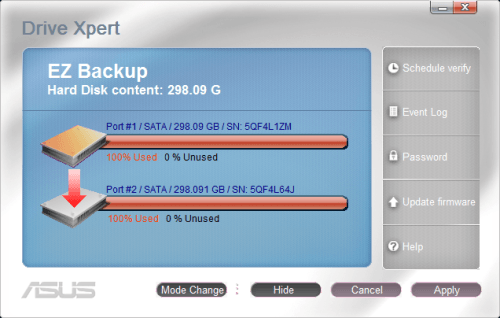 To test, I put in one of our benchmarking drives to be duplicated to another blank drive that I had lying around, which happened to be the exact same make and model. After setting up the “EZ Backup” in Windows, a small systray icon will notify you that the RAID is rebuilding. Once it stays a solid color, it means that both drives are then identical and will be kept identical. 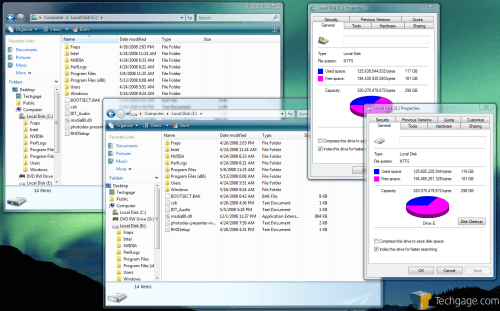 Once this was finished, I switched off the RAID and set the drive up as a regular drive, and as you can see in the screenshot, both drives are kept pretty much identical. The difference in overall usage likely has to do with the fact that the C: was my main drive, so it was being written to during boot. E: also didn’t have a proper boot record written, which might affect the space as well.

The installation and setup overall was quite simple though, and I’m not a man who enjoys messing around with RAIDs. If I was using a motherboard that had this feature though, I’d happily take advantage of it.

As mentioned earlier, the Splashtop Linux environment has been updated for the P5Q-series, although other boards that follow suit will also include it. For a far more in-depth look, please refer to my article from a few weeks ago, which tackles all aspects of the environment.

For those unfamiliar, Splashtop is a built-in version of Linux that’s accessible within 10 seconds after boot. This is to save people from waiting for a Windows/Linux boot, in order to accomplish something simple, fast. 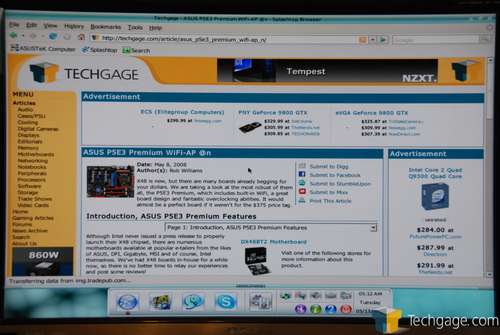 Once in, you can surf the web, chat on Pidgin (MSN, AIM, Google Chat), talk and chat on Skype, and look at photos. New on the P5Q is the ability to update the embedded environment, but I’m currently unsure of how updates will be had. I am assuming that ASUS will host the latest versions on their site, but DeviceVM may very-well host them as well, depending on how different each version needs to be from board to board.

The overall usefulness of Splashtop is debated, but it’s a nice feature to have for those times you just need to boot up quick to find out a bit of information. It uses a little less power and is much faster. Thanks to ASUS’ sudden dedication to the tool, we should only see its feature set and usefulness improve.