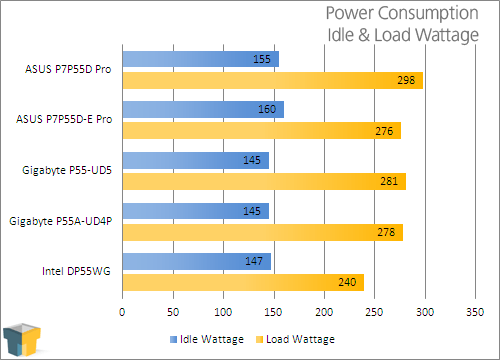 It appears as though the added functionality of S-ATA and USB 3.0, and also the PLX chip, adds a bit to the overall power consumption of the board, as the P7P55D-E PRO draws 5W more at idle. Interestingly, though, it draws far less power at load, so I’d consider this to be a win overall.

As you would expect from a $190 offering, the P7P55D-E PRO lacks nothing, either from a features or performance standpoint. I found it a bit odd that the board scored a bit lower in our SYSmark VideoCreation test, but that wasn’t reflected throughout the rest of the review, so it’s hard to knock it for that. In some cases, it even performed better than the other boards, while most often it came out on par, as we’d expect.

This board is special for a few different reasons. The first is that it supports both S-ATA 3.0 and USB 3.0, and with the PLX chip, it means that your primary graphics card will still run at PCI-E 16x. I’m still unsure how important this is in the grand scheme, and I’m not sure which GPUs would perform worse at 8x (I haven’t been able to test up to this point, due to a lack of 3.0 devices), but, this is one thing ASUS has over Gigabyte, and it looks good on them. 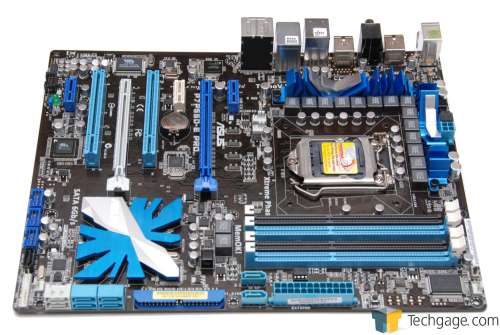 A couple of weeks ago, I would have said that Gigabyte is the only one to offer P55 boards with the 3.0 technologies at a decent price-point, but ASUS has released new models since then and changed that, this board included. At $190, it’s one of the company’s first sub-$200 boards that support those features, and I’m glad to see it, because I wasn’t sure how long it was going to take.

For those on a tighter budget, but still want ASUS quality and those supported features, another option is the non-PRO version of this board, which retails for around $160. There’s no way that a $160 board could be considered “budget”, but it’s as good as it gets from ASUS right now. There might be one downside on that model, though, as I can’t spot the PLX chip there, so that board might not include one. I’m checking with ASUS to see if that’s the case, and will update below once I hear back.

As it stands, this is a fantastic motherboard for the price. Performance-wise, it’s great, and from a design standpoint, it’s ideal. With a fully-built machine, no component should ever be blocking another, and you can tell that real thought went into the layout (you can really tell when the opposite is true). What I like most about this board is that it’s a sub-$200 offering that can deliver true S-ATA and USB 3.0 support. With it, enthusiasts don’t have to go all out and be stuck with taking the X58 route. If you can swing it, this is a great solution for those with 3.0 products in the game plan.

ASUS has sent me a couple of clarifications as to some points I made. The first is that PhysX support doesn’t always mean a third PCI-E slot, but rather support for a dedicated PhysX card in general. Because of the board’s design, ASUS allows for two dual-slot cards to be used, while still leaving 1 PCI and 2 x PCI-E 1x. Also, regarding the lack of an LED BIOS readout, ASUS believes its Q-LED solution is better for most users, as it will help them quickly diagnose which component is failing with LEDs laced around the board.

Regarding the TurboV EVO, even though this isn’t to be found on the DVD, it can still be downloaded from the support website and used as usual. Also, regarding the “ASUS Utility” I pointed out on our BIOS page, ASUS had this to say, “The option you see in the bios for ASUS/3rd Party UI Priority is to offer users the most flexibility and stability when working with application that requires bios level/GPIO access. If using Turbo V EVO you should have it set to ASUS if you using something like SETFSB, Memset, CPU Tweaker these should be set to 3rd Party.“.

One thing I failed to tackle was fan control, which is one improvement that the P7P55D-E PRO has over the original. This is a combination software/hardware solution, and gives the user great control over their fan configuration. Lastly, the non-PRO version of this board does not include a PLX solution, which is why ASUS is promoting this board more.