I hate to admit it, but despite the fact that AMD launched its ATI Radeon HD 5000 series in late September, which included the HD 5870 and HD 5850, we haven’t had a review of the latter card up to this point. Thanks to our friends at ASUS, we received their version of the reference card a couple of weeks ago, and had a blast putting it through its paces. It never ceases to impress me just how much value can be found in GPUs today, and the HD 5850 is no exception.

The benefits of course don’t end there, though. Launch HD 4000 cards had a major issue… heat. Even at idle, the GPU cores could sit at 80°C, and any way you look at it, that’s insane. Those problems are no more when looking at the HD 5000 series, because not only have the temperatures dropped significantly, but the power consumption as well (we’re talking 80W idle to 17W idle… that’s beyond impressive).

If the theme isn’t obvious enough, the ATI HD 5000 series of cards are impressive in almost all regards. They’re so good, that it’s beginning to become a little difficult holding out for NVIDIA’s Fermi, to see what its striking back with. If you’ll recall, AMD trampled on NVIDIA’s parade last summer, and if the green team is to be believed, we might see the opposite thing happen when Fermi gets here – and I can’t wait.

But for now, we have AMD’s line-up, and there’s little reason to complain. At the high-end, as mentioned, is the HD 5870, which carries an SRP of $379. Sadly, most e-tailers are pricing them more towards $400, but even at that price-point, the cards can be considered a relative bargain. The next step down is the HD 5850, one that has slower overall clock speeds and about 9% less stream processors. The differences aren’t stark, but the price is much lower, at $259 SRP.

Both of these cards might be the best out there right now, but both are plagued with availability issues. There seemed to be ample supply at first, but that went downhill fast. Today, you’re lucky to find either in stock, and the only way to actually get one is to keep checking back to various e-tailers every day. I’m hoping the situation changes soon, but it’s unfortunate that AMD didn’t better plan this out. The company wanted to beat NVIDIA, but if gamers can’t purchase the cards, it’s a problem.

As always, below is AMD’s current GPU line-up. Some cards aren’t so relevant today thanks to newer releases, such as some select cards from the 4000 series, but all are still available for purchase. AMD’s next addition will be its “HD 5970”, the X2 Hemlock card.

The EAH5850 ASUS sent us is based on ATI’s reference model, so there’s no fancier cooler, nor much of anything else. As I touched on in our review of Sapphire’s Vapor-X HD 5870, not many companies have opted to dedicate much time or money to ATI’s latest cards simply because of their availability. It makes no sense to do so when no one can buy them, and it may very well be another month or two before that situation changes.

Like most other launch HD 5000 cards, ASUS’ includes a voucher to download Dirt 2 (via Steam) when it comes out. If that’s a game you want to acquire to begin with, and you factor the price of what it would be in conjunction to what the GPU itself costs, the card ends up being an even greater value at the end of the day, despite the price-gouging by various e-tailers. Another sweet addition to ASUS’ cards is “Smart Doctor”, an overclocking tool that allows control over the voltage, allowing for even greater overclocks. I’ll touch on that a bit in our overclocking section.

As seen below, ASUS’ card here sticks to the reference design (see? I wasn’t lying), and not too much is wrong with that. It might appeal to some, it might not to others. What’s important is that the design works. This is the first generation of graphics cards where I don’t feel like I have to put down the design, because these cards don’t overheat like the older ones, so even as a reference design, it’s going to allow stable operation, and some overclocking headroom. 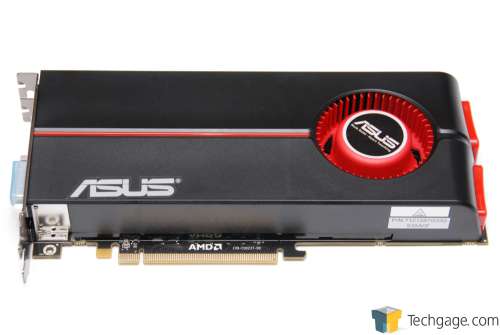 If you’ve seen any HD 5000 series cards before, the back plate of this one won’t be too surprising. There are two DVI-D ports, along with an HDMI and DisplayPort. Of course, if you’re still using a VGA monitor (I hope not by now), an adapter is included in the box. Of course, like the rest of AMD’s current line-up, this card supports CrossFireX with another HD 5000 series card. 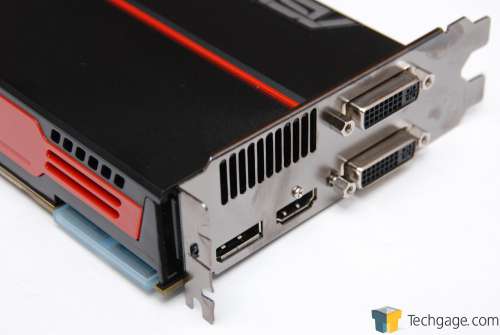 As the card is based on a reference design, there’s not much else to say. Of all the launch cards, what your choice should boil down to is whether or not a game is included, the company’s warranty policy and also whether or not you use the included bundled apps. ASUS’ tools and utilities tend to usually look horrible where UI is concerned, but they’re useful. With that said, let’s get a move on into our look at our test rig and then the performance results.