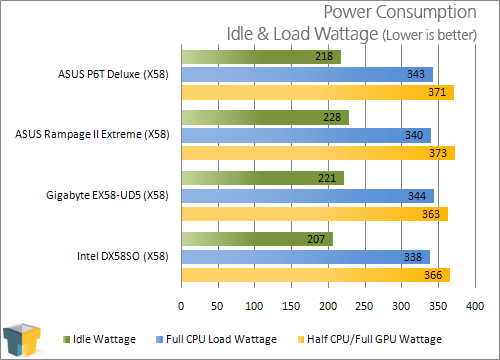 I assumed that with the extra on-board LEDs, the overall power draw would be increased, but that wasn’t really the case, except at idle. At full load, the board was quite comparable to the P6T Deluxe.

With a board as robust as this, it’s difficult to find an opener for the conclusion. The Rampage II Extreme is easily one of the most incredible boards we’ve come across. Its feature-set is huge, and its overclocking-ability even greater. That’s not to say the boards without faults though, and we’ll touch on all of those here.

First, the good. This board was designed for overclockers. It’s not a mainstream board with overclocking features tacked on. Rather, it feels like a board that was built from the ground-up with overclocking in mind, which is something that will be appreciated by anyone who takes overclocking seriously.

In the BIOS alone, we have the addition of the quick-report voltages and temperatures, which in itself is a feature I would love to see on every motherboard, as it’s beyond helpful. Then we have the sheer amount of overclocking-related options at your disposal… including the one that disables most of the on-board peripherals in order to help you achieve a huge overclock.

ASUS then took things further with their TweakIt and overclocking profiles feature. Then we of course have the ports available underneath the overclocking buttons on the board that allow easy-access to voltage readings. Overall, the way that this board caters to overclockers is impressive, and I really do have to ask, “what have they left out?”. 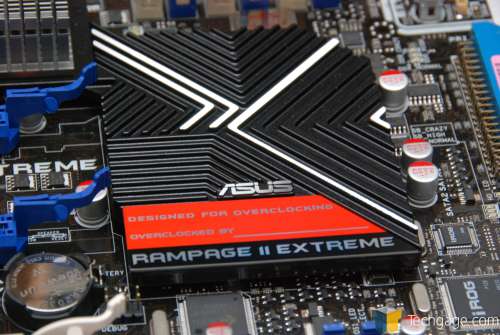 From a design standpoint, the board is great, with more than enough fan connectors and easy accessibility to the 8-pin and 24-pin motherboard connectors. Past that though, I do feel that the slot arrangement should have had some greater consideration. As I mentioned on the first page, if you choose to use a 3-way GPU configuration, you’ll essentially wipe out all of your available ports. Dual-GPU is a bit better, but you still are left with only a single PCI-E 16x port, which can be used for anything PCI-E, regardless of the slot it’s designed for.

The 3-way configuration isn’t a huge problem, but dual-GPU configurations will not be that uncommon on this motherboard, which is why the issue is a little troubling. The top PCI-E 1x port is, for the most part, dedicated to the included audio card, given it’s lack of allowance for a longer card, which means the only port available to you will be the bottom PCI-E 16x. That could be used for a better audio card, WiFi or a RAID card… it’s really up to you. It would have been nice to see at least seven ports, though, since some other X58 boards are able to support that many.

Then we come to an overall lack of connectivity options. I’ll first say that most people will not use an abundance of USB or S-ATA ports, but it’s nice to see such a large collection available on a $400 motherboard, which we don’t see here. Gigabyte’s EX58-UD5, which we took a look at last week, for example, has eight USB on the back I/O and ten S-ATA. Compare that to the Rampage II Extreme which includes six USB on the back and six S-ATA. If Gigabyte can fit all those on a $300 board, what’s the excuse to not see that many on a $400 board?

One problem I see is that even though the back I/O port on this board seems to support room for more ports like this, ASUS included a bracket that can be installed to an available slot to open up two more USB and one additional FireWire. These clearly should have been available on the back I/O port area anyway. You shouldn’t have to resort to an add-in like this, especially since when a dual-GPU configuration is used, your port space is limited as is.

It might sound like I’m complaining over very minor things, and for the most part, I am. These are still things that should be mentioned, though, because for a $400 motherboard, you wouldn’t expect such “issues”. Luckily for ASUS, the motherboard still proves to be one of the most incredible available right now, and that in itself is noteworthy. The board offers overclockers an amazing experience, the performance is top-rate and the feature-set overall is just as you’d expect. If you have this board, it’s very unlikely you will be disappointed, as long as you take note of our complaints here.

The bottom line? This board is fantastic, but it’s up to you to decide whether or not it’s worth your $400.