At Computex 2007, one of the more surprising new products was ASUS’ visually-striking Xonar family of sound cards. This is new ground for Asus, who is better known for their motherboards, video cards, displays, and laptops. However, a sound card from ASUS is huge news, because ASUS products are well known for targeting the high end market, and delivering both a rich feature set and outstanding performance.

As unexpected as ASUS’ move into PC audio hardware was, in a way it makes perfect sense for the company. After all, high-quality audio is centrally important to a compelling media experience, and discrete sound solutions provide an essential upgrade in clarity, impact, and quality over the onboard audio solutions found on many motherboards. Those onboard solutions are usually intended for office PCs and workstations, and rarely deliver a satisfying performance in gaming and media center applications.

The new Xonar family currently contains three products, the D2 and soon-to-be-released D2X desktop audio cards, and the U1 external USB audio station. The D2X product is essentially the same as the D2 in features and capability, but it uses a PCI-Express 1x interface, which at last gives you something meaningful to use your motherboard’s 1x PCIe slots for. We decided to pass on the D2X, however, because we HAD to be one of the first to take this new card for a spin, so we settled for the D2 with its PCI interface.

The Xonar D2 bears more than just a passing resemblance to Razer’s Barracuda AC-1 sound card, which we reviewed earlier this year. This is thanks in part to the steel “EMI Shield” that covers the majority of the card. Its most dominant visual feature is a large ring in the center that glows yellow when powered up. The purpose of the EMI shield is more than purely cosmetic, however, as I’ll explain later. 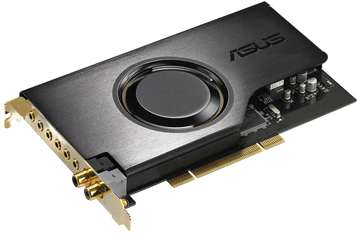 The Xonar cards also feature black PCBs, in keeping with ASUS’ current use of black PCBs on their enthusiast motherboards, and plenty of gold plating to dazzle the eye. From the looks alone, it’s obvious that the Xonar D2 is an enthusiast part through and through.

Beyond cosmetics, the Xonar D2 is a 7.1-channel affair, based on the ASUS AV200 audio processor, which was ‘developed in cooperation with C-Media’, and boasts a stratospheric 118dB signal-to-noise ratio. If that wasn’t enough, ASUS states that the 118dB spec is valid for all seven output channels, in addition to the LFE channel. ASUS further tells us that this is different from some other generic audio card manufacturers, who only give the SNR for the two front channels, and use cheaper signal components for the other channels.

The ASUS Xonar D2 also boasts a wide range of DSP options, including Dolby Digital Live, Dolby Headphone, Dolby Virtual Speaker, and DTS Interactive, though as we’ve seen in the past, C-Media likes to take care of the DSP processing in software, which can mean extra CPU overhead when DSP options are enabled.

We’re excited to have one of the very first of these hotly anticipated audio products to come out of ASUS. If they’ve shown the same attention to detail with the Xonar products as they’ve shown with their enthusiast motherboards, we’re all in for a real audio treat. Could the ASUS Xonar D2 have what it takes to supplant the Razer Barracuda AC-1 as my reference sound card?