On the surface, the driver software for the ASUS Xonar DX audio card appears identical to the driver for the Xonar D2 card we tested in September of last year. You can read our comprehensive look at the Xonar driver’s control panel in that review. However, there are a few differences, primarily relating to the available functionality on the card itself – while the DX card doesn’t offer the ALT feature of the D2 and D2X, it does offer a front panel input header, which requires a different set of software controls for the onboard relays.

Also, the Xonar DX card uses a single jack for the line in, microphone input, and optical digital S-PDIF outputs, so the driver software needs to be able to determine, for instance, whether you’ve plugged in a microphone or a stereo line-level signal to the input jack. 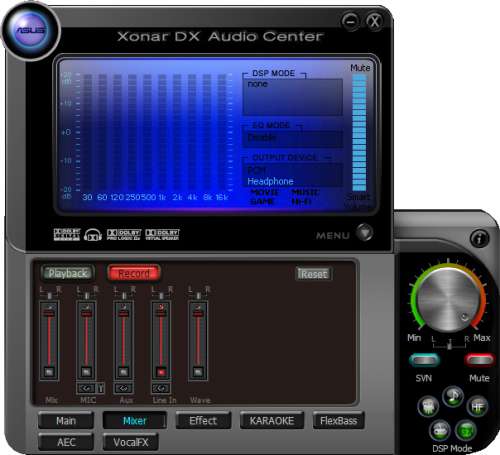 The software-based DSP of the Xonar cards will consume a few more CPU cycles than Creative’s hardware DSP when processing EAX-style effects at EAX 5.0 levels of depth and complexity, but as you’ll see in the testing section, this doesn’t amount to much – even on an older CPU like the AMD Athlon 64 X2 5200+. 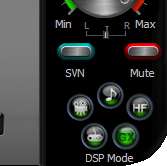 Another important point to mention – ASUS touts significantly better support for EAX 5.0 functionality under Windows Vista than Creative’s own solution, which relies on a translator program for DirectSound calls (Creative ALchemy) to replace the Hardware Abstraction Layer, a design feature of Windows 2000 and XP that was removed in Vista. Games that use OpenAL to handle their audio calls, however, don’t have any trouble under Vista with either manufacturer’s cards.

And now we dive into the testing portion of the article, with a look at the audio performance of the Xonar DX compared with two other cards: the Xonar D2 and the Creative Sound Blaster X-Fi Fatal1ty XtremeGamer Professional Edition. To examine the audio performance characteristics of each card, the test of choice when laboratory-grade testing equipment isn’t available is the ‘loopback’ test, where the analog output from the card’s front left and right channels is routed through the card’s line-in jack.

This isn’t a perfect test – for one, it’s highly dependent on the quality of the card’s input stage as well as its output stage. With the Xonar D2 and D2X, it seemed ASUS had figured out the key to performing well in this test, endowing their cards with excellent input stages, so I’ve also taken the liberty of routing the X-Fi XtremeGamer’s output through the Xonar D2’s exceptionally clean input stage for one test, for a more direct comparison between the high-end cards.

For all testing, I’m using my reference PC, which is a modest mid-range configuration that’s representative of the majority of enthusiast systems in use today. For monitoring the cards’ output, I use a set of German-made Beyerdynamic DT 770 headphones. Their stiffer 250-ohm impedance is tougher for many sound cards to drive, but a card that has plenty of drive voltage on tap has no trouble extracting incredible sound from these sealed cans, with accuracy and detail.

I’ve had significant luck in pairing them with the Xonar D2, but they’re an excellent reference for any source. For each sound card, I uninstalled the other cards’ drivers and installed only the driver for the card presently under test. RightMark Audio Analyzer version 6.0.6 was used for all testing, and every test was performed with 24-bit resolution at a 96kHz sample rate. What’s important here isn’t that every card delivers its rated specifications, but that the results are collected in the same way, allowing direct comparison.

This test held several surprises. First, I didn’t expect the Xonar DX to hang so closely with the reference-quality Xonar D2 card in this test. And second of all, I didn’t expect the X-Fi XtremeGamer to lag so far behind the other two cards. At first, I thought the X-Fi XtremeGamer’s comparatively poorer performance was due to a dirtier input stage.

So to compare the two cards on more even ground, I installed the Xonar D2 alongside the X-Fi, and used the Xonar D2’s line-input instead of the X-Fi XtremeGamer’s. This made a sizeable improvement, primarily in the area of signal-to-noise ratio and dynamic range, but the X-Fi XtremeGamer still lags far behind either of the ASUS cards. Stereo crosstalk increased, though that may have something to do with the quality of the loopback cable used.

The closeness in measured performance between the two Xonar sound cards was also a surprise, albeit a pleasant one – it trounced the Creative card by a margin of 10dB in signal-to-noise ratio, with 20dB more available dynamic range, and 0.003% less total harmonic distortion. Things looked really one-sided when it came to intermodulation distortion between the two cards, with the Xonar DX having only one-fifth the IMD of the X-Fi XtremeGamer. Also, the XtremeGamer exhibited more variation in frequency response over its range.

Among the high-performing cards tested, the Xonar DX provides performance that’s incredibly close to the more-expensive D2 in our audio testing. Let’s look at some CPU usage comparisons to see how the Xonar DX will impact your PC’s performance.