So far, we’ve verified that the ASUS Xonar DX sound card offers performance that’s extremely close to the Xonar D2 and D2X cards from ASUS, and outstrips the next best thing in its price category, the Creative X-Fi Fatal1ty XtremeGamer Professional Edition. However, the primary benefit of the X-Fi XtremeGamer that’s touted by Creative Technology is its hardware DSP, which it claims provides ‘faster, smoother frame rates’ (from product box) because it offloads digital signal processing tasks from the CPU.

Whenever a manufacturer makes a claim like this, the onus is upon us in the tech journalism world to verify it. To accomplish this, I’m using RightMark 3DSound 2.3 to load the test PC’s audio subsystem with varying numbers of simultaneous audio ‘voices’ under various processing situations.

However, also in this section, I’ll be testing both cards under a demo in the game Prey (which you may remember from our EAX 5.0 vs DS3D GX 2.0 article), to see whether the processing of DSP functions in software on the host machine will cause a performance hit in an EAX 5.0 game. Frame rate will be logged, to see what’s having an impact, and where.

This aging benchmarking tool has some serious stability and repeatability issues, but it’s still the only game in town when it comes to a standardized, purpose-built test of sound card performance with a controlled number of sound sources. All tests were performed at a 44.1kHz sample rate under DirectSound, and were performed multiple times with the best results attained during the testing being reported here for each card.

Remember, RightMark 3DSound’s repeatability issues mean that there may be quite a bit of variability in these tests. If one card seems to perform better than another card by 0.001%, that’s a virtually insignificant difference, and well within the margin of error. Still, the results seem to paint a coherent picture of each card’s capabilities, along the lines of what I’d expect to see in this kind of testing. 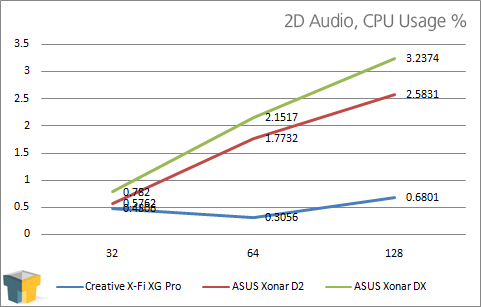 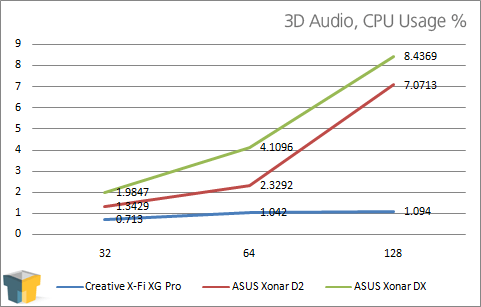 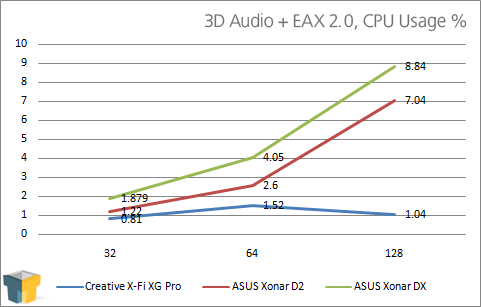 The benefit of the Creative Sound Blaster X-Fi XtremeGamer Professional Edition card’s X-Fi audio processor is readily apparent here, with the X-Fi’s CPU utilization staying below 2%, even with 128 concurrent voices under EAX 2.0. The Xonar DX card performs behind the Xonar D2 in CPU utilization, despite the fact that the cards are based on essentially the same audio processor and signal path.

So what’s different here? Most likely, the PLX PCI-Express bridge chip is placing additional load on the CPU here, while the D2 doesn’t require a bridge chip at all, communicating natively across the PCI bus. The 8% CPU utilization figure for the Xonar DX with 128 voices under EAX 2.0 is a bit troubling – that’s nearly 10% utilization of the CPU for audio processing. The X-Fi card only pulled an eighth of that, even under full processing load.

ASUS’ Xonar DX card also touts its DS3D GX 2.0 driver feature, which promises to deliver EAX-like functionality under EAX 5.0 games. We won’t deal in this article with the question of whether the DS3D GX 2.0 extension set provides an identical sonic experience to Creative’s EAX 5.0, since we’ve already devoted another entire article to the subject, but one other major question that was raised as a result of that article dealt with performance differences under an actual EAX game.

To test this, I used a custom two-minute demo in Human Head’s Prey, which is an EAX 5.0 game. FRAPS was used to monitor FPS performance, and the map used for the demo was the "Keeper’s Fortress" map. The demo playback testing was performed under Windows Vista, to put ASUS’ claims of superior Vista driver support to the test. 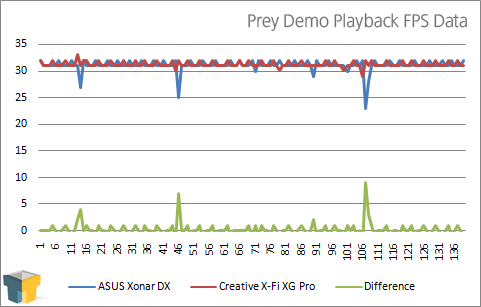 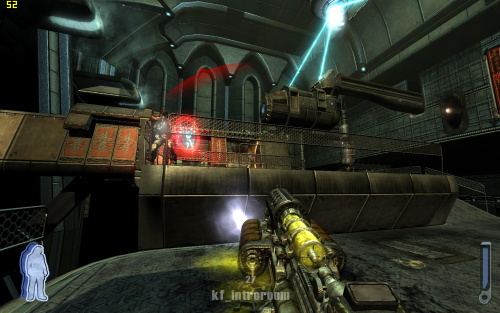 When it comes to the average FPS maintained during the two-minute test, the two cards hang together by mere tenths of a frame per second – hardly a noteworthy difference at all. However, the story here is told by the ‘minimum FPS’ figure. At three points during the demo, a new environment is loaded, and it’s at these points that the system lags more – apparently due to the sound card, since nothing else is changed from test to test.

These deep nulls in the graph appeared no matter how many times the test was run, so they’re almost certainly due to the demo sequence itself, and not an external influencing factor, like background programs. So, while the difference in average frame rates was miniscule and virtually inconsequential, Creative’s claim of ‘smoother’ frame rates on their X-Fi cards would appear to hold up.

Now that we’ve covered all the benchmarking bases, let’s move on to some subjective listening impressions, and then my final thoughts.