Page 1 – Introduction, The Story So Far

When we first reviewed ASUS’ Xonar D2 sound card in September of last year, ‘impressed’ didn’t begin to describe our initial reaction – quite simply put, it rocked our faces off. Several other Techgage authors quickly picked up cards of their own, and were similarly stunned by the competency, clarity, and fidelity. We were sure that Creative’s X-Fi cards had finally met their match, but one gripe that we repeatedly heard from our readers was lack of support for Creative’s EAX versions 3.0 and above.

EAX, now in version 5.0, is a proprietary Creative Labs technology, but versions 1.0 and 2.0 of the specification were made freely available for use by other manufacturers, a practice that ceased with version 3.0. It was a clever scheme – versions 1 and 2 of EAX were hugely popular, and gamers hoping to take advantage of the technology’s newest iteration would have to choose Creative hardware exclusively.

So what exactly is EAX? The Environmental Audio eXtensions (EAX) is a proprietary sound API that allows developers to use the onboard digital signal processing capabilities of Creative’s audio chips to produce more realistic virtual environments through simulated environmental reverb and occlusion effects.

The centerpiece of EAX is hardware-based signal processing, controlled directly through the software itself, which is why we were surprised to learn that ASUS had released a new driver revision for their Xonar cards, enabling “EAX 5.0 Support”. We initially assumed that ASUS’ driver wizards had come up with a way to mimic the Creative X-Fi’s onboard DSP through the driver software itself, in the same way that Dolby and DTS processing are handled. 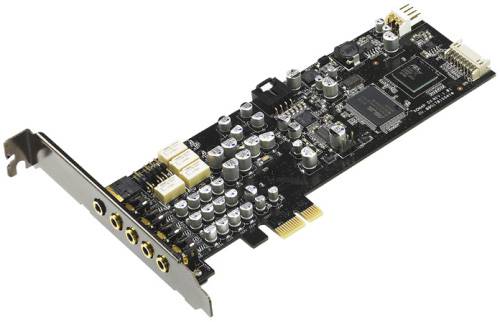 According to ASUS, the benefit of this approach is that it removes the need for an abstraction layer to provide a direct connection between DirectSound and the audio driver. Windows Vista eliminated the Hardware Abstraction Layer (HAL) of Windows XP and 2000, severing this direct software link between drivers and applications, and leaving owners of Creative X-Fi and Audigy cards without surround sound or EAX effects under Vista.

Creative responded to this problem with the ALchemy software upgrade, which mapped DirectSound3D calls to equivalent OpenAL calls. Because OpenAL is third-party software, it was not crippled by the loss of the HAL, and this approach re-enabled the lost functionality. But while this software fix is available to X-Fi owners at no extra charge, Audigy card owners will have to cough up $9.99 simply to download the compatible fix. In addition, not all game titles are supported. ASUS says their Xonar sound cards function without this limitation, even while using EAX functionality.