In order to be a serious contender in the world of audio cards, ASUS knew early on that driver support would be paramount. And the Xonar cards have always enjoyed fairly robust drivers, with virtually none of the bloat that many have criticized in the drivers of ASUS’ closest competitor, Creative Technology. ASUS’ Xonar drivers up to this point have shared the same intuitive user interface across the range, and the Xonar Essence STX continues that tradition. 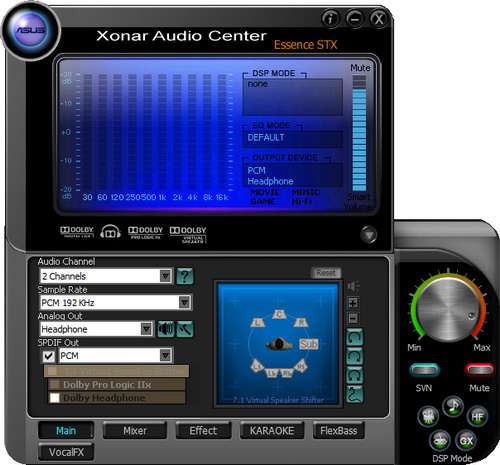 To activate the card’s built-in headphone amp, you’ll need to set the “Analog Out” option to ‘Headphone’ – the headphone output isn’t enabled by default. The control panel also allows you to enable Dolby Headphone or Virtual Speaker processing, which lets you enjoy virtual surround-sound through your headphones or stereo speakers.

One unexpected bonus is the card’s ability to support multichannel output via its digital output jack, so it’s possible to use the control panel to configure the card to output a 6 or 8 channel signal via its digital output as well as a 2-channel one. However, the main focus of this card is its analog signal purity, so if you’re connecting the Essence STX to a high-end audio system, you’ll want to simply use a set of quality cables to connect the card’s analog outputs to your receiver or high-end preamp unit.

Testing the Xonar Essence STX’s hardware proved to be a challenging proposition. This unique audio card is capable of signal-to-noise ratios that are so great, even the quality of the cables used can have an impact on the results, and the kind of laboratory-quality testing equipment that ASUS used to measure the card’s 124dB signal-to-noise ratio is in short supply around here. However, we’re loathe to leave you without some representation of the card’s performance, so we’re willing to accept a little bit of a compromise in our data gathering methods in order to show other facets of the card’s performance, such as frequency response.

The measurement method that has worked well for us in the past is the ‘loopback’ technique – where the sound card’s output is routed through its line input, and the card simultaneously plays back and records a signal. Then the signal is analyzed by the host PC to generate the data you’ll see below. This method only works well if the card has a high-quality input stage, and ASUS’ higher-end Xonar cards are famous for having an input stage that closely matches the quality of their output side.

The performance of an audio card isn’t significantly affected by the performance the host PC’s other hardware, and this setup represents a modern mid-range machine with modest specs in virtually every area. One detail to call out, however, is the choice of reference headphones for this audition. The German-made Beyerdynamic DT 770 headphones have a rather high impedance of 250 ohms, which makes them a difficult load even for beefier sound cards that provide the drive voltage directly from their opamps. These headphones positively soak up voltage, which makes them perfect for evaluating the Xonar Essence STX’s built-in headphone amp.

All audio testing was performed using RightMark’s Audio Analyzer 6.2.1, which at present is the only packaged solution for performance-testing of sound cards. To showcase the card’s best performance, the tests were run in 32-bit/192kHz mode.

Let’s kick the analysis off with a bang – the results above are the best we’ve ever measured from any sound card, ever. Despite the fact that we relied on the admittedly fairly imperfect ‘loopback’ test, we measured an incredibly low -116.1 dB noise level, and less than one thousandth of one percent total harmonic distortion. The combination of ultra-low noise and vanishingly small distortion percentages means that this card should deliver audio that is unusually pristine, clear, and dynamic.

The limiting factor in this test is the card’s input stage, which it shares with the Xonar D2 family. The input stage of the card is only capable of a 117dB SNR, which is still excellent, so the fact that we weren’t able to measure the same ultra-low 124dB signal-to-noise ratio from the card’s output stage is due to an inherent flaw in our testing method when compared to ASUS’ laboratory-quality testing, and not related in any way to an inability by the card to produce its stated signal-to-noise ratio.

The objective testing results paint the Xonar Essence STX as a stellar audio performer, but how well does that translate into a more enlightened listening experience? Hop to the next page for the most important testing of all: listening.