When you first fire up the drivers (after you finally get them installed) you’re greeted by this slick user interface. Clicking the menu button causes the spectrum analyzer to slide up like this: 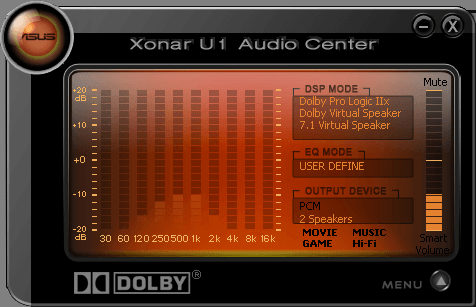 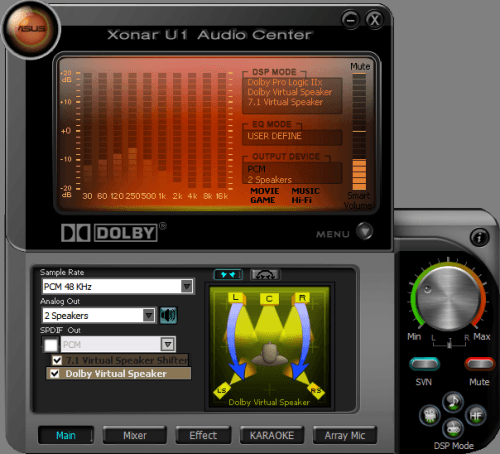 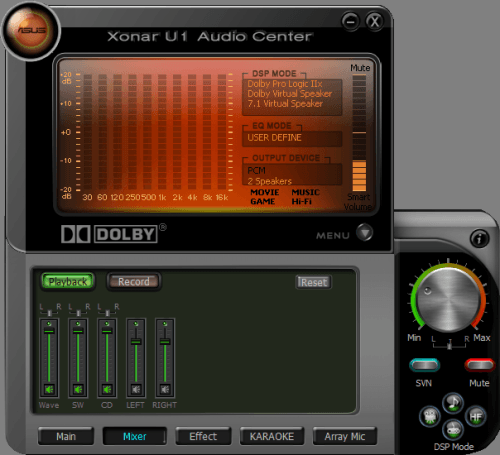 Punching the mixer button brings up the mixer (big surprise, huh?) with buttons to choose between record and playback. 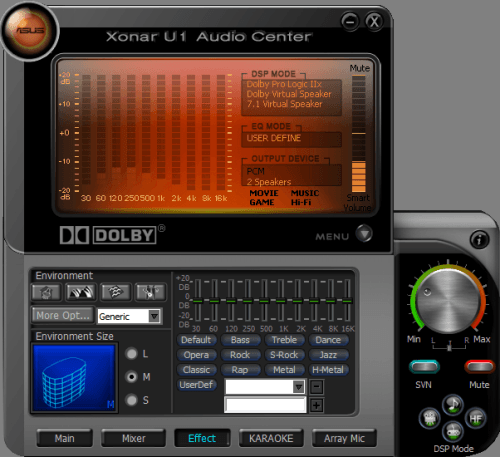 Punching up the effect button brings up the digital soundfields along with the EQ. Oddly, if you’re using any of the DSP modes (below the volume knob) and you punch in any of the EQ modes, it turns the DSP mode off and sets it to "User Defined". This simply turns the button’s color from lit green to being dimmed.

Since I’ve brought up the volume knob, I’ll touch upon the fact that it doesn’t make an appearance until you hit the menu button. In fact everything to the right of the spectrum analyzer isn’t there until then. Hitting the menu button makes it all magically appear.

The SVN button is for keeping volume levels at a constant level. It compresses loud sounds and boosts soft sounds which is nice for movie listening when you find yourself scrambling for the volume knob constantly. For music listening I found that it was less than desirable as it choked the music back too much and muddied transient responses.

I know I’m skipping over the digital soundfields but that’s because I find them largely useless. They’re too strong to make extended listening worthwhile, they end up being a detractor from the experience. Until ASUS decides to put a mix slider in place they’ll continue to be more of a distraction than a benefit. 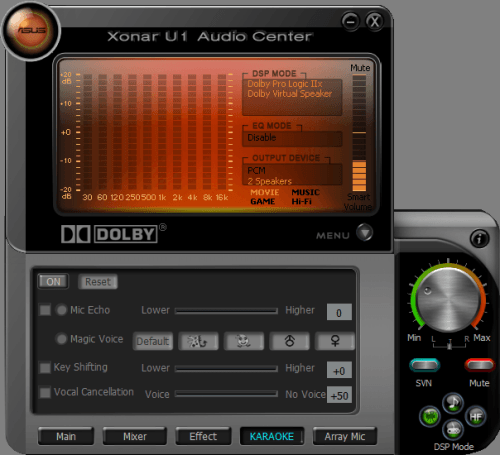 The mic echo works pretty well allowing you to go from a fairly dry mix to a wet mix that’s just dripping with reverb. Magic voice is the least useful thing there, making you sound like anything from a chipmunk to lurch. Good for laughs but that’s about it. 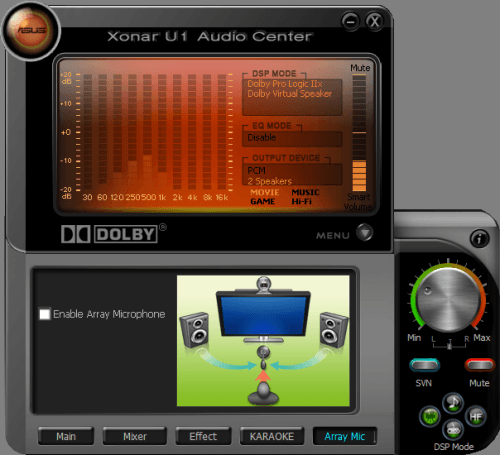 The array mic button brings up the toggle to turn the array mic on or off. Pretty simple.

Now that we’ve waded through the drivers I’m going to discuss the issues I had installing them. ASUS says to hook up the U1 and cancel the new hardware wizard and instead launch the software to install the driver from the CD. Doing so brought up the installshield wizard which went about installing the drivers.

Everything hums merrily along until the drivers start looking for the hardware and then things go pear shaped. Windows disallows the install since the driver is unsigned, the driver fails to install and you get a message telling you to reboot the PC and try again. Upon rebooting and trying again the same thing happens.

I ended up starting the found new hardware wizard, telling it to find the drivers automatically and okay’ing the unsigned drivers every time I got the warning. Wait, it’s not over. After that I had to reboot the PC, start the installshield wizard and go through the driver install from there before the violet LED’s finally turned blue and the drivers were recognizing the U1.

I don’t blame the drivers as much as I do Windows. After a slew of updates, Windows has become so paranoid about unsigned drivers that native drivers in Windows cause problems with everything from USB mice and keyboards to plug and play monitors. Do you know how annoying it is to hook your mouse up to a different USB port than the one it was hooked to when the OS was loaded to only barf up and unsigned driver alert and you end up with no mouse? If so then you know what I’m talking about.

Anyway, after fighting with Windows, I got the driver installed and took the U1 for a spin (again, no pun intended). On to testing!