The original BioShock is on AMD’s list of Eyefinity “Ready” titles, but the sequel is not. In our experience though, the game runs great at 5760×2160 and good at 5760×1080. The reason for the “good” is evidenced in the screenshot below. Notice that at 5760×2160, you see a lot of the game world? At 5760×1080, your screen is absolutely dominated by your helmet. Admittedly, I didn’t even notice this while playing, but it’s hard to ignore once you actually clue into it. I can begin to understand why this game is not on AMD’s list of supported software, and once again, this is a title that looks far better on six monitors than three.

Like so many of the other games we’ve tested, this one also suffers from a stretched menu system, and because it’s so extreme in this case, I captured a screenshot to show it, which you can view here. It’s nuts, huh? Fortunately, we didn’t experience similar issues while actually playing the game. 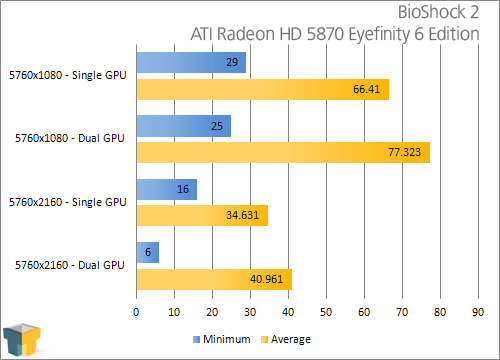 BioShock 2 is one of those rarer titles that don’t require super-high framerates to remain fully playable, so while 34 FPS at 5760×2160 seems lackluster, we considered it to be just fine. The gameplay was still fluid, so that’s all that counts.

A handful of titles we tested with didn’t fare well with CrossFireX testing, and this is one of them. The game locked up at certain points, but only for a split-second, and at both resolutions, texture tearing was very evident. Again though, as the game runs fine at max detail with a single GPU, this isn’t a major issue, but will hopefully be fixed in a future driver update.

Although our performance for CrossFireX was good, it simply can’t be played with today’s driver. The performance increases as a result of that seem minimal, due to the locking-up of the game severely lowering the averages. For now, single GPU is the only way to go here.

C&C 4 is another title found in AMD’s “Ready” category, as overall, it looks fantastic at both resolutions we tested with. We assume that the reason the game lacks a “Validation” tag is that the in-game UI is less-than-ideal from an efficiency standpoint. Both of the main in-game elements you need to click around often are found on the stark opposite sides of the the gameplay screen, which means you have to work your mouse quite a bit to get back and forth. Ideally, these would be movable, but sadly they are not. 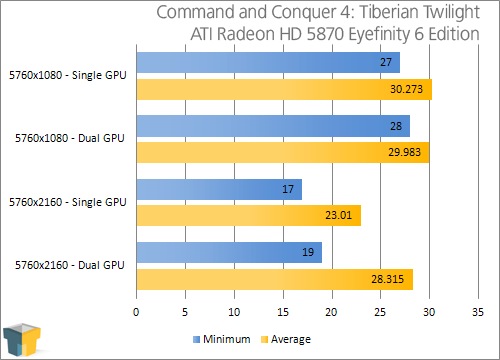 Although this game offers a Vertical Sync option, disabling it does absolutely nothing to the frame rate cap, so at most, you will see no more than 30 FPS at any given time. Whether or not this is a driver bug issue, I’m unsure, but as it is, the game is still silky smooth at 30 FPS. Honestly, even the 23 FPS that a single GPU at 5760×2160 gave us was perfectly acceptable. During gameplay, I didn’t even realize we lost 7 FPS off of 30, so that’s saying something.

Because of the frame rate cap, our only real goal was to retain frame rates as close to 30 as possible while delivering the best graphics possible. For all but our single GPU 5760×2160 configuration, the game could be bumped up to max detail levels, with 0xAA (for some reason, even minimal AA brought the game to a crawl). For 5760×2160 with one GPU, High detail levels remained.