This title looks quite good on Eyefinity, and with reasonable menus at 5760×2160, but it suffers the same issue that F.E.A.R. 2 did. Even though 5760×2160 is selected, only a portion of the entire display area is used, as seen in the shot below. Also like F.E.A.R. 2, 5760×1080 didn’t work as the game was confined to the center screen. Both of these games use entirely different engines, so it’s a bit strange that both suffer the exact same issues with Eyefinity. 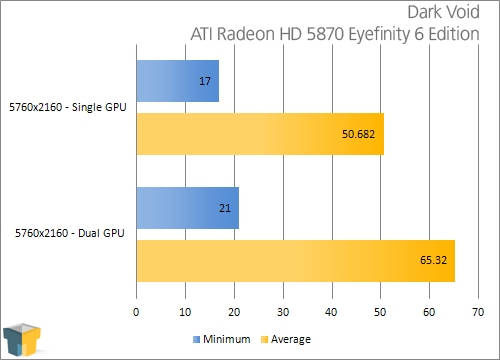 Dark Void as a whole isn’t quite as demanding graphically as other select titles that we’ve used for testing, and we pulled away with very playable framerates even with a single GPU. Interestingly, we gained very little with CrossFireX, as the game simply doesn’t seem to be pushing both cards hard enough.

As you probably expected, as we originally tested the game with maxed-out detail settings, no further tweaking and testing had to be completed.

On our page for GRID, I mentioned that racing games are ideal for multi-display setups, and Dirt 2 furthers that fact. Simply put, playing this game on either a 3×1 or 3×2 configuration is fun. It didn’t surprise us at all to see this game on AMD’s Validated list, as it should be -the- game to show people what Eyefinity is made of. If there is such thing as “perfect” when it comes to an Eyefinity game, Dirt 2 is certainly it.

Oddly, at 5760×1080, the in-game UI is confined to the center screen, unlike 5760×2160 where it’s at the edges, but I believe this to be for the best (and it could have been done on purpose). It’s much more natural to have it placed as it is, as it’s much easier to reference. At 5760×2160, the displays are so big that having the UI elements on each side is acceptable. 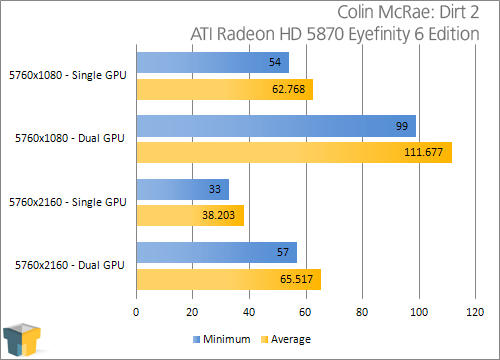 Once again we have completely playable framerates at Medium-to-High detail levels (half of the options were Medium, the rest were High… too many different options to list!). Given that this is a racing title, high framerates are preferred, so for single GPU 5760×2160, we left our default settings alone. The rest, though, were all high enough to allow us to do some tweaking, which we did.

For both 5760×1080 configurations, the Ultra High detail preset could be chosen. For dual GPU at 5760×2160, some tweaking had to be done, and we found what we show above to be the perfect mix to deliver a still stellar-looking game and very playable framerates.