Sure, this game may be ancient by gaming standards, but guess what? It works well with Eyefinity. That includes the menus as well, although since they don’t scale with resolution, they are rather tiny. In-game, everything is perfect, from the UI to the game world itself. It still impresses me just how well some older titles work with Eyefinity, and then we have newer titles like Dark Void, F.E.A.R. 2 and even Modern Warfare 2 that don’t. 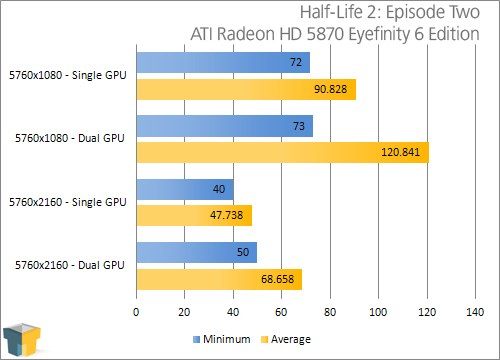 As Episode Two is aging, it was no surprise to see that it ran well across all of our configurations. At close to 50 FPS at 5760×2160 on a single GPU, CrossFireX shouldn’t even be a consideration here. It’s nice to have, but even the effect with it isn’t as large as we’d hope.

Admittedly, we could have raised the anti-aliasing a bit and ran with that, but honestly, 4xAA is still quite good and at these large resolutions, anti-aliasing at all is generally harder to notice unless you are really looking. As it stands, all of our configurations delivered great framerates, and as the game scales so well with Eyefinity, it’s an older title that definitely deserves another run through.

Of all of the games we tested with here for Eyefinity, Just Cause 2 has to be one of my favorites from a graphics standpoint. Seriously… this game is amazing to just look at. Ever notice that in most games, details in the distance are usually severely degraded? Not so in Just Cause. If you see a city five miles away, you’re not going to see some sprite or texture, but real detail. The same goes for when you look far down mountains… even the foliage remains. It’s nice to see a game finally push graphical boundaries like this.

Fortunately, the game also looks very good on Eyefinity, with no stretching or other oddities to be found anywhere. This game surprisingly isn’t Validated or even Ready, but I’m sure that will soon change as we found it to be a great title to show off the technology. 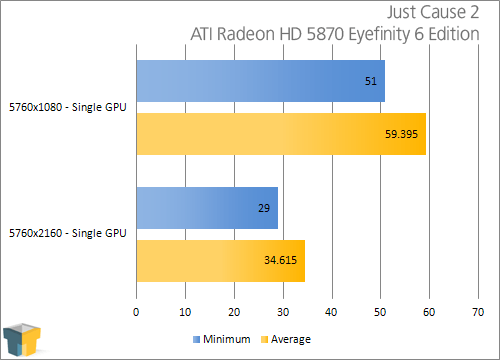 Unfortunately, while the game looks great with Eyefinity, this is another one of the titles we tested with that didn’t agree with CrossFireX much at all. Like the others that gave us issues, this game slowed down at parts and halted in others. Again, I expect many of these issues to be patched up in a future driver release.

As our framerates were borderline acceptable at 5760×2160 with normal detail levels, we left things as they were. For 5760×1080, however, we were able to completely max out the detail levels and still enjoy playable framerates. Not bad for a game that looks as good as this!