Metro 2033 is a game I like to consider “The Next Crysis”, because it’s beyond playable at the game’s highest settings on most of today’s resolutions, regardless of your PC. It’s brutal, it’s that simple. But unlike Crysis (in my opinion), Metro 2033 actually looks the part, and gives definitive proof about why so much graphics horsepower is required to run it. It’s for that reason that this game is likely to become implemented into our regular GPU test suite soon.

This game is yet another to be neither Validated nor Ready, but we saw no reason for the omission. The menus looked great, as did all the fonts, and of course the UI and game world. There were simply no graphical oddities during our time spent with the game, so I suspect AMD will give it props in the near future for its friendliness to Eyefinity. 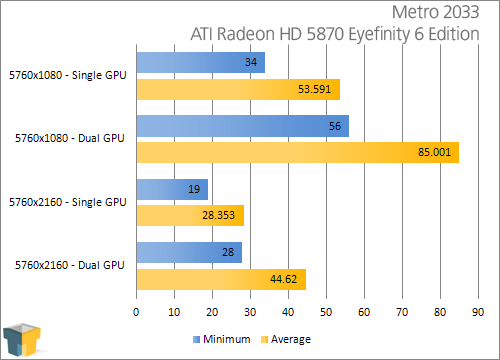 At the game’s Low detail setting, both configurations at 5760×1080 ran just fine, with extremely good framerates. At 5760×2160, the dual GPU configuration allowed us to stay with those detail settings, but with one GPU, things are again a little bit borderline. Unfortunately, we were running with the lowest in-game detail settings, so at that point it was take it or leave it.

Both 5760×2160 configurations stayed put, while we were able to increase the settings for both the single GPU and dual GPU configuration at 5760×1080. With a single GPU, we were able to go to Normal detail, while with two, we were able to use High. At that detail setting, the game looked unbelievably sweet, and as you can see, the framerates dropped quite a bit as well, but it was still completely playable.

Our third and final racing title used was SHIFT, and thankfully, it didn’t disappoint. As an official Validated title, this one delivered exactly what we were hoping for. Menus with no issues, good UI placement (of which there is little to begin with), and a perfectly-rendered game world. As this is a Validated title, you can expect Eyefinity perfection, and from our experience, that’s what we got. 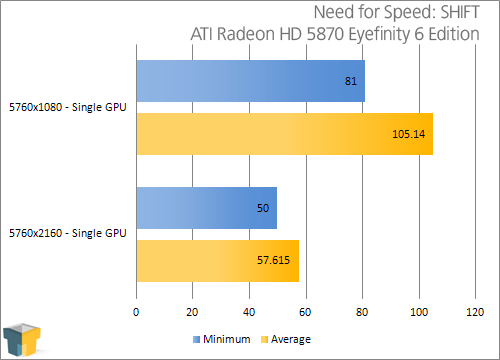 Like Just Cause 2, this title looks amazing, but didn’t fare well with CrossFireX. These issues seem to be an obvious trend, so I suspect there could be something specific in the driver that needs tweaking, and not just a specific game profile. Again though, even with one GPU the detail settings and performance is fantastic, so at least we have that.