I mentioned earlier that Just Cause 2 has some of the best graphics out there, but Conviction comes in a close second. It’s not quite as refined as Just Cause 2 in some areas, but it’s still unbelievably detailed. Aside from that, it also happens to be a very good game (from what I’ve played so far), and it also runs very well on Eyefinity.

Menus, in-game UI’s and game world itself were all rendered with few oddities. One oddity I did face can be seen in the top image. If you look in the distance, the houses are sitting atop nothing, while they are supposed to be sitting atop water. Other oddities like this may exist, but in my limited amount of progress into the game, that’s all I noticed. 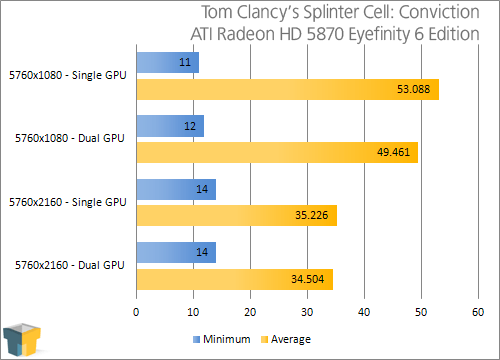 Why is it that the best-looking games seem to have the most trouble with CrossFireX? Once again, there was absolutely no performance difference with CrossFireX, unless you count that decrease of performance at 5760×1080. If you’re an Eyefinity owner, or soon to be one, we can all hope that these driver fixes will be pushed through sooner than later.

On all of our configurations, the Medium detail preset delivered the best gameplay experience. Raising the detail at 5760×1080 delivered more lag than we could handle, so we stuck with Medium. If the CrossFireX issues get ironed out, I’m sure that at least the 5760×1080 settings could be increased to High.

Unigine isn’t a game, but rather an automatic benchmark. Though we generally dislike timedemos or anything that resemble them, we usually include just one for the sake of it. Normally, that’s 3DMark Vantage, but for whatever reason, it was unable to detect our resolution of 5760×2160. Interestingly, it was the only “game” that we loaded up that wouldn’t acknowledge that resolution, so that was a bit strange.

Heaven stood up to the plate and delivered the timedemo gooey goodness we wanted, and as you’d expect, the performance was horrendous… even with tessellation disabled! 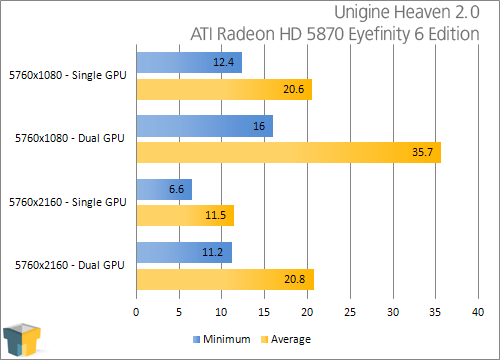 The best “playable” result was at 5760×1080 with dual GPUs, and that was without tessellation, so it’s easy to understand just how hardcore of a test this really is. Scaling across the resolutions and with and without CrossFireX was rather perfect though. If only we saw the near 100% increase with the rest of our games with CrossFireX enabled!