When AMD sent us its Radeon HD 5870 Eyefinity 6 graphics card along with six displays to take advantage of it, I didn’t quite know what to expect. Aside from what I’ve seen during various meetings and on trade show floors, I didn’t have much experience with any multi-display gaming. Nor did I even truly understand its benefits, such as the increased level of immersion.

Before I even began testing, I assumed that my conclusions were going to be along the lines of “3×1 is fantastic, and 3×2 is limited”, but that’s a little bit off. I was surprised to realize that I actually enjoyed using the 3×2 configuration quite a bit, and not only in racing games. There are definite downsides, but when I stand back to look at the big picture (no pun), I can’t help but feel like I’d hate to go back to a single display, or even 3×1.

The biggest disadvantage to a 3×2 configuration is that the bezels can impede gameplay in certain instances. If you’re playing an FPS title, then your crosshair is likely to be smack-dab in the center of the middle bezels, and that’s obviously problematic. Even with that issue, I still ended up enjoying FPS titles more with the 3×2 configuration than 3×1, simply because the games felt more alive… my vision wasn’t impeded… I saw all around me.

After putting some thought to this, I realized that the reason I prefer 3×2 is because our 3×1 configuration, with its 22″ displays, is just not satisfying enough. It’s hard to call a 22″ display small, but in reality, it certainly is when you are pairing three of them together. Personally, I feel that for Eyefinity, or multi-display technology in general, to deliver a truly immersive experience, the displays play a huge role. If you’re playing a game and can easily see over the displays and subsequently the rest of the room you’re in, that’s not immersion. Because a 3×2 configuration of any display size is going to be large, the immersion level goes up.

If I had to choose the “ultimate” Eyefinity configuration, I think I’d have to lean toward 3x 30″ displays. I do say this without actually testing out that configuration, but it’s clear as day to me the benefit that would have. You’d essentially have the best of both worlds… huge gameplay area, and still total immersion. With 3x 30″ displays, the total resolution would be 7680×1600, and while the aspect ratio is slightly different, the pixel count is almost identical to 5760×2160 (12.28MP vs. 12.44MP). 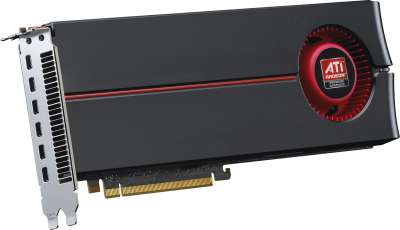 When AMD sent us this Eyefinity kit, it expected a review of the graphics card like most any other we take a look at, but since we’d never delved into the technology before, I felt that a full-fledged article/review was necessary, because during all my testing (estimated about 75 hours of actual playtime and probably 10 hours of raw trouble-shooting), I discovered a lot, and came to appreciate Eyefinity a lot more.

By now, you are probably aware that I’m stoked for Eyefinity, but even though I’ve provided a ton of screenshots and other bits of information to explain how cool it is, I can understand that it may still be difficult to truly appreciate by my word alone. I stumbled on a cool tool at AMD’s “Underground” website that does a better job of explaining it than I can without video.

With that tool, you can essentially see what games look like with and without multiple displays, and as you can flip back and forth between Eyefinity and non-Eyefinity, the differences are clear. I believe the examples are a little exaggerated, but not by much. Having multiple monitors doesn’t just take your one screen and turn it into three… you actually do increase the amount of the game world you can see.

I think I’ve about covered all I can say about Eyefinity, but to touch on the Eyefinity 6 edition card, if you are looking to actually get hooked up with six displays, this card is a good purchase. It’s pricier than regular HD 5870’s, but that premium includes the dongles you will need, along with the fact that the card features 2GB of GDDR5. If all you plan to run is a three display setup, a regular HD 5870 will be fine, but I do recommend springing for a 2GB model as you are going to be pushing 50% more pixels than 2560×1600.

As much as I’m a new-found fan of Eyefinity, there are a few blatant issues I’ve experienced with the technology that should be mentioned. Bear in mind though, a lot of this might be due to the still work-in-progress driver, so it’s hard to conclude on any issue being a real problem as it could be wiped out soon. The most frustrating issue I experienced during testing was when a display at random would decide to go inactive when I enter a game. Bad Company 2 was the worst offender for this, and as a Validated title, I found it odd. This in particular I do really believe to be a driver issue, so I have little doubt that it could be patched up in a forth-coming release. 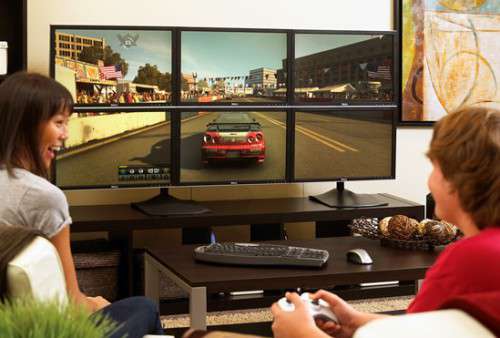 Although this isn’t a serious issue, one other thing I found a bit strange is that if you accidentally (or purposefully) turn off a display while your PC is on, the driver will waste no time in reconfiguring itself. This seems fine for the most part, but the fact that it can take the driver about 1 minute or even more to sort itself out is a little rough. Even that by itself is fine, but sometimes you even have to recreate a group to get the proper 3×2 configuration again, because if you turn a display on and off, the driver sometimes treats that newly turned-on display as an extended desktop, rather than part of the bigger display.

The most frustrating part to this bug is that if you turn off a display while in a game, the game is made useless. Your only solution is to exit it, fix the display group and then load it back up. This problem as a whole seems rather minor, since it can be avoided by simply not hitting the display, but I do believe the driver should have an option to ignore a turned-off display, as it would solve the entire issue.

As far as real gripes go, those two are all that spring to mind. Aside from those, setting up Eyefinity was a breeze, including the bezel compensation, and for the most part, my experience with all of the games I tested was great. There was never an issue with screen savers or power management (such as sleep, hibernate), either. There were some games that didn’t cooperate as well as others, but that’s not the fault of Eyefinity, but rather the fact that the games simply were not built for multi-display gaming. Those games that were simply look amazing.

So where’s NVIDIA in all of this? It also offers multi-display gaming, up to three displays, but I haven’t had much of an opportunity to put it to good use. One benefit NVIDIA has over AMD is that it can offer 3D Vision support in certain titles, which some may appreciate (I don’t have the binocularity for 3D, so I can’t tell the difference). Given the market’s current offerings, though, unless 3D is important to you, AMD offers the better package right now, as Eyefinity is well supported by many of today’s top games. You can also take things like power consumption into play also and AMD still comes ahead (when compared primarily to the GTX 480). I hope to be able to spend time with NVIDIA’s multi-display technology in the future to gain a better understanding of what each side offers, and which one excels where.

I didn’t expect to walk away from this article so sold on multi-display gaming, but it’s happened. If you’ve never considered it before, I urge you to give it a try if you’re able. If you’re a diehard gamer, multi-display is where it’s at. Once you play with Eyefinity for any length of time, you will have a very, very difficult time going back to anything else.