Regardless of the GPU we’re testing, Crysis Warhead is -the- game that brings even today’s highest-end graphics cards to a crawl at good detail settings, so I really had no idea of what to expect with Eyefinity. I was quite surprised, though. Not only with performance either, but how good the game looked with both configurations. The menu screen is less-than-ideal, but the in-game UI in my experience has been perfect. 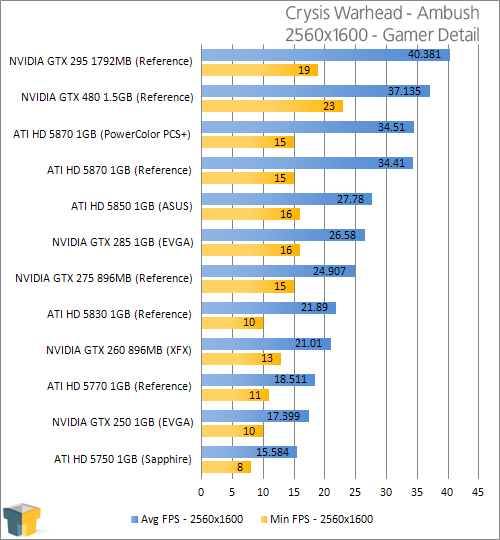 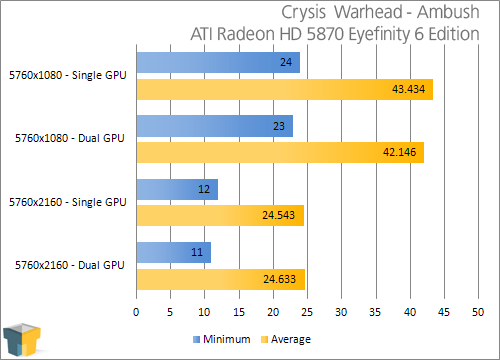 Please note that for our usual GPU reviews, we test this game with the Gamer profile, but because that proved a bit too much to handle here, we dropped all of our base Eyefinity tests to the Mainstream profile.

As you can probably tell by the performance above, CrossFireX proved to be ultimately useless, showing no difference in frame rates whatsoever across our testing. There is an exception, though, seen in the table below. There, CrossFireX did make a difference when we increased the detail level at 5760×1080.

For for whatever reason, Mainstream doesn’t seem to require enough GPU brawn to push CrossFireX, but on the other end of the stick, we were only able to increase the detail on that one configuration. Because the GPU driver is still considered a work-in-progress, I’m willing to push the blame there, and hope that a future driver release will patch up the strange issue.

Because CrossFireX didn’t bode too well for our 5760×2160 testing, we had to mix our detail settings up a bit at 5760×2160 in order to achieve playable frame rates and not have to stick Minimum detail settings across the board. For 5760×1080, two cards allowed us to hit the Gamer profile and see some great performance.