The first genre to come to mind for me when picturing a multi-display setup is racing, and if you’re a fan of the genre, then you probably understand why. You simply get so much of the big picture and it feels a lot more realistic. It’s also one of the few genres that makes it easy to ignore the bezels. After playing various racing games with all six monitors, I can honestly say I’d hate to go back to anything else. It’s an absolute blast.

Despite GRID being released long before Eyefinity, the game looks remarkable at both resolutions. The in-race UI isn’t placed ideally (you may disagree), but it doesn’t impede gameplay at all. The game scales well, with no stretching aside from the menus (a common issue)… in-game, it looks great. The proof is in the screenshots above. 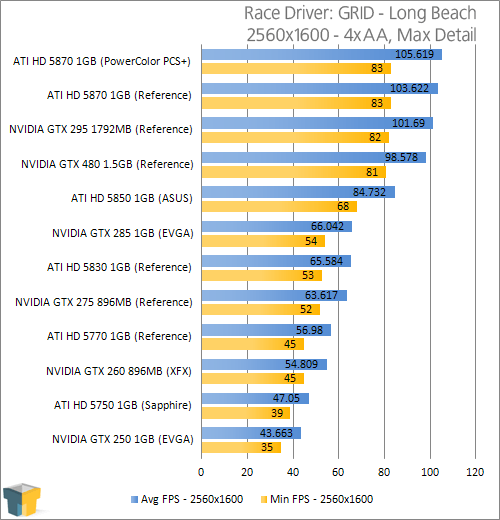 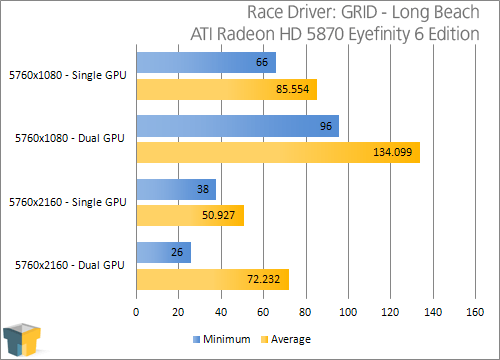 As good as GRID looks even by today’s standards, the performance was good all-around at maxed-out detail settings, which includes 4xAA (the game doesn’t run well with higher AA levels for whatever reason, and it’s not Eyefinity-specific).

Unfortunately, the game didn’t agree with CrossFireX at 5760×2160, as sporadically during races the game would just slow down, or lock up for a split-second, essentially ruining the gameplay. There was no such issue at 5760×1080, however. Thankfully, a single GPU is all that’s needed to deliver very playable framerates, so the lack of CrossFireX is a non-issue.