To kick off our special collection of titles used for Eyefinity testing, we start with Aliens vs Predator, one that has earned AMD’s “Validated” marking, meaning that all aspects of the game scale to Eyefinity just fine and no abnormalities should be seen. From our experience, that’s absolutely true. The game menu is just fine, along with the in-game UI and of course the game world itself. 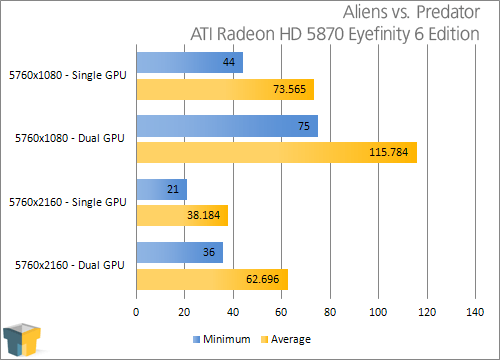 As gorgeous as the game is, it still surprisingly ran quite well with normal detail settings across all of our configurations… even 5760×2160 with a single GPU! At 38 FPS, the gameplay wasn’t as smooth as could be, but it was still very playable. There’s a definite trade-off in some cases between performance and detail levels, and when you’re playing on such a monstrous display, you generally want the best detail level possible.

All but our single GPU 5760×2160 configuration required extra tweaking. Fortunately, for those three that were changed, the graphics were bumped up, and when equipped with two cards, max detail settings are just fine even at 5760×2160. The reason for using 1xAA is that the game doesn’t allow 0xAA, and even 2xAA caused us issues. The game would run sluggish at first with higher AA, and then iron itself out, but then slow down in points throughout the level. Therefore, 1xAA is really the only option.

Like AvP, Bad Company 2 is another Validated title, and throughout all of our trial runs, we can understand why. Everything again scales perfectly, even the main menu. In-game fonts and UI is also fine, and the game world scales just as you would expect it to… it’s all very natural. Strangely, though, in-game cut-scenes, despite being shown with in-game graphics (not video), did not fill the entire screen. Rather, it would take up about 70% of the entire resolution on average. Even more interesting is that while all in-game cut-scenes did this, some scaled differently. This is far from being a game-breaker, but it’s interesting enough to mention.

One bug I do consider to be somewhat major though is that on occasion, one or more of the displays would become inactive as I logged into the game. This isn’t a rarity, happening about once per four times. If it does happen, sometimes an alt-tab will help, but most often we had to restart the game entirely. The last time we experienced this issue, we had to restart the game four times before all six monitors would stay active. I assume this to be a driver bug, and expect it to be fixed in the future. Although BC2 wasn’t the only game that had this issue, it had it far worse than any other. 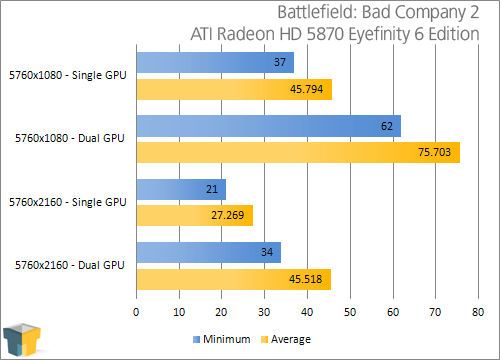 All but our single GPU 5760×2160 configuration handled the game well at Medium detail settings. In order to reach a more playable level at 5760×2160, a second GPU needs to be added, and it makes all the difference.

For our single GPU configurations, 5760×1080 must stick with the Medium detail setting to remain fully playable, while at 5760×2160, the only real option is to drop down to the Low detail setting (which still happens to look quite good). For dual GPU, our beefier resolution can retain Medium detail settings, while for three monitors, you can boost the details up to High.