If you are a Linux enthusiast, chances are good that you already know everything I am about to say. Chances are even better that you tried a variety of desktop environments before settling on one. If you are a newer Linux user though, say, from the Ubuntu or SuSE crowd, it may be that you don’t even know that other options are available. Some distros like SuSE do include more than one environment though, while Ubuntu (or Kubuntu) only include the one. Even with those feature packed distros like SuSE and Sabayon, have you ever tried the other desktops that are probably already there?

You may be asking yourself, “Why would I need a different desktop environment?”. There are multiple reasons for this. First, you may be bored of the one you are using, or wish it was more user friendly. Second, each environment is developed by people with varying goals, so you can expect different functionality with each. There are more reasons, but perhaps one of the biggest ones if that you want a “lighter” environment in terms of CPU and memory usage. This is especially important on older machines or personal servers. Because of this, we will be taking a look at a few of the minimalist environments including Fluxbox and FVWM-Crystal.

One thing to take note of, is that the process of installing a new desktop environment on your distro may be different from how it’s done on another. It may be very simple under one, but a complete headache under another. My distro of choice, Gentoo, makes it quite easy to install new environments as long as it’s considered stable. If your distros software repository doesn’t have the files for a new environment, then you will need to install it manually using the source files from the developers website. Regardless of which route you take, be sure to thoroughly read through your distros documentation or the documentation of the DE you wish to install.

Bear in mind that this is a very simple look at a few desktop environments available. I am merely scratching the surface, but have included the most popular ones. This article is designed for the beginner who is unsure of what’s available, so if you see what you like, read up on how to install it and give it a try!

KDE has been around for quite a while and I believe it was the first environment I used back in 2000 using Caldera Linux. KDE is built on top of the Qt toolkit and runs on numerous platforms. It’s much more than just a desktop environment though. There are side projects such as KDevelop and KOffice that help to make it a great desktop for getting your work done out of the box. There are numerous other projects not officially part of the KDE team that specifically create apps for use under it, so you will have a huge selection of apps to choose from.

If you are a Windows user, then KDE is probably the environment that will be most familiar to you. You will have a tray down bottom which features applets and launchers in the same positions as the Windows taskbar does. However, KDE has far more customization than what Windows gives you. Similar to the Windows start menu, there is a K Menu here that displays your recently used files, programs and control panel. In the end, this really is an environment that is welcoming to new Linux users due to it’s ease of use, but has full customization and functionality to please power users. 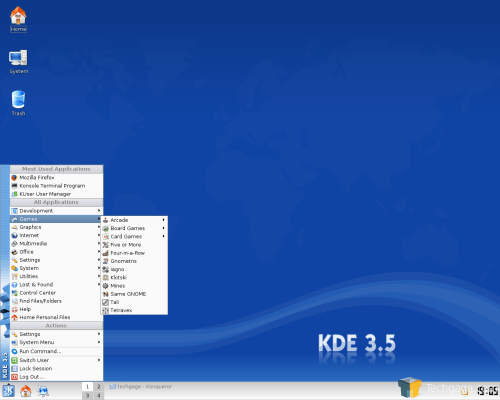 Once KDE is installed and you log in for the first time, you will be greeted with a prompt that will ask you how you wish to use it. If you are coming from Windows or Mac OS, you can select those options to help the functionality match what you are used to. If you have no preference, then you can stick with the default mode. The functionality differences mainly depend on how you minimize applications… that sort of thing.

Your desktop will look like this after you log in. Blue KDE background and gray-ish gradient K bar. 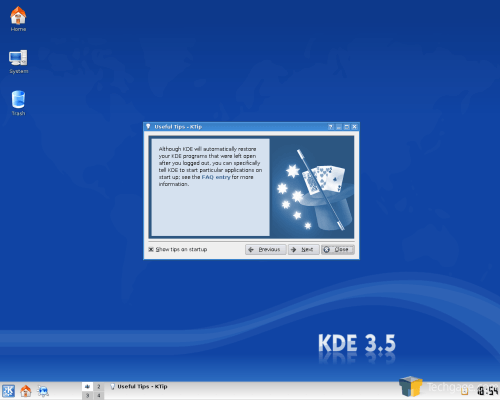 If you install the full blown KDE installation, you will have a ton of functionality immediately available. As I mentioned, this environment includes many extra applications, just like Windows does. This includes Kontact (Mail Client), Konquerer (Web Browser), Konsole (Customizable terminal), KSnapshot (Screenshot taker), Kopete (Multi-client IM), KDE Control Center and much more. 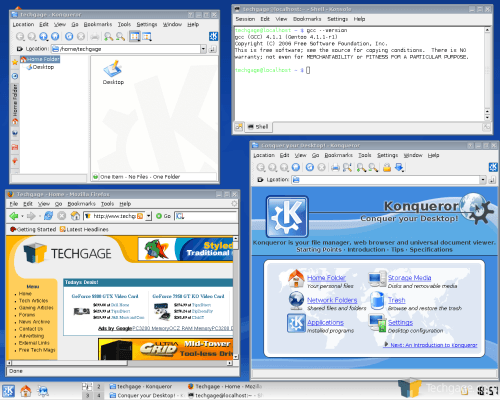 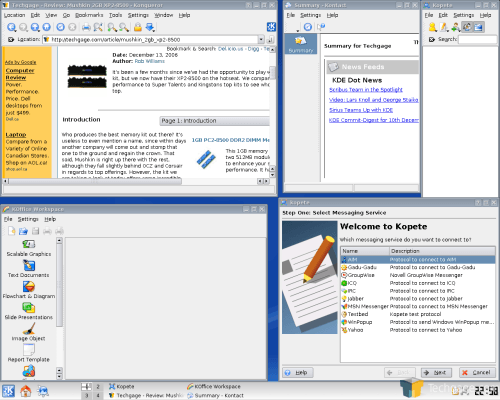 KDE control center is the one stop shop for all things KDE. Here, you can control anything the environment offers. From an eyecandy perspective, you can easily change the theme, color scheme, icon set, fonts and anything else to better suit you. Beyond that though, you can also change file associations, network settings, samba, peripherals and even the KDM login manager. 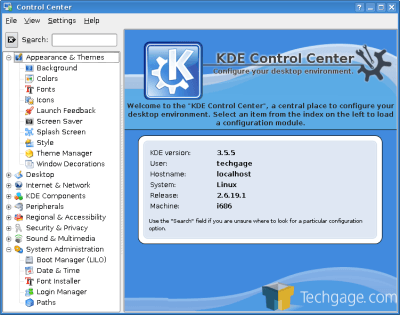 It’s not a secret that KDE is a superb environment, but it’s also one of the most accessible. It’s such a complete environment, that its really no surprise that it’s used by default on many distros. Besides, where else can you get Konqi the green dragon? From a customization perspective, I’ve included a screenshot of my personal KDE desktop. The default desktop included with KDE is not exactly the best looking out there, but really anything is possible. I spent 5 minutes customizing mine. With a little TLC, you can really create a desktop that perfectly suits you. 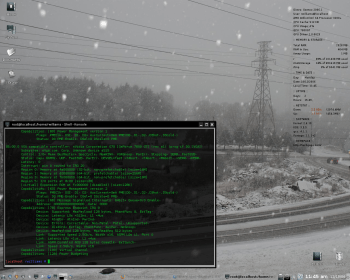 Note: System Info bar in above screenshot is possible with SuperKaramba and theme (will need to edit).

So who should use KDE? Anyone… it’s a desktop that’s designed for everyone and their dog. It’s such a configurable environment, that you can change the look entirely just with the included Control Center tools. As you can imagine, KDE has a huge user base, which results in tons of support. If you are looking for new KDE specific apps to use, you can hit up sites like KDE-Apps.org and peruse a selection there.

KDE-Look.org is another related site that focuses on customizing everything on your machine, including the theme, color scheme, desktop wallpapers, icons, login screen and even the splash screen. There is a world of possibility here on the customization front.

But, there are other popular desktops out there, and we are going to move into the second most popular one next.