We covered a handful of major renderers on the previous page, but we’re not done yet. On this page, we’re going to take a look at a few more, including some industry mainstays and newbies. That includes Corona Renderer, which we recently upgraded to version 6.

To give you an opportunity to test your own hardware against ours, we’re also including the popular synthetic tests POV-Ray and LuxMark, as well as Cinebench, which represents current R23 performance. For good measure, we’ll also be testing the real Cinema 4D R23 with multiple scenes. 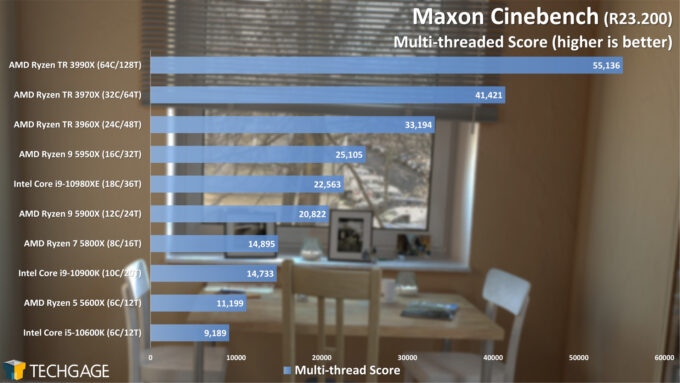 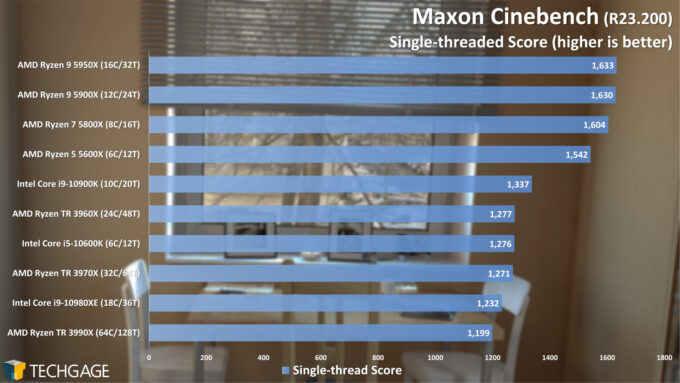 Cinebench is one of the best standalone benchmarks that anyone could test with, as it directly represents real Cinema 4D workloads. While many of the renderers in our lineup for this article can use either the CPU or GPU, C4D’s default render engine still relies entirely on the CPU. If you want GPU compatibility, you will need to opt for another renderer, such as Arnold, Redshift, or V-Ray.

As you’d expect, the more cores you feed C4D, the quicker your render will complete. Let’s see how these results stack up with our real-world tests: 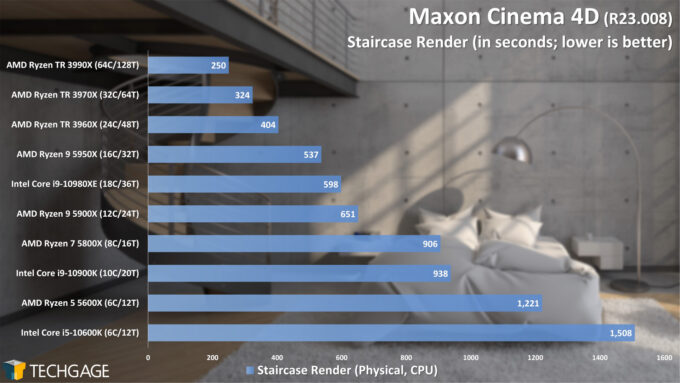 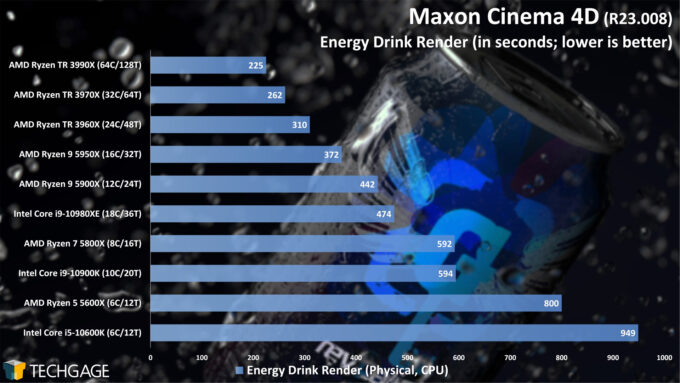 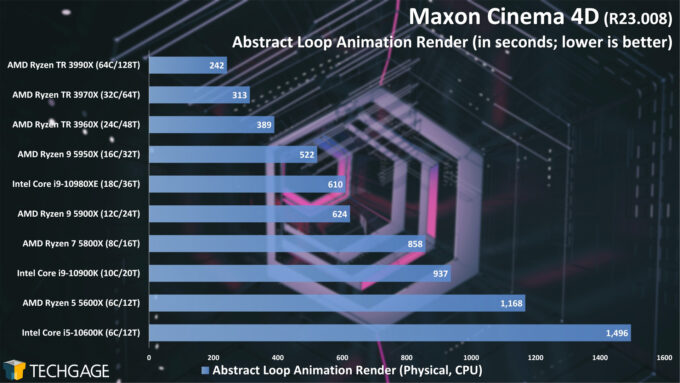 C4D’s render engine is one of the most consistent we’ve ever seen. All three of our real-world projects scale almost the same, with the top 64-core chip not exactly pulling as far ahead as we’d like to see. Still, the bigger your CPU, the less time you’ll have to spend waiting on your renders. 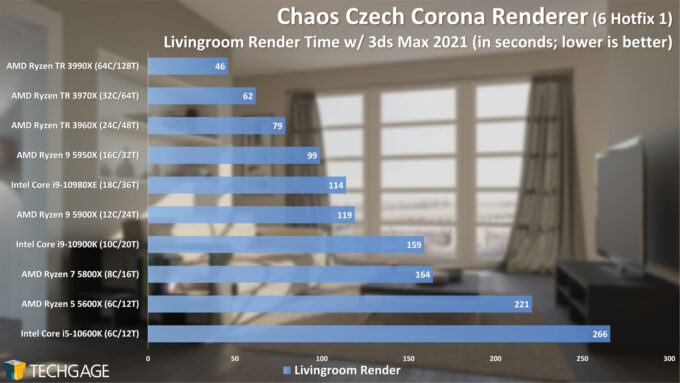 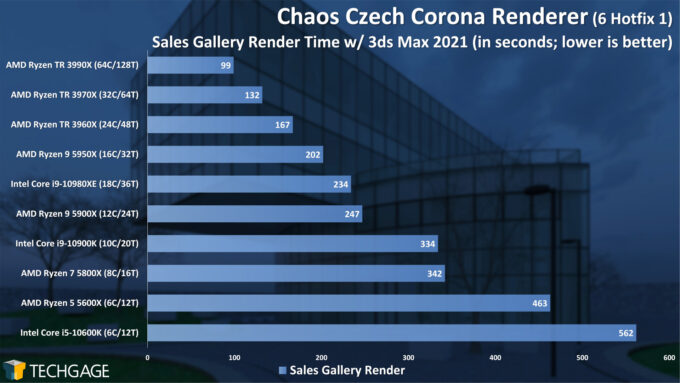 Corona is another renderer that focuses squarely on the CPU, and over the past few years, the developers seem to have ramped up their efforts to pile on more useful features. As with C4D above, the bigger your CPU, the faster Corona is going to render a scene.

It’s interesting to see, however, that AMD appears to be inherently faster in a number of these renderers, including Corona and Cinema 4D. AMD’s six-core beats out Intel’s 10th-gen six-core by a fairly large margin – one we really wouldn’t expect, given the higher peak clock speeds of the Intel chip. 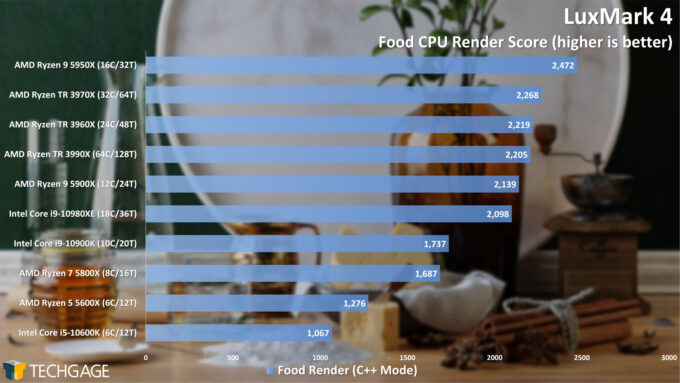 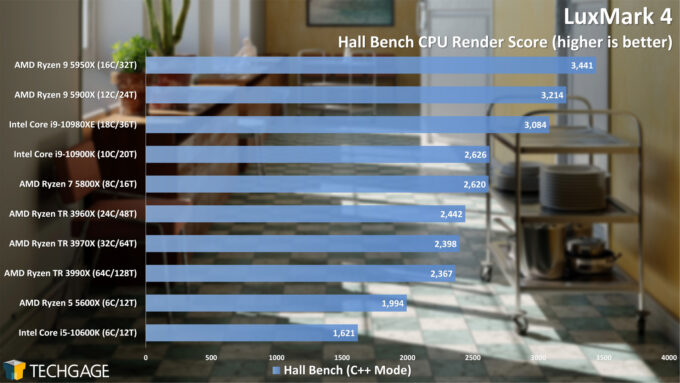 As Maxon’s Cinebench benchmark reflects performance of its Cinema 4D application, LuxMark represents performance seen in LuxCoreRender. As this renderer is built around Intel Embree, we expected Intel’s chips to perform stronger than what we’re seeing here. The six-core AMD still manages to beat out Intel’s own six-core, despite Intel’s clock advantage.

Speaking of clocks, the various configurations of these CPUs has led to interesting scaling here. Overall, the Ryzen Threadripper chips don’t fare well at all, falling behind more modest Zen parts most often. Meanwhile, AMD’s 16-core 5950X, which has much faster clocks than the Threadripper chips, soars to the top of the chart.

In yet another example of how different scenes can scale differently, the Hall Bench scene proved to be much more favorable to Intel than the Food one. Overall, though, AMD carves itself a commanding lead. 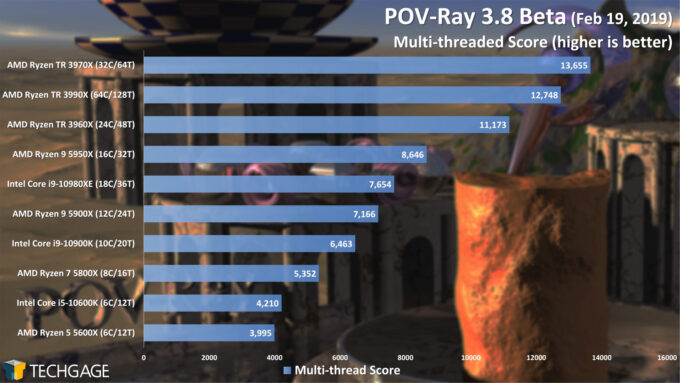 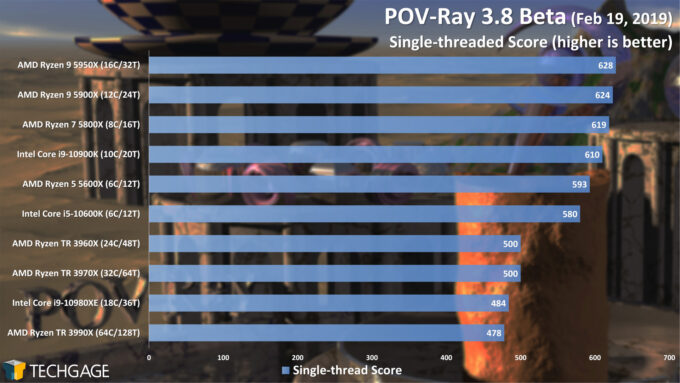 To wrap things up, we’re using a crowd favorite: POV-Ray. There are few renderers we’ve tested quite as long as we have POV-Ray, so we have a bit of a soft spot for it. As with LuxMark, the scaling is a bit interesting here, with the 64-core Threadripper chip once again falling behind the 32-core – a bit unusual for a rendering test. The single-thread test can really highlight the differences between the many-core modest-clocked and the lower-core high-clocked chips.