ASUS Eee Keyboard – A PC You Literally Type On

Although we mentioned ASUS’ Eee Keyboard in an article last week, I didn’t come to realize just how cool this product was until I found myself with some hands-on experience, and after that experience, I have no hesitation in awarding it one of our “Best of” awards.

For those unaware, ASUS is pushing their Eee brand like humankind pushes the act of breathing. No joke. Taking a look at their (large) booth at CES this year, I actually had a difficult time finding their enthusiast products. On display, I found about five motherboards, four audio cards (all were HDAV’s) and four graphics cards. About 90% of the entire booth was dedicated to Eee PCs, Eee accessories and their notebook line-up. It’s easy to understand the reasoning behind this, though. 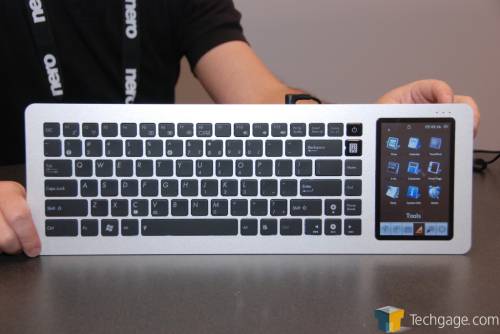 Although seeing more enthusiast products would have been nice, some of the launches ASUS made here were still well-worth the attention, and in our opinion, the Eee Keyboard tops them all. Essentially, it’s a computer built into a keyboard, but there’s so much more to it than that. It’s designed to be an all-in-one PC, minus the display, and is currently based on Intel’s Atom platform, using the N270 processor at the base. It also includes 1GB of memory, although anything can change before the projected launch of late Q3 2009.

The keyboard itself is full-sized, and is no different to use than a standard offering. The difference here is a 5″ LCD screen on the right-side, which when in regular use, will display a handsome GUI with lots of functionality. This functionality could range from a simple notepad or calculator to setting an alarm or editing your calendar. This screen will also allow full use of the Windows XP installation, although it’s a rather small screen to use for that purpose.

Since the keyboard is to include Wireless HDMI, you’ll be able to use this PC on your monitor or TV without being connected to it. If you don’t care to use WiFi, you will be able to plug in a single LAN port, and for other connectivity, there two USB ports will also be available. Overall, the Eee Keyboard might still be early in development, but what ASUS had here to show off was impressive. Things should only improve between now and launch.

SDXC – Is that a 2TB SD Card In Your Pocket?

How is it that something as simple as a Secure Digital card gets awarded our “Best of CES 2009”? Simple. Let’s take a look at how things are right now in the market. Almost any current digital camera (aside from the odd models that use proprietary formats) uses Secure Digital right now, and where cell phones and other devices are concerned, we usually find a “Mini SD” format. So for the most part, many people are familiar with SD, not just tech-heads. 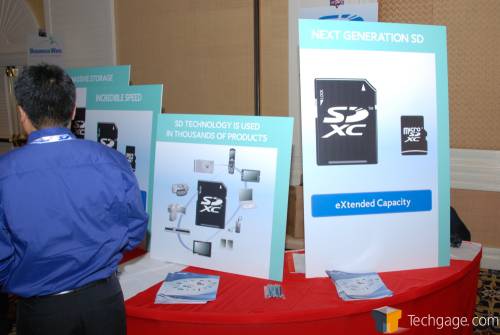 So picture if you will, an SD card capable of holding up to 2TB (that’s 2,000GB) worth of data. That’s a massive shift, given the largest SD cards on the market right now hold 32GB (which is still a lot). Although SDXC won’t start out quite so high, it will begin things out with a 64GB model in Q1, which will be capable of a Read speed of 104MB/s, far surpassing what SDHC is currently capable of.

Not only will the densities grow larger over time, but so will the speeds. At the top end, the SD Association foresees speeds of 300MB/s Read being capable, which, for those unaware, would actually far surpass current hard drive speeds. Although no mention of Write speed was disclosed, we can only hope that it will be equally impressive. The good thing is though, it might take a while before we have any devices capable of even tapping out the maximum speeds of the launch product. The future for mobile storage is looking good… very good.