As already mentioned, the 6800 GT I’m reviewing is the PCI-Express version, equipped with 256MB GDDR3 memory. It’s base Core Clock is 370MHz, which is 20MHz above the normal 6800GT speed, hence this being the “Overclocked” version. The Memory Clock stays the same, at 1000MHz.

The card features 16 Pixel Pipelines, and is capable of offering 555 million vertices/sec and has 32GB/second memory bandwidth. The card comes in two versions, and the only difference is that one comes with Dual DVI, and the other, which is the one we reviewed, has one DVI and one VGA. Both cards also include S-Video support though. 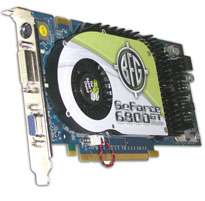 For more information on the 6800 GT/Ultra in general, such as the CineFX 3.0, Shader Model 3.0 and more, you can check out the Nvidia site for all the information. 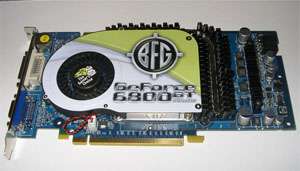 BFG followed the reference design closely. As you can see though, the DVI/VGA version of the card uses Blue PCB, while the dual DVI version uses standard Green. You can also see that the card uses a great looking single slot cooler. Is this really a good thing though? I’ll talk about this later.

In this review, we will be using the standard synthetic benchmarks, as well as many top games to see how much power the card has. Even though the card is pre-overclocked, a 20MHz increase to the Core can hardly be considered worthy, so all benchmarks have been done with Stock and Overclocked speeds. System specs are as follows:

I should mention that no resolutions will be tested above 1280*1024 as my monitor doesn’t support anything higher. If you need benchmarks done on higher resolutions, you will not find any here! In the future, I hope to incorporate higher resolutions into reviews, up to now, I just haven’t had the need.