To see just how our Xeon’s stack up, we are going to pit them against our QX9775s through a few different real-world and synthetic tests. Note that all QX9775-related results here were taken from our preview earlier this month. I benchmarked the E5410s using identical hardware, minus the PSU and chassis.

Thanks to having a PSU that features two +12V 8-Pin motherboard connectors, I was able to spend some time overclocking these processors. I admit, overclocking on the D5400XS was not my idea of fun last weekend – it was a tedious task, but had to get done! In the end, I found 2.8GHz to be the absolute top-end stable overclock.

From what I can tell, however, the 2.8GHz frequency hit was not the hard-limit. Instead, the reason I couldn’t go higher was because of the motherboard not allowing a stable FSB above 400. At 420FSB, I found it impossible to stabilize the CPU, so I believe 400FSB to be the max stable setting on this board. While 2.80GHz was stable at near-stock voltages, not a single voltage increase would help us reach 2.94GHz, much less any further.

That said, 2.8GHz is not a shabby overclock by any means. I should stress that this was stable, not partially stable. On top of that, it was done with stock CPU voltages and ever-so-slightly raised secondary voltages (1.30v CPU, 1.3v FSB, 1.350v MCH). Thanks to that stable overclock, we are reasonably close to the stock speed of the QX9775s – just 400MHz shy.

For our quick benchmarking, I ran the tests on both the stock speeds for the E5410s and also on the overclocked setting to better show the differences when overclocking is brought into the picture, and to also compare overclocked settings to stock settings on the QX9775s. First up is our PCMark Vantage results: 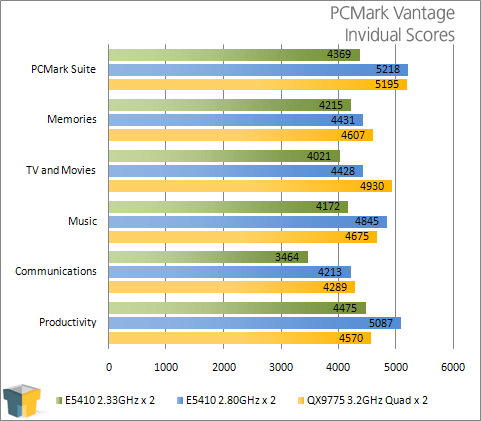 Interestingly, the QX9775 didn’t flex its muscles too hard in this test. This is no surprise, as PCMark was not designed for systems with 8 cores, but it does show us that for multi-tasking, you’d be hard-pressed to see a difference between the overclocked E5410s and stock QX9775s.

For the methodology of the remaining tests, please refer to our Skulltrail preview article as we explain the processes for each benchmark in full. I am omitting explanations here in order to keep the article a reasonable size.

There’s little denying that the QX9775 is the superior here, but our E5410 at its overclocked setting didn’t go down without much of a fight. Some of the results are very close, and very nice to see from CPUs that retail for such an affordable price.

You might wonder why we didn’t pit our Xeon’s against any games, and the reason is simple. As we found out in our preview article, having more than two cores didn’t make a difference anywhere. As long as you have a dual-core, chances are every game on the market will play just fine. Most of today’s games are hardcore GPU-bound, so having an eight-core system is not going to improve things.

Where things are improved is with multi-tasking. With eight cores and lots of memory, you could play your game and have another process run in the background without much worry. That’s one of the many benefits of an eight-core rig.

With our benchmarking completed, let’s wrap up with the final thoughts.