by Rob Williams on February 4, 2008 in Processors

Consisting of two Extreme Quad-Core processors, Intel is looking to redefine what we know as “high-end”. Skulltrail is touted as being the “ultimate” enthusiast platform, offering SLI and Crossfire support, huge overclocking abilities and enough sheer power to make the competition weep.

Note: Be sure not to miss our “Building an Affordable Skulltrail” article!

“High-end”. What does that phrase mean to you? To many, the term represents products that are the top of its class, something that bleeds excellence. It doesn’t matter what part of life a product-type represents… there’s always a “high-end” offering somewhere.

What? Did I just call a 3.0GHz Quad-Core processor a generic product? Of course I exaggerate, but it’s easy to be unreasonable once Skulltrail pollutes the mind.

Yes, where Skulltrail is concerned, great possibilities arise. Up until now, such a platform has been unavailable for the regular enthusiast, whether it be an overclocking or gaming enthsusiast, but Skulltrail promises to feed the insatiable need of those who thrive on having more power. Does it deliver on its promises? It does, as long as you have the means to feed it.

Let’s touch up on what Skulltrail is, exactly. The name likely comes as no surprise to anyone who’ve been visiting the site for a while. During IDF in September, Intel delved a lot more into what Skulltrail was, how it worked, and what we should expect. We covered what we learned in greater detail inside of these two articles.

First and foremost, the “Skulltrail” name doesn’t represent the platform as a whole, per se. Rather, the moniker is a codename for the D5400XS enthusiast motherboard, the “XS” meaning “Extreme Series”. That board is designed to co-exist with two Extreme Quad-Core processors, essentially creating the “platform”. 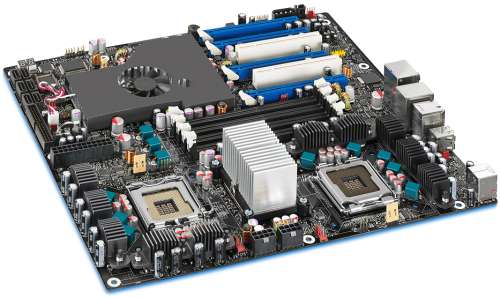 Once launched, the Skulltrail “platform” will be marketed with the D5400XS motherboard and include dual QX9775 LGA771 processors, which settle in at 3.20GHz, similar to the QX9770 LGA775 chip that we evaluated back in November. Although any LGA771 processors will function in the board (Xeon E5410, E5420, et cetera), the QX9775 is the first-ever LGA771 Extreme product.

One of the big draws to the system is the fact that it supports NVIDIA SLI and AMD Crossfire, but that’s not without certain drawbacks. The D5400XS has four GPU slots, for example, but that doesn’t open up Quad-GPU capabilities by itself (in that they work together). Instead, that’s for the GPU manufacturer to handle, via their drivers.

The fact that NVIDIA SLI is available here is something interesting in itself, since it’s the first time SLI has seen face on a non-NVIDIA-chipset-based motherboard. For this to be possible, Intel uses NVIDIA’s nForce 100 SLI MCP chipsets, which opens up the ability for basic SLI. The downside though, is that 3-Way SLI and Quad-SLI are not immediately possible with that given chipset, so whether or not having anything beyond SLI with two GPUs remains to be seen.

AMD’s Crossfire is a little different, though, because it doesn’t specifically require a special chipset to operate. Because of this, it’s much easier for AMD to release special drivers to enable Quad-Crossfire, which will no doubt happen far before the time we see Quad-SLI supported here.

What’s the point of so much power?

As soon as Intel released information regarding the new platform, many people exclaimed just that. It’s hard to disagree… as many are still figuring out ways to put their single Quad-Cores to good use. So really then, what’s the point of having a machine this powerful?

The fact that the D5400XS motherboard includes support for SLI leads to the theory that it’s a board for extreme gaming, which it is, but that’s far from being Intel’s only target audience. Let’s face it… games have hardly even begun to take proper use of our Dual-Cores, so seeing a title exploit all eight cores and benefit from it is not something that will happen overnight. Game developers are catching up to that, however.

Ultimately, Skulltrail is designed to be a workstation solution that offers so much power, the end-user won’t need to worry about maxing out the capabilities – unless they want to, of course. 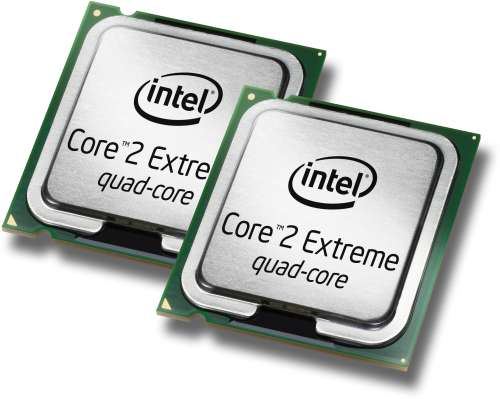 When Dual-Core processors first brokethrough, the common point people made was that more than one process could be run without lagging the rest of the system. “Finally! I can encode a video AND play a game at the same time!” As hard as it is to believe, that was only three years ago. How in the world did we survive prior to that?

Once the multi-core scheme of things grew larger, developers all over began to make sure that their applications supported multi-threading. After all, if an application handles its job on more than one core, it gets done faster – and if the power is there, it might as well be used.

Quad-Cores then came into the picture, in late 2006, and the same arguement was brought up again. Since most of our applications, including video encoders, began to use more than one core, our Dual-Cores began to become too overworked, essentially bringing us back to the original problem we ran into. It’s no secret… if you are a big multi-tasker, then Quad-Cores are a blessing.

So, how about effectively doubling the power of a Quad-Core machine, giving the end-user so much room to breath that it becomes a challenge to take full advantage of all the power?