by Rob Williams on November 19, 2007 in Processors

We took a look at Intel’s first 45nm desktop offering a few weeks ago and already have a preview of it’s successor. The QX9770 is equipped with a 3.2GHz frequency and is the first Intel CPU to support a 1600MHz Front-Side-Bus. Read on to see how it compares to the rest of our fleet.

If it seems like we just delivered our first 45nm processor review a few weeks ago, don’t worry, it was. The processor in that review brought a lot to the table, but we won’t touch on it all here since we did there. Please check back to that review and also our September IDF coverage if you want to know all about what’s new and upcoming.

Intel officially released their 45nm processor line-up last Monday, and most e-tailers have had a hard time keeping it in stock. I’ve been keeping an eye on a few of them for the past week and it seems as soon as an e-tailer has some in stock, it’s sold out. There are a few e-tailers that have hiked their prices due to demand, although a kind few have kept the price low (~$1,150 at the time of writing), while actually having it in stock.

Before we jump into a look at the new CPU, we should reiterate what makes Intel’s 45nm offerings special. Most important is the fact that the new processors are more efficient overall in every respect – power usage and temperatures are improved all around. Much of this added efficiency have the new High-K transistors to thank, which we explained in some depth last month.

Efficiency aside, there are new SSE4 instructions which can improve video encoding dramatically, as we saw in our QX9650 review and will see again today. Although SSE4 is still catching on, within the first few months of 2008, we should see many more consumer encoders utilizing the new instructions.

Another area where the new processors are improved is with the L2 cache, which has been increased 50% all around, resulting in 12MB on Quad-Core processors and 6MB on Dual-Core offerings, which will be released later.

The focus of today’s preview is an up and comer. The QX9770 offers 3.2GHz speeds with a 1600FSB, a first of it’s kind. This article is considered a preview for three reasons. First is the fact that our motherboard does not officially support 1600FSB processors, despite having a beta BIOS that is designed to add the support. Second is that the QX9770 is designed to launch alongside Intel’s X48 chipset, which we were unable to attain prior to this preview.

Last is the fact that we were unable attain DDR3-1600 RAM prior to testing. To understand how that RAM would help though, we have to understand what FSB does. As a primer, the FSB is what helps the CPU talk to the Northbridge, and when the RAM runs at equal speed to the FSB, it can talk just as fast to the Northbridge. So, by using modules at slower frequencies, we potentially bottleneck some performance in a few of our tests. We will be investigating into this more later. DDR3 has not caught on yet due to it’s price, so the speeds we are running today will be somewhat representative of modules you might have in your own PC

Due to time constraints and the fact that this is more of a preview, we will cut our introductions somewhat short and dive right into testing. First though, we will take a look at where the QX9770 lands into our lineup.

As we’ve mentioned, the QX9650 has already been released, while the QX9770 is next up. However, that is not happening until at least “Early 2008” which will more than likely be sometime in the later half of January or early February. Prices have been leaked in the past as $1,399 in quantities of 1,000. Whether or not that will prove true upon release, we will have to see.

One thing that makes the QX9770 special is that it’s brother, the QX9775, is what will be used in Skulltrail, the high-end enthusiasts platform that we will learn more about in the months to come. The QX9775 has identical specs, except it requires an LGA771 socket, that of a server platform. Why the price increases between the two, or the TDP for that matter, I’m unsure.

We mentioned that the QX9770 was designed for the X48, but where is it? This chipset will be the successor to X38, which was launched last month. It will not improve a great deal on X38, but it’s marketed strictly at enthusiasts. There will be no X48 chipset-based motherboard for the mainstream consumer.

In terms of specs, X48 will be native 1600FSB, include support for unlocked bus ratios and Intel’s Extreme Tuning Utility. While X38 was lenient of the fact that DDR2 still existed, X48 will be DDR3-exclusive. There are two reasons for this. The first is that Intel is looking forward, and would love nothing more than for everyone to pick up on DDR3 so that they have one less thing to worry about. Second, in order to run your PC with a ratio of 1:1 between the processor and RAM, DDR3 is required. DDR3-1600 is also the only official profile that Intel currently offers on XMP modules. 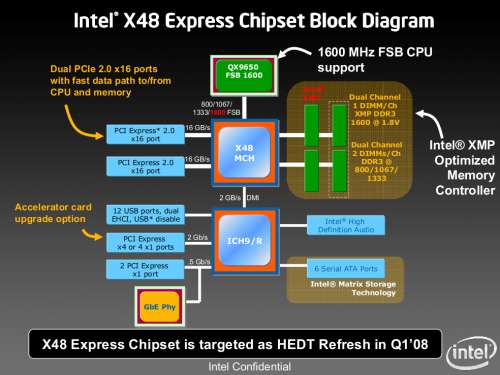 Like X38, X48 will once again offer dual 16x PCI-E slots, so ATI Crossfire is definitely in the “cards”. While Intel’s Skulltrail chipset will be based off of X48. it will offer support for NVIDIA SLI as well, thanks to added support on their official motherboard.

Without further ado, we will jump right into our benchmarking methodology and our performance reports, to see what the QX9770 is made of. The benefits of a huge FSB can be argued, and I’m right there with everyone, so we will be evaluating the benefits more once we have an X48 motherboard in our labs.