The past two years have been exciting for fans of the processor world, with Intel doing their job well to keep the momentum going. Since Conroe’s launch last July, Intel has successfully kept their foot atop AMD by offering products that not only outperform theirs by a significant margin, but are also offered at such low prices that only hardcore AMD fans would ponder purchasing a non-C2D product.

Everyone had hoped that AMD’s Barcelona architecture would bring them back to the competitive table, but not unlike the current-gen ATI vs. NVIDIA battle, there wasn’t a mark to be left. While AMD undoubtedly needs to release a product that prove to people that they haven’t completely lost their grip on things, consumers have been benefiting either way.

Today, it would be a challenge to purchase a processor that didn’t perform exceptionally… at any price range. Quad-Cores can be had for under $300 and both Intel and AMD have superb dual-core processors that retail for under $200. Without question, it is a great time to build a new machine or for being in the mood to upgrade.

True to the tick tock model, Intel today is unveiling their first 45nm processor. For those unaware, the tick tock model is Intel’s term for describing their product cycle, with tick referring to the initial launch of a new microarchitecture and tock denoting it’s successor. In today’s case, tick is Penryn, while tock is Nehalem, which we’ve taken a look at earlier this year and also learned more about at last months IDF.

Also at last monthâ€™s IDF, we were told the official launch date for Penryn: November 12. This date still holds true, with the first and only model being offered on that day being the QX9650. Intel hasn’t stated pricing yet, but previous leaks have stated the usual $999 in shipments of 1,000. Once the QX9650 hits your favorite retailer or e-tailer, prices you pay will be greater than this, around $1,300 at a guess. 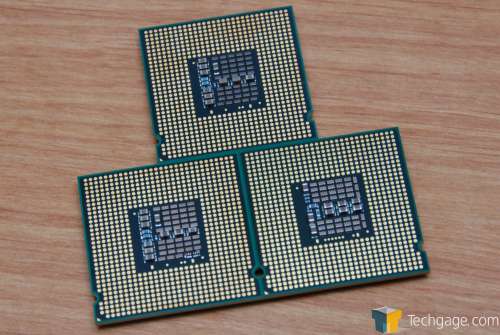 Before we delve into different processor models, we will first see what Intel’s 45nm architecture is bringing to the table. Penryn and it’s derivatives are much more than a simple speed boost, and we will tackle all of that here today.

The overall theme of 45nm is efficiency. Thanks to the smaller process, benefits should include better thermal properties, better power efficiency, faster performance at equal frequencies and for the enthusiasts, potentially better overclocking. Add to the fact that 45nm has gone lead-free, the new transistors seem like a win / win.

But just how small is 45nm? Go grab a metre stick and divide it into one billion equal sections. One of those pieces is a nanometre. If that feels like too much work, just consider the fact that you could fit 2,000 45nm transistors across the span of a single human hair. Or for an even more mind-boggling comparison… 30 million on the head of a pin. Dual-Core Penryn chips will include 410 million of these transistors, while Yorkfield will be double this number.

There’s more to these transistors than just being small though. Intel has been talking about High-k Metal Gate transistors all year, and according to co-founder Gordon Moore, this new implementation “marks the biggest change in transistor technology since the introduction of poly-silicon gate MOS transistors in the late 1960s.” 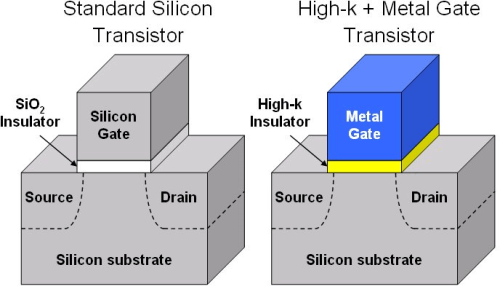 The above diagram shows the differences between the previous generation of transistors and the new High-k offering. Because transistors are constantly shrinking, the risk for current leakage will increase, hence the need for a new insulator. Because a high-k dielectric insulator is more efficient than silicon dioxide in smaller transistors, Intel (and others) felt it absolutely necessary to include them with 45nm. Interestingly however, information has recently leaked that AMD has produced initial 45nm processors using current materials. How efficient they will prove to be will likely remain unknown for some time to come… if they choose to stick along that route with the final product.

Metal gates in the MOS stack have been used in the past, but were since removed due to inefficiencies. However, with 45nm, its become necessary to bring them in again to replace the common poly-silicon in order to increase efficiency with the high-k insulator. Together, they should prove far more efficient than previous transistors with lower current leakage and increased reliability.