Firaxis impressed us last summer when it released the excellent Gods & Kings expansion pack for Civilization V, so leading up to the launch of Brave New World, the game’s second expansion, expectations were sky-high. Did the company deliver yet again? Let’s find out, and get cultured in the process.

As mentioned before, the social policy mechanic has been tweaked quite heavily in Brave New World, and if you’re a regular Civ V player, you’ll notice the differences right away.

Once a Factory is built in three of your cities, or you reach the Modern Era, you’ll be able to adopt an ideology: Autocracy (Fascism), Freedom (Democracy) or Order (Socialism). Whichever ideology is best for you depends mostly on your victory condition, and / or whether or not you want to become chummy with other civilizations that have chosen a certain one (you’ll get along easier with a Freedom civilization if you choose Freedom for yourself). 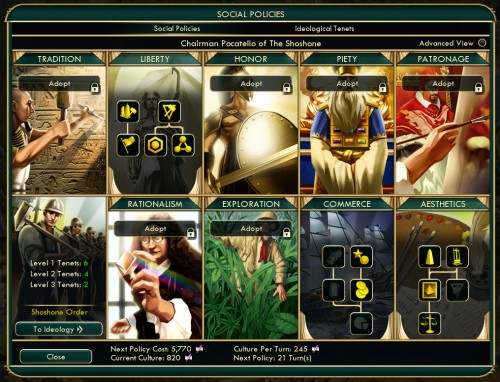 As with virtually everything else in the game, choosing a certain ideology may not go down too well with your people, and for that reason, you have the option to switch it later on. However, that comes with some serious penalties, such as the total loss of culture that you’ve spend into the tenets. And speaking of tenets: 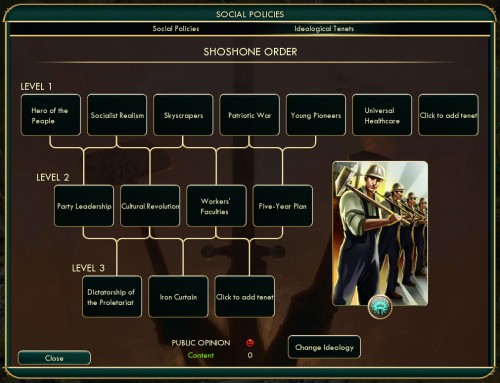 Once enough Culture is earned, you have the option of spending it on a tenet instead of a regular Social Policy. Like Social Policies and other perks strewn throughout the game, effects gained here vary wildly, from increased Great Person generation to improved Tourism from cities with a Broadcast Tower to cheaper military units and so forth.

Also new and very important in Brave New World are international trade routes, which allow you to easier spread your religion and culture while gaining science and gold. If you ever find yourself really struggling on the gold front, you might need to build more Caravans to work as many routes as you’re allowed, because it can definitely help keep you afloat. 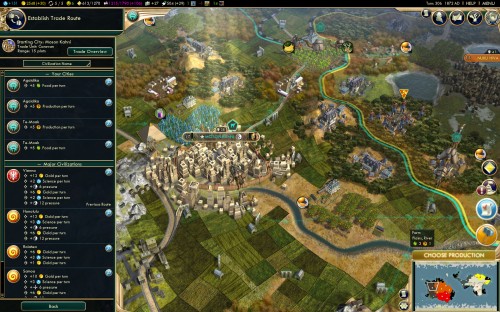 In the shot above, you can see my trade route options for my primary city, along with my max allowed seen at the top of the screen (5/5). As the game progresses, the gold and science you earn from your routes will grow, and as you’d expect, a war with another civ will automatically cancel out every single one of your routes with them. That can put you from the positive to the negative very quickly.

If you don’t need gold or science, but might need some help with your own cities’ populations, you can create internal routes that can increase food or production. This could potentially be very useful with brand-new cities since the more food a city has access to, the faster it will grow and the quicker it will become more efficient.

At some point, you’ll be able to build a Caravansary to increase the range for your land-based routes, and also a Cargo Ship for routes spanning over the ocean.

In addition to everything mentioned in the review so far, a couple of new units are worth looking out for (Bazooka, which is fun, and XCOM Squad – yes, based off of the Firaxis’ other series), as well as new world and natural wonders. While I didn’t touch them, this expansion also adds two scenarios, “American Civil War” and “Scramble for Africa”.

When I reviewed Gods & Kings at its release, I had no idea that I was going to end up loving it a lot, and that I’d consider it a major improvement to an already great game. With Brave New World, Firaxis has done it again. The added mechanics are fun, as is the strategy.

I’ve yet to win a match with Brave New World (granted, I’ve tried just 2x Standard / Small matches), but I ain’t even mad. I’ve been sticking to a cultural victory since it’s the new hotness, and even though I explained a lot about it earlier in this review, I’m still learning more each time I play, hopefully to one day finally secure a win. As with any base Civilization game or expansion pack, it can take many hours before you begin to become really comfortable with the new mechanics, and understand how to exploit them well. I’ve put 20 hours into Brave New World and I still feel like I have a lot to figure out. 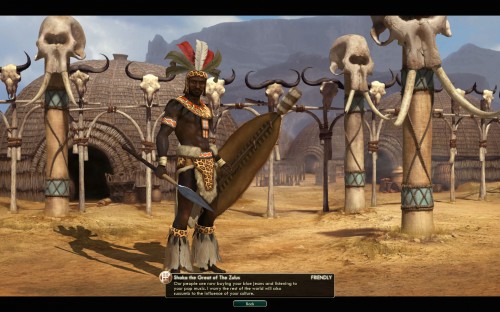 For those who like to conquer a match with each ruler, there’s 9 more of them to play here, with Ethiopia’s Haile Selassie being carried over from Gods & Kings, and as you’d expect, some of the new ones are quite interesting. The Shoshone, for example, give you additional territory when a new city is founded, Brazil gives a 100% bonus to Tourism during a Golden Age, and Indonesia gives you two free (and unique) luxury resources for each city (up to three) that are built on continents other than your original.

Of course, it’s really the new mechanics that are well worth the price of admission here. They add a good complexity to the formula, and really force you to keep on top of things in order to succeed. As someone who always manages to run out of gold, I love the international trade routes mechanic – at least until someone I have five routes with decides to declare war on me (then it gets scary). I’ve always been a fan of accruing mad amounts of Culture as well, so the revamping of Social Policies and the addition of ideologies definitely strikes me as a great improvement.

It probably goes without saying, but if you’re a Civ V fan, Brave New World is worth your cash, and the countless number of hours you’re sure to sink into it.