After a far-too-long absence, religion and espionage has finally returned to Civilization, in the new Gods & Kings expansion. Along with those are many additional civs, units, buildings, wonders, a diplomatic retooling and a worthy upgrade to the city-state system. Read on as we take a look at G&K and see if it’s worth your hard-earned gold.

The introduction of an expansion pack, for any fan of the game in question, is usually a big deal. This is especially true in an age where we see DLC this and DLC that. An expansion pack isn’t just DLC… it’s something more. It’s always been something more, and for that reason, Gods & Kings has had fans of the Civilization series rightfully excited.

As mentioned in our review of Civilization V, we noted that two rather significant mechanics were not carried over from the previous iteration; espionage and religion. This is a big reason why some fans of the series have simply ignored the game. Some equated it to Firaxis’ “dumbing down” of the game – and I am not about to disagree. In that regard, this expansion pack might even be more important to those who belong in that camp, as both espionage and religion finally make their deserved return.

Alongside those mechanics, Gods & Kings introduces 9 new Civilizations, 3 new scenarios, 9 new wonders, 27 new units, 13 new buildings and 6 luxury resources to mine or harvest. All in all, there’s a ton of new content here. 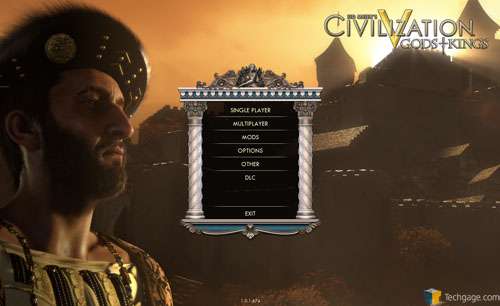 Perhaps the most important addition isn’t even an addition at all. One of the biggest complaints about the game since its release is that its rules were out of whack, and way too many unrealistic scenarios would play out. In Gods & Kings, Firaxis has gone back to the drawing board to make sure that everything seems more natural, especially when it comes to a warred AI opponent. I’ll be honest in saying that I haven’t noticed a great deal of change so far, but my Civ-addict friends certainly have – and it’s been for the better.

Being the type of game that Civilization V is, it’s impossible to cover everything there is to cover in the expansion – and in reality, extreme depth is simply not needed. If you’re a big fan of Civilization V already, I’ll be up-front in saying that purchasing G&K is a no-brainer. If you’re one of those who has held off on the vanilla game due to its “dumbed down” nature, G&K is the right time to give the series another chance – it aligns the gameplay much closer to Civilization IV and its expansion packs. That all said, let’s dive in and see why this is the case.

The addition of the religion mechanic in Gods & Kings is significant, as it becomes an integral part of the gameplay. As such, it can’t even be disabled in the advanced match options, unlike espionage. Much like how you’ve always had to fuss over making sure you’ve had access to the proper resources and make sure your cities have enough to eat, religion can play a big role in the success of your rule.

Similar to how your cities and allied city-states can provide you culture, religion adds “faith” to the mix. You accrue this a couple of different ways, but the primary is by having many followers of whichever religion you found. The more cities in the game that follow your religion, city-states included, the stronger the effect of the bonuses you chose when founding it. 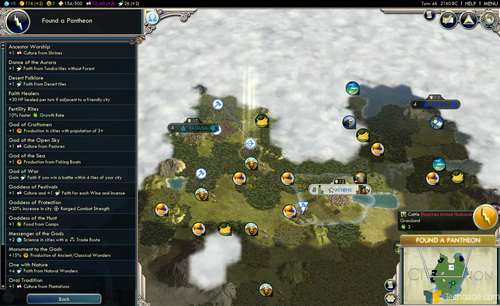 Once the initial level of required faith is met, you’re able to found a Pantheon – in effect, a starter religion. Examples of the bonuses you’re able to choose from can be seen in the shot above. These range from giving your army an offensive or defensive boost to earning additional culture or production from certain tiles. Each player in the game is able to found a Pantheon, as long as no primarily religion has yet been founded by any civ.

Founding a religion is done in the same way; you need a set amount of faith. But it’s important to note that not all civs can found a religion (only six in my match of ten could found one), so if you want one, prepare to make a bee line for it. When a new religion is adopted, you’re able to adopt both a “Founder Belief” and “Follower Belief”. The bonuses under each are different, and so are the goals you must meet in order to profit off them. 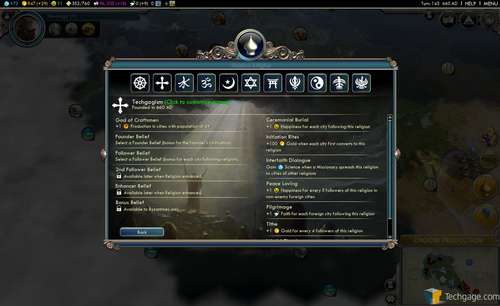 Taking advantage of a Founder Belief requires you to spread your religion with the help of Missionaries or Great Prophets. Follower Beliefs kick in when a city has reached a total of five followers. As time goes on, you’ll be able to adopt a second Follower Belief and also an Enhancer Belief – bonuses that aide in helping you spread your religion. If you’re playing as the Byzantine civ, you’ll be allowed to claim one additional bonus.

As I quickly found out, spreading your religion is a bit of an endeavor. It requires care and strategy in order to succeed, because you’re certainly not the only one out there trying to spread the good word.

Three units exist to help with this job. A Missionary has the ability to teach religion to citizens who don’t yet have a religion and also convert some over to your religion. Inquisitors have the opposite effect of simply removing religion from as many people as possible, paving the way for you to go in and teach these now defaulted people your beliefs. Finally, there are Great Prophets which are an Inquisitor and Missionary combined. Their effect is far more powerful, and is guaranteed to totally wipe out all opposing religions in whichever city you bring it to. 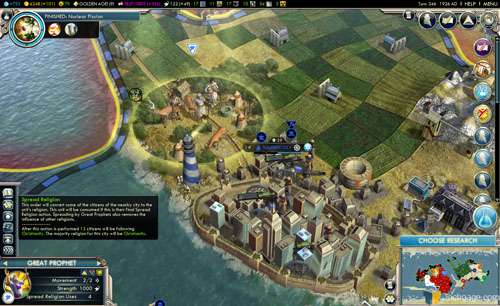 I went into my first couple G&K matches thinking that by default, all of my own cities would be following the religion I chose – but that’s not the case. Just like city-states, each of your own cities is able to be converted. An additional factor that plays into this is “Pressure”. If an opposing religion has a really high pressure number, you’ll want to try to wipe it out as soon as possible to prevent it from spreading to surrounding areas. It’s best to think of pressure as “religious strength”.

An interesting thing about the religion mechanic in G&K is that while it’s robust, and required to exist in a match, you yourself don’t need to pay attention to it. The benefit there would be being able to ignore all faith-related wonders or buildings, and being able to focus on other things such as culture or simply building up your army.