Long before I received the Inferno for testing, I had high hopes. In pictures, the mouse almost looked ideal, from its design to its feature set. It offers a copious number of buttons, and an incredible amount of flexibility with macros. Unfortunately, though, the mouse falls flat in some areas, makes life tedious in others, and has some innate issues that must be addressed.

The first thing that bothered me about the mouse was it’s actual shape, as I didn’t find it all too comfortable. It seems to me that over the past couple of years, gaming mice have increased in width, and also height, and that undoubtedly is going to lead to a different sort of feel. When Logitech focused on the design of the G5 (and similar mice), I loved it, because those felt good, were light, and didn’t strain your hand. For whatever reason, this one does, but only after a couple of hours of use.

As I mentioned before, the right-side of the mouse, towards the front, is pushed out too far for my liking, as my pinky is situated there. Because of how my hand is placed, I end up not with a sore pinky, but a sore thumb, as strange as that sounds. When I hold the mouse, I don’t feel like I’m holding it correctly… my hand isn’t straight, not really that comfortable.

There doesn’t exist the “perfect” mouse for everyone, though, and it might be that some people will use this and love it. In talking to a friend who also has the mouse, he didn’t have the comfort issues I did, so it could be that I’m an oddball in that regard. We should know more soon enough once these mice hit the retail market. Until then, I can’t really call this an “issue”. 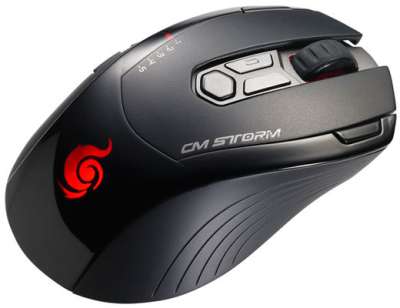 The second problem is the software. It looks great, but handles terribly. Once you understand how to use it, it’s a little bit better, but still unbelievably tedious to use, especially when dealing with the drop-down menus that display 60 some items but only display five with each scroll. Small issues like these aren’t only the fault of Cooler Master, because I’ve never used macro software that was fun, but this is the most tedious I’ve used.

Again, once you understand how things work, the process is not quite as bad, but it still could be made a lot easier. The two primary things I’d fix would be A) The drop-down menus, B) Loading a macro automatically when its profile is selected and C) Allowing the forward and back buttons to be used for macros. It makes no sense to me that they aren’t available, since it would make both setting up macros and using them easier.

Finally, I’ve been talking to my good friend Wes Compton over at LanOC Reviews for the past couple weeks about some issues that the Inferno has with its sensor. Between the two of us, there are issues our units share, and also some unique ones on the side.

First, as the mouse is picked up and set back down, either in a certain way or multiple times over and over, the cursor on the screen will jolt to a rather noticeable degree. For me, I didn’t have any issues while in game, and didn’t notice it, but Wes did, and found it to be fairly frustrating. 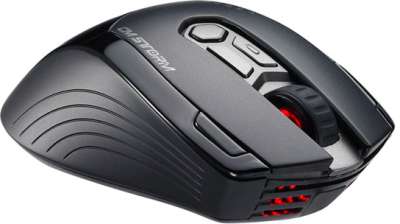 He also found he was unable to push the mouse along a straight surface and have it retain a straight (or almost straight-line) on the monitor. For me, I had no such issue. But one that we did share is that if you rub your finger around the sensor, and place it on the mousepad, the cursor on the screen will remain locked for up to three seconds. Obviously this is a strange test to perform, but that issue doesn’t exist on any other mouse I tested here, and in the end, it helps prove that the sensor here needs tweaking, or to be replaced.

For me, the sensor issues aren’t enough to keep me from using the mouse, because I don’t experience the show-stopping issues during gameplay, or at least haven’t yet. Oddly, though, I did experience small cursor movement at the desktop, when the mouse wasn’t being touched, which I’m sure is related to this issue.

I’m waiting on a response from Cooler Master regarding the sensor issue, and to see if anything is going to be done about it, but for now, I can’t recommend the Inferno to those who it was designed for… professional gamers. The goal of a mouse is to offer extreme precision, not hiccup at the most inopportune time. Though I didn’t experience a severe issue in a game, it seems likely that depending on the gamer and situation, the issue will rear its ugly head on multiple occasions.

Up to this point, I haven’t had a lot of time to use the mouse in gaming (~5 hours across StarCraft II, Call of Duty: Modern Warfare 2 and Lineage 2), but despite the issues, I’m going to continue using it for the weeks to come. I’ll follow-up to this article as I gain more long-term usage experience and relay any new discoveries or thoughts that might develop. I’ll also update the end of this review once Cooler Master responds to these issues.