As we discovered in our review, Cooler Master’s QuickFire Rapid mechanical keyboard is a good one. But, it lacked a couple of things that some gamers (like me) demand. Such things include backlighting, a numpad, and in rarer cases, N-key rollover support. All of these things can be found on the QuickFire Pro, so let’s check it out.

If someone a couple of years ago asked me if anything exciting was happening in the world of gaming keyboards, I’m not sure I’d have much to say. In recent years, there’s just been very little to catch my attention. Anything released either seemed too overdone, or didn’t inspire me to upgrade. Even market leader Logitech has failed to release a new gaming keyboard in the last year-and-a-half. It makes you wonder – did we really reach a point where there’s little to improve?

That’s a hard statement to settle on, because innovation exists, and it’s alive and well. So what’s the next step, then? If you follow keyboard releases at all, you already know the answer: “Mechanical”.

Mechanical keyboards have been around for decades, so with the onslaught of recent releases, it’d be reasonable to assume that we’re in the midst of a big fad – one that companies such as Cooler Master, Corsair, SteelSeries and others, are just trying to cash in on. After all, has there been a market where there have been more fads than gaming peripherals?

In recent months, as I’ve read reviews on mechanical models, including those on this site from Ryan and Jamie, I started to feel the pull. Coincidentally, Cooler Master at around the same time sent us its QuickFire Pro and Trigger keyboards, so I jumped on them and barked at anyone that came near me. I wanted to finally get a chance at using a mechanical model. 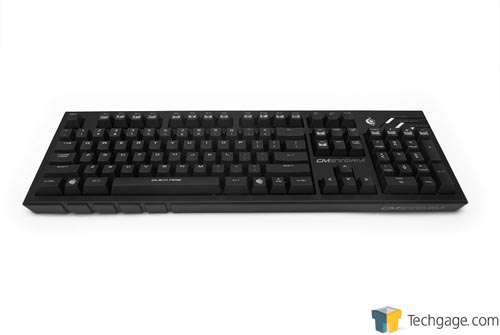 With gaming mice in recent years, we’ve had to worry about which sensor a mouse is shipped with, because there are differences. For mechanical keyboards, what you have to worry about is whether or not they include CHERRY MX switches, and further, which color.

Cooler Master’s mechanical keyboards don’t have their switches set in stone. Rather, the company states that it will vary by region. Our review sample ships with the brown switch (the same goes for the Trigger). If you have a particular preference with how your keyboard feels, then you’ll want to find out which switch your keyboard will ship with before purchasing. Here are the QF Pro model numbers for each switch:

But enough of that. Let’s get to a look at the QuickFire Pro, shall we? 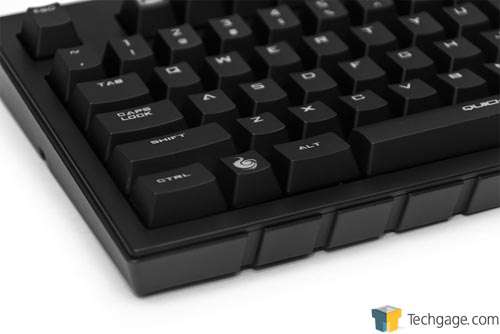 Though the QF Pro is targeted at gamers, it’s also perfectly suited for non-gamers as well. There are no macro keys, and with all of the LEDs turned off, it looks quite professional. Unlike the QuickFire Rapid that Ryan took a look at a few months ago, the Pro includes a numpad – a feature important to a lot of MMO gamers (like me).

As seen in the above image, the CM Storm logo has replaced the Windows flag logo typically seen on most keyboards. The actions of this button are the same as a regular Windows key, however. 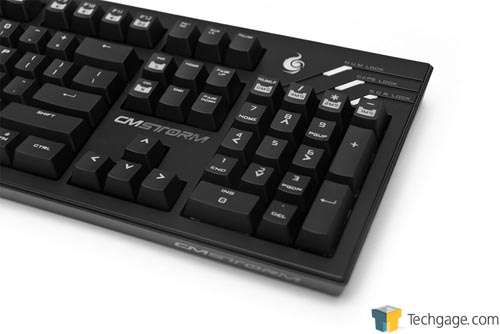 Towards the right side of the keyboard is the “Fn” key (which I managed to cut-off in the photo), and all of the other standard keyboard keys you’d expect. The Fn key acts as a toggle, so in order to use one of the bonus functions of another key, you must push this one and then the other key. This is opposed to any other design I’ve ever seen where you’ve simply had to hold down the Fn key while pushing another.

An example of extra functions can be seen in the photo below. The F1-F4 keys can be used to toggle between the LED modes; F5-F8 controls media; F9-F11 is for volume and finally, F12 can disable the Windows key (so that you won’t get booted out of your game if you accidentally hit it). 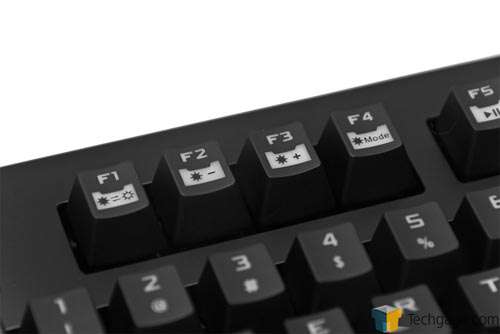 The Fn key can also be used to change non-traditional functionality as well. With the Fn key down, hitting N+Del will enable N-rollover mode, which enables many, many keys to be used at once (there is no official number made by Cooler Master). This mode would be good if you had a really specific reason for it, or if you were playing a multiplayer game where two people had to share the same keyboard. For most people, it’ll be fine to leave the keyboard default.

The other unique function is to adjust the USB polling rate. Those options include 8ms, 4ms, 2ms and 1ms. I’ve yet to figure out a reason why anyone would want to change their polling rate, so once again, default will be fine for most people.

One trait that carries through from one mechanical keyboard to another is their size. The QF Pro is no exception. It’s 1.2″ high and weighs 2.86 lbs. For a keyboard, that’s heavy (some laptops weigh less than that), but it does add to the durability and makes it unlikely that the board will slide around in the heat of battle. 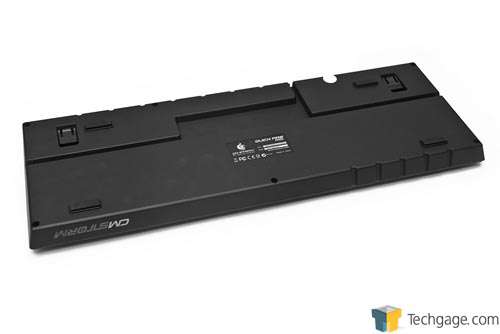 The braided USB cable (not pictured) connects to the QF Pro in an unusual, but smart way. In the above image, the cable plugs in right above the CM Storm information sticker, and then routes out through the back. Because of this routing, tripping over the cord won’t pull it out of the keyboard. I am still undecided on whether I’d trust the keyboard to act as a rope to use in dangerous situations.

Testing, usage and final thoughts up next!