During CoolIT’s CES-presence this month, the Freezone Elite was unveiled. In addition to offering stellar performance comparable to the original, the new MTEC control center is thrown in as well. This self-regulating module proved to do a fantastic job, making the Elite a superb cooling solution.


Time for some results! Before we begin, here are the specs of our testing machine:

I used standard methodology of testing for the Elite. All tests were done 3 times to ensure accuracy. I used Windows XP Professional for the OS and Prime95 was used to fully stress the CPU during testing. The MTEC software does give fairly accurate temperature readings and Core Temp was also used in conjunction to verify temperatures.

The latest version of CPU-Z was used to verify processor frequencies as well. All system drivers were updated to the latest as was Windows. All testing was done with everything installed in case and side panels fully attached. No special added cooling was used and the configuration was kept uniform during all testing. Ambient temperature was also kept nearly constant at 65°F (18°C) during the entire testing process.

My first test was to see just how low I could get the temperatures at idle. I ran the unit at 100% and had the MTEC software set to 0°C. While the fan was quite loud during this test, I was amazed at the results. 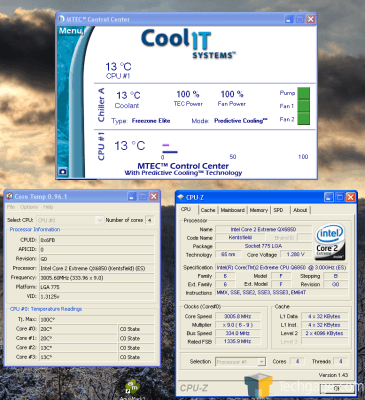 I was quite surprised to see my QX6850 idling at roughly 20°C. That is nearly ambient temperature.

Next I tested full load at stock system speeds. Again I had the MTEC software set to 0°C so that maximum cooling power was being applied. 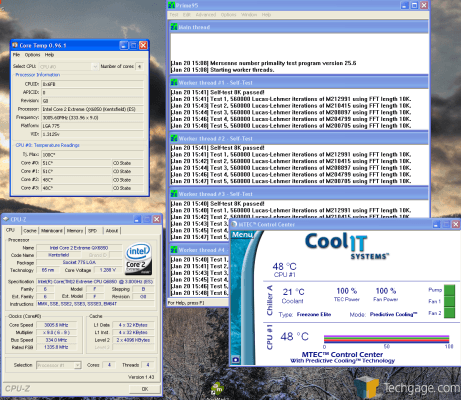 Seeing that the QX6850 runs at 3GHz, there was a fair amount of heat being developed by the CPU. The Elite again proved it was up to the task. Now I tested for just how quietly I could run the unit and maintain a low idle temperature. After trying many different temperatures, I found that setting the MTEC software to keep the coolant at 25°C was the best blend of quiet vs. efficiency. Doing normal tasks on my PC only causes the fan speeds and TEC power levels to ramp up slightly and my PC was very quiet. 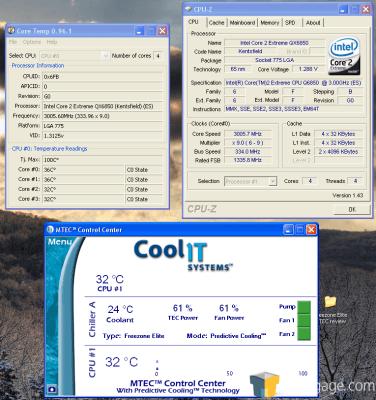 Seeing that it is rated to remove 250W of heat, it was time to crank up the CPU speed to really heat things up. Tests like this are enough to push ANY cooler to its limits and beyond. I do caution anyone else who plans on over clocking their system to be certain that their entire system is up to the task and you have proper ventilation and safeguards in place so that you do not damage your components. All computers handle overclocking differently and you must be certain you are comfortable with the risks involved.

For the overclocking test, I raised the multiplier on the CPU to 11x which resulted in a frequency of 3673.6MHz. At this setting, the CPU is putting out a tremendous heat load. This was really going to push this cooler. 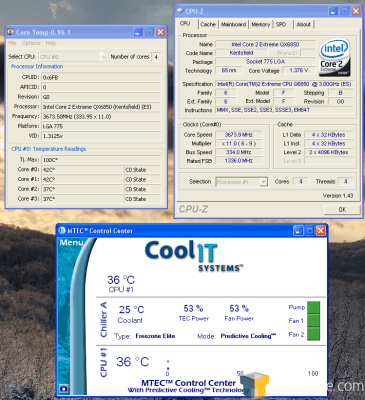 Full load really pushed the temps up. Seeing that this particular CPU does not begin to throttle back speeds due to overheating until 100C, I was comfortable with my results of load testing. 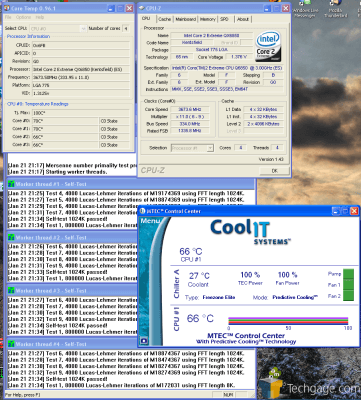 Impressive results all-around. Time to wrap up with my final thoughts.