In a market with over a billion (give or take a couple) different chassis for under $100, finding the “right one” is easier said than done. Fortunately, there are some vendors where you pretty-well know by default that their product won’t let you down. Corsair is one of those, and we’re here to see if its Carbide 300R lives up to those high expectations.

Since the release of its first chassis in 2009, Corsair has earned itself the reputation of being one of the better vendors in this segment. We’ve taken a look at four of the company’s chassis so far, and each one has earned an Editor’s Choice award – that’s quite a track record.

Unlike most companies that enter a new segment by starting off with simpler models to gauge interest, Corsair did the opposite. Its first chassis, the Obsidian 800D, retailed for a wallet-punishing $400, and its second release, the 700D, didn’t change too much. As time has gone on, we’ve seen the introduction of lesser-expensive models, and last fall, we finally saw the first ~$100 models from the company with the “Carbide” series.

With price-points of $80~$130, it would be a stretch to call models that fall into the Carbide line “budget”, but they’re still much more affordable than all of the other chassis in Corsair’s line-up. Thus, Carbide is for those who don’t want to overspend for their chassis, but demand the best possible bang-for-the-buck.

Ryan took a look at the $100 Carbide 400R last fall, and concluded that it offered a lot to warrant its entry-fee, such as a solid design, agressive aesthetics, lots of functionality and good cooling capabilities. The 300R that I’m taking a look at here is similar in size and design, but has been further tweaked to make an $80~$90 price-point possible. So let’s dive in, and see if the 300R can impress like the 400R did. 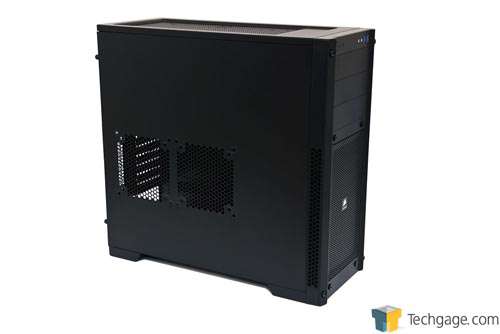 At first glance, it’s easy to tell that the 300R borrows many aesthetic and design cues from the 400R, but both chassis are varied enough so the 300R simply doesn’t look like the 400R with a couple of features removed. I actually prefer the side-by-side fan placement on the door of the 300R, rather than the stacked design on the 400R, because it’ll allow you to maximize airflow to any graphics card (or cards) installed. As a whole, the sides do look a bit more bland on the 300R, as there’s simply no design to speak of. 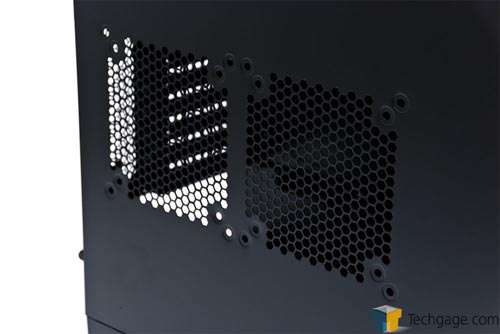 While the 400R features an all-mesh front, the 300R scales back a bit and saves the mesh for the bottom-half, which sits right in front of the 4x internal drive bays. One 140mm fan is preinstalled, and there’s room for another. If the second is installed, it’ll blow air right at your installed hard drives. 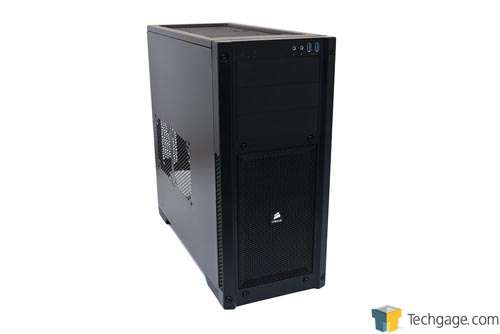 In this close-up shot, we can see that air also comes in through the sides. The two bolts that can be seen above the mesh (and also at the top and bottom of the chassis) are what’s responsible for holding the entire front part to the chassis. No screwdriver is needed, however, just a simple tug from the bottom. Putting it back on is as simple as lining up the holes and gently pushing each side back in. 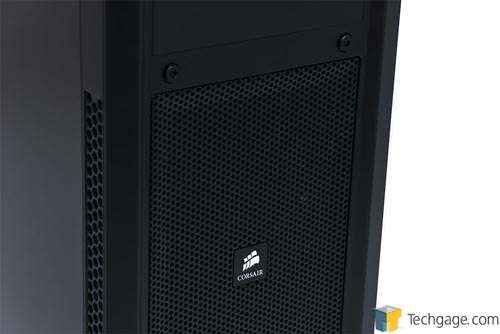 At the top, to the left we see the power and reset buttons with an HDD activity light nestled in the middle, and on the right, headphone and microphone jacks and 2x USB 3.0. These USB ports require a proper 3.0 internal header to be useable, so if your motherboard doesn’t have one, these ports will be useless unless you make use of a 3.0 to 2.0 conversion cable, which isn’t included. This is of course would turn the 3.0 ports into 2.0, but it’d be better than not having them operate at all.

I haven’t had a great deal of luck finding such a conversion cable at Newegg, but Corsair includes one in its “Carbide accessory box“, which retails for $4.99. 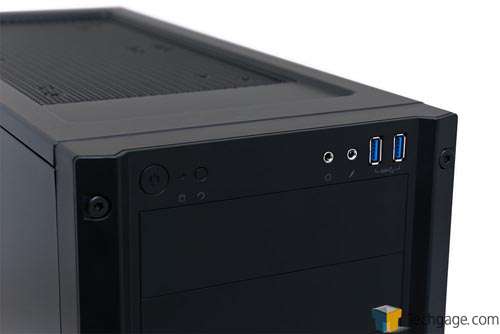 All but one of the fan locations on the 300R can take either a 120mm or 140mm, including the two locations inside the meshed top. 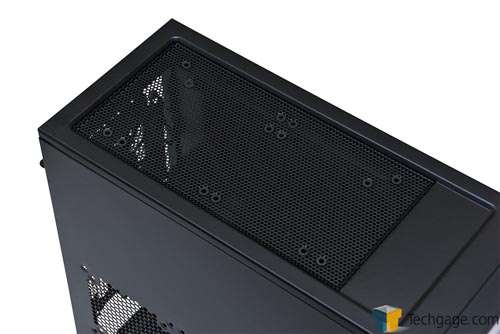 As mentioned before, there are 7 available expansion slots on the 300R, and instead of closing up the area to the right of the expansion slots, Corsair has this opened to allow more warm air to escape. 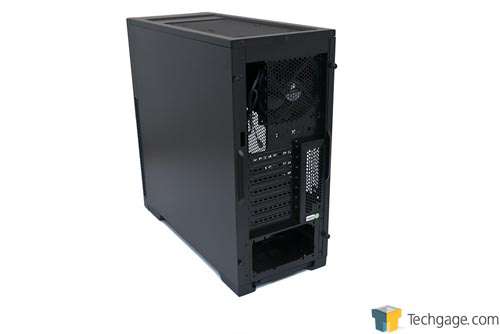 For those interested in going the DIY watercooling route, there are three holes for tubing here that can be punched by hand – or more accurately, the circle pieces can be twisted until metal fatigue kicks in so you can remove them. 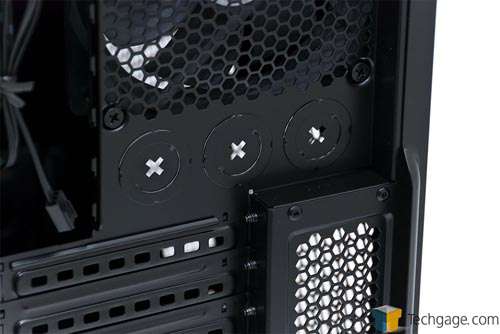 Up next, a look at the interior.