It has been a little while since Corsair last released a CPU cooler, so they’re hoping to successfully win everyone over with their all-in-one H50. Based on Asetek solutions, Corsair spent many months tweaking the H50 before they considered it complete, so let’s find out if their hard work paid off in the end.

To assure that our results are as accurate as possible, all of our CPU cooler testing is performed under highly-controlled conditions. Our test chassis is kept in a near-steady 20Â°C ambient environment, with readings taken before and after testing with a standard room thermometer. After we boot up our machine, we allow Windows to settle itself down for 10 minutes, to stabilize processes that might be running in the background. Once Windows is completely idle, we record the current CPU temperature as that in our results.

BIOS settings are verified prior to each run, and to help with quick switching of our various profiles, we make use of the motherboard’s ability to store multiple configurations. We primarily use two for our testing here – stock speed, of 3.0GHz, and also a maximum over clock, of 3.95GHz. Stock settings were achieved by using “Load Optimum Default”, and storing those as our stock profile. The maximum over clock was obtained after extensive testing and tweaking to insure it was stable. The CPU’s vCore was raised to 1.400v, and the Northbridge was raised to 1.30v. The RAM is run unlinked to run at factory speeds and voltages.

For our monitoring and temperature reporting, we use Everest Ultimate Edition 5, from Lavalys. It allows us to grab the results from each one of the cores, and the CPU as a whole, so we believe it to be indispensable to our toolkit. To help push our Intel Core 2 Extreme QX9650 to its breaking-point, we use LinX. The reason is simple: it utilizes LINPACK. After much testing with various “stress testers” in the past, we’ve found that running a multi-threaded tool that supports LINPACK, like LinX, pushes both AMD and Intel CPUs like no other. This results in higher temperatures than others (like Prime95) can muster, and also greater power consumption.

Because our test machine is equipped with 4GB of RAM, we set LinX to use 3072MB, and then set the test to run 5 times over, which takes about 15 minutes total. With the help of Everest, the CPU’s various temperatures are recorded throughout all of the testing, and also for a minute after the test ends. The maximum recorded temperature found in the results file is labeled as “Max” in our results.

Without further ado, here is a breakdown of our test machine:

Installing an all-in-one liquid-cooled CPU cooler requires a little more time to install over a typical air cooler, but it doesn’t require much more effort. The steps are as follows:

1) Install the proper backplate and hold down loosely to your motherboard. You need to be sure to keep it loose, as to make it easy to install the pump/CPU water block assembly. 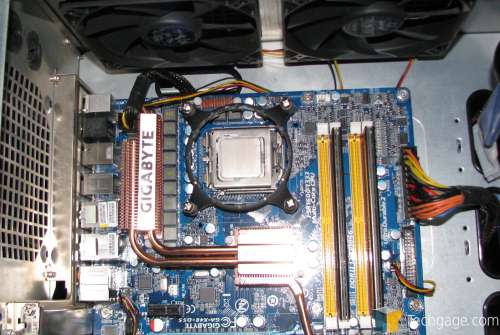 2) Mount the radiator to the back of your chassis, making sure to orient the fan to pull cool air from the outside in. Note that you might have to uninstall a 120mm fan from your chassis before doing this, if one came pre-installed. 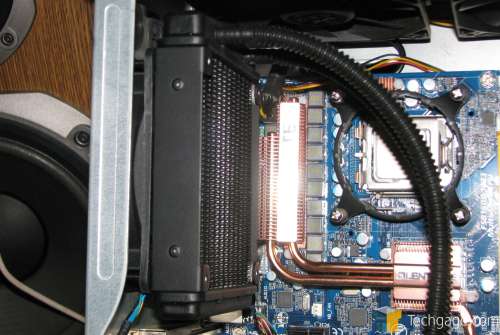 3) Insert the pump assembly into the bracket and give it a slight turn to lock it in. Then, plug the fan into the CPU PWM power connector and the pump into an available 3-pin motherboard fan power connector. 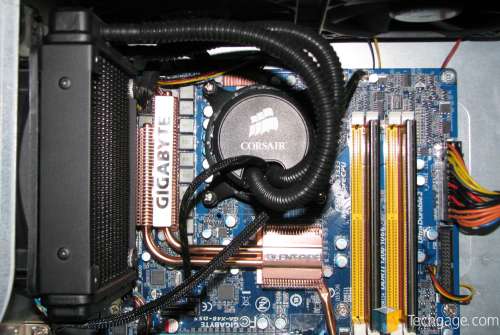 The results of our testing are as follows: 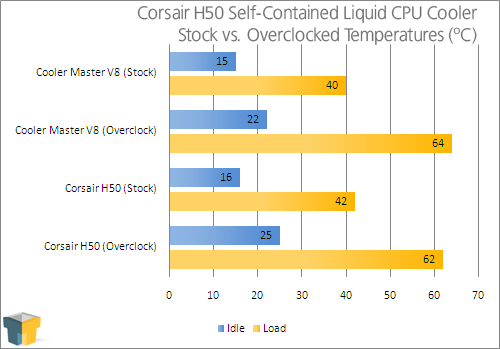 As you can see, the H50 performed very well in comparison to the high-end Cooler Master V8 air cooler, as it maintained a 2°C advantage when pushed to the limits of our test bed. Noise levels are also close to 5dB lower with the H50, making Corsair’s cooler a win/win.

Because Corsair’s recommendation of having the fan suck in air from the outside into the PC seemed a bit odd, I did an extra experiment… turn the fan around. Surprisingly, the temperature difference was negligible. Why they recommend the solution they do, I’m unsure, but if you do take their suggestion, it’s important that the rest of your chassis’ airflow scheme compliments it, or else you may wind up with heat build-up in the middle of your PC.