To assure that our results are as accurate as possible, all of our CPU cooler testing is performed under highly-controlled conditions. Our test chassis is kept in a near-steady 20Â°C ambient environment, with readings taken before and after testing with a standard room thermometer. After we boot up our machine, we allow Windows to settle itself down for 10 minutes to stabilize processes that might be running in the background. Once the PC is completely idle, we record the current CPU temperature as that in our results.

BIOS settings are verified prior to each run, and to help with quick switching of our various profiles, we make use of the motherboard’s ability to store multiple configurations. We primarily use two for our testing here – stock speed, of 2.67GHz, and also a maximum overclock, of 4.01GHz. Stock settings were achieved by using “Load Optimum Default”, and storing those as our stock profile. The maximum overclock was obtained after extensive testing and tweaking to insure it was stable. The BCLK was raised to 191MHz. The CPU’s vCore was raised to 1.400v, and the IMC voltage was raised to 1.30v. The RAM is run at 1.6V and does overclock with the CPU during overclocking testing.

For our monitoring and temperature reporting, we use Everest Ultimate Edition 5, from Lavalys. It allows us to grab the results from each one of the cores, and the CPU has a whole, so we believe it to be indispensable to our toolkit. To help push our Intel Core i5 750 to its breaking-point, we use OCCT Linpack testing. The reason is simple: it utilizes LINPACK. After much testing with various “stress testers” in the past, we’ve found that running a multi-threaded tool that supports LINPACK, such as OCCT (and also LinX), pushes both AMD and Intel CPUs like no other. This results in higher temperatures than others (like Prime95) can muster, and also greater power consumption.

Because our test machine is equipped with 4GB of RAM, we set OCCT to use 90% of the available memory, and then set the test to run 1 hour total. With the help of Everest, the CPU’s various temperatures are recorded throughout all of the testing, and also for a minute after the test ends. The maximum recorded temperature found in the results file is labeled as “Max” in our results.

Once again I find myself having more trouble than usual mounting the CPU brackets to the motherboard. While I would not say this was a big deal, it did take a fair bit of fiddling to get everything lined up properly and lucky for me, I remembered that the bracket must remain loose for the pump/block to have room for insertion. 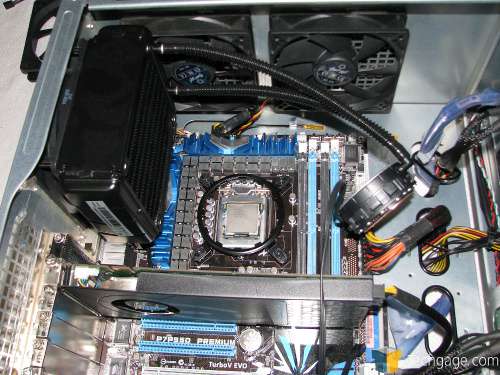 Mounting the block/pump is a simple of matter of lining up the slots, inserting them in and rotating the assembly slightly to line up the tabs. Once this is done, you need to simply tighten down the screws all the way for the back plate and you are done. Don’t forget to plug in the pump and fans. I chose to plug the pump into a regular 3-pin motherboard header as they are easier to set to full power. 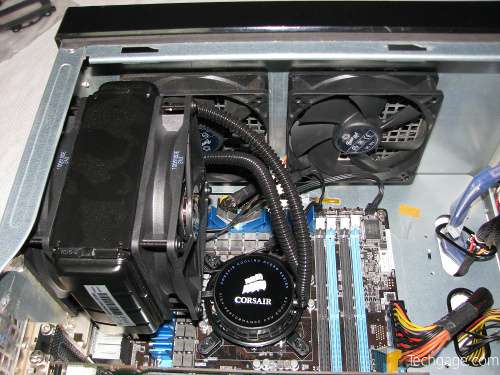 Once fully installed, you see just how much room this entire cooler takes up inside the case. A fair bit of space is required, but it is on the opposite side of the socket and for this reason you will have no issues what-so-ever with tall ram. So much ram that is produced today is oversized, so this is a big deal for many of us. 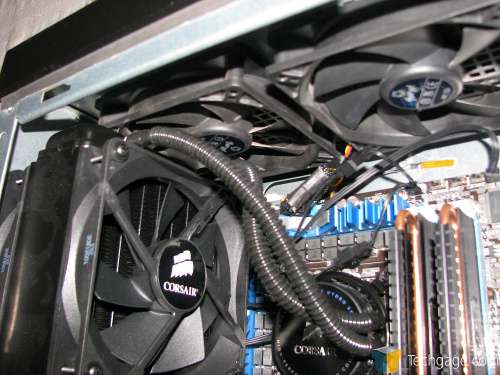 With the installation complete, it is time for the testing. The H70 obviously had big shoes to fill, and not only did it manage to fill them, but it wore them with pride. It went a bit further than just out-pacing its older brother, because it also beat out the high-performance Cooler Master V6 GT and Thermaltake FRIO that we recently tested. 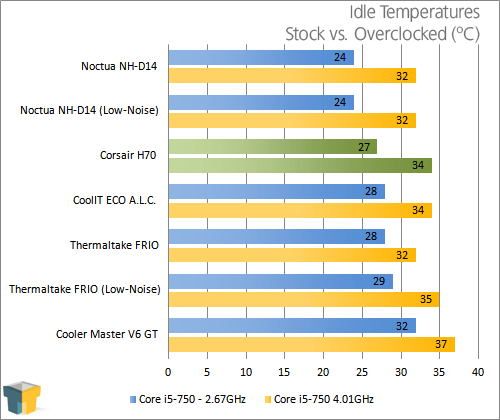 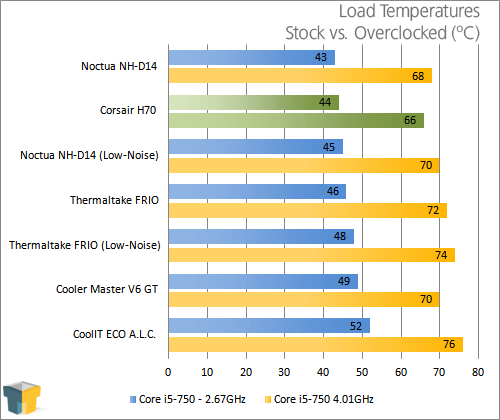 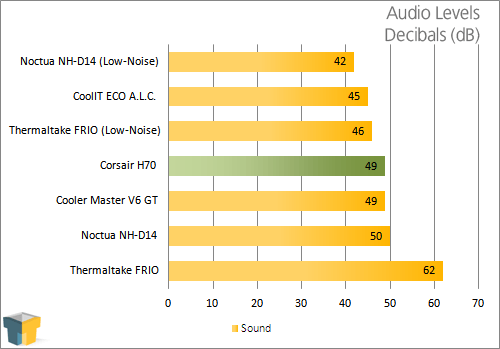 As you can see by the results, the H70 performed extremely well. We tested it for this review in the recommended position of the fans pulling through the backside of the case. I’m not sure if was the main factor for the convincing performance but you cannot deny the strength. We will be posting a follow up article on the H70 which will include varying the fan directions and speeds.