When we took a look at Corsair’s M60 “FPS” gaming mouse a couple of months ago, we found that while the hardware was excellent, the software was less so. For the M90, we decided to wait for the relevant software updates, which has since happened. So, after a delay, it’s finally time to take a look at Corsair’s “MMO” M90.

We’re a little late to the party with this review, but there is good reason for it. In our previous reviews of the Vengeance set of peripherals from Corsair, there was one thing that stuck out, preventing us from giving the M60 mouse and K90 keyboard Editor’s Choice awards. The software.

On the hardware side of things, Corsair had done an exemplarily job, we were pretty much enamoured with the kit, but the software left a bitter taste. It wasn’t garishly awful to look at, or complicated to use, but there were features missing and a tendency for the profile saving to ‘brick’ the device. Not cool, not cool at all.

So, rather than berate yet another device with poor software for the third time, we waited. And waited, and waited for some kind update to the whole affair. A couple weeks ago, it came. Version 1.11 firmware and software version 1.0.0.23-26. While not all requested features have been released just yet, the important ones have and the glitch that could lead to bricking, cleared. So, without further ado, our M90 mouse review. 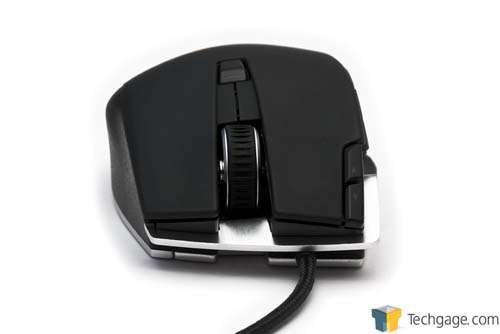 Much like the M60 reviewed previously, the M90 uses some of the base hardware, right-handed mouse with an aluminum frame and scroll wheel, a variable on-the-fly 5700 DPI Avago ADNS-9500 laser sensor, 1000Hz polling rate, large PTFE feet, but with 15 programmable buttons. There are also 6 hardware profiles to switch between (in-mouse memory), and up to 50 profiles in total via software. Also like the M60, it has hardware playback of macros, meaning it can bypass the Windows buffer and send commands directly to the games. 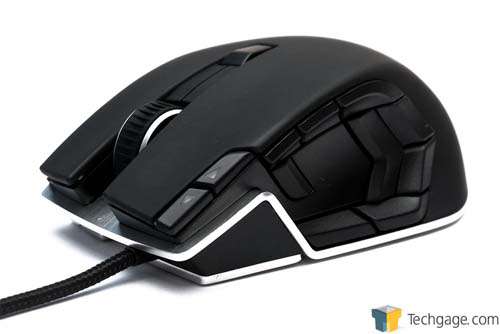 Targeted squarely at MMO players, the M90 comes equipped with 9 buttons on the side, but not in the usual grid array as seen with something like the Razer Naga. These buttons are spaced around the thumb, rather than directly under. I’ll be honest, I was very skeptical about this at first; while clearly meant to be an ergonomic solution, my fear was that the large spacing could cause issues with thumb strain. The impact of this will be explained later in my final thoughts.

With a lot of gaming-grade mice, the switches used for the buttons tend to have lighter weighting, requiring as little force as possible to push and activate to improve reaction times. With the M90, this is not the case at all, and quite a worry for me. Having used a lot of gaming mice over the years, I’ve become accustomed to these light switches, so when the M90 arrived, most of the buttons suddenly felt really heavy.

The main 3; left, right and middle, were all fine, even the button behind the scroll, but all the side buttons were not the usual sharp and soft click I’ve come to expect. With more of a hard thud and a bit of a spongy ‘give’ to them, things were not off to a good start. Now, this is largely a subjective, personal taste issue, and not everyone will like the more traditional sharp click, as it’s quite easy to push the wrong button. I’ll touch on this issue again later in the final thoughts section as I give the M90 a good thrashing in SW:TOR and Rift. 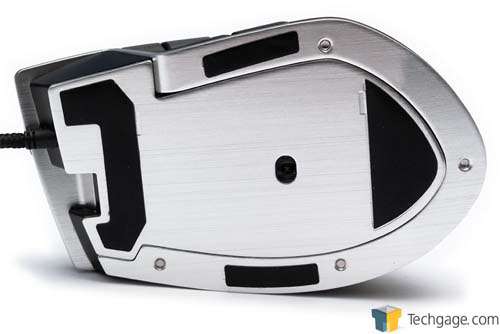 On the underside, things a little plain and simple. No removable weights to tune, just a lot of aluminum and some large PTFE feet for easy gliding. The lack of a PTFE ring around the sensor is also good, as there is no dust trap. 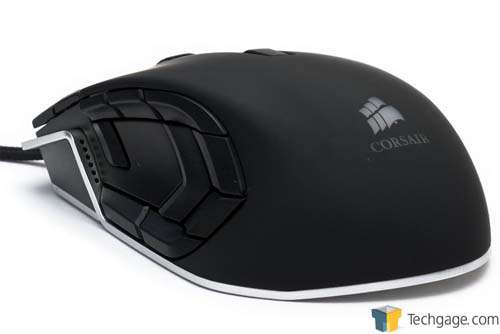 There are 6 lights just in front of the thumb buttons to indicate which hardware profile is currently active. Speaking lights, there is also a large white light emanating from the Corsair logo on the back and the pleasant blue glow from under the scroll.

On the next page, we’ll discuss the software and the recent changes made.