Now that we’ve completed taking a look at all 22 coolers on hand, let’s put each and every one through our gruelling tests! Before we jump right into the results, I’ll list our tested system specs once again. For specific testing methodology, please refer to the first page of this article.

Our first results graph shows the top-to-bottom results for our tests at stock speeds. Load temperatures are valued more than idle, so the list is sorted with that in mind. Each cooler was able to keep the CPU under the 85°C threshold – a good sign.

With twelve having the ability to keep the load temperatures under 60°C there is no clear-cut winner. About the only consideration in choosing amongst them would be noise and size. As you can see from the graph below, even the lowest performing cooler performed admirably. 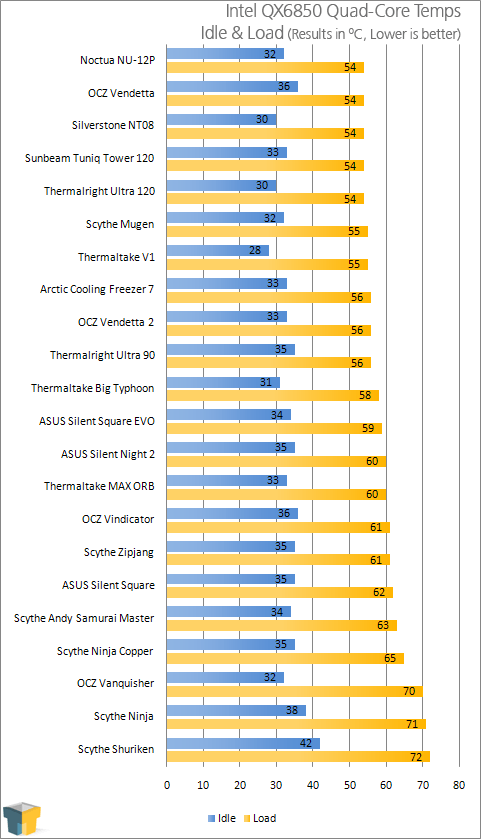 Once we turn up the heat, we quickly separate the men from the boys. It’s no surprise that the Sunbeam Tuniq Tower 120 and the Thermalright Ultra 120 Extreme were on the top of the list. What did surprise me was how well the Silverstone NT08 did. Staying within 1°C during testing shows it is a top tier cooler and is ready and able to quench the heat of a highly overclocked Core 2 Quad CPU.

The Noctua was the only other cooler able to stay in the 60°C’s when the clocks were turned up, while the OCZ Vindicator came real close to losing the battle with the QX6850. 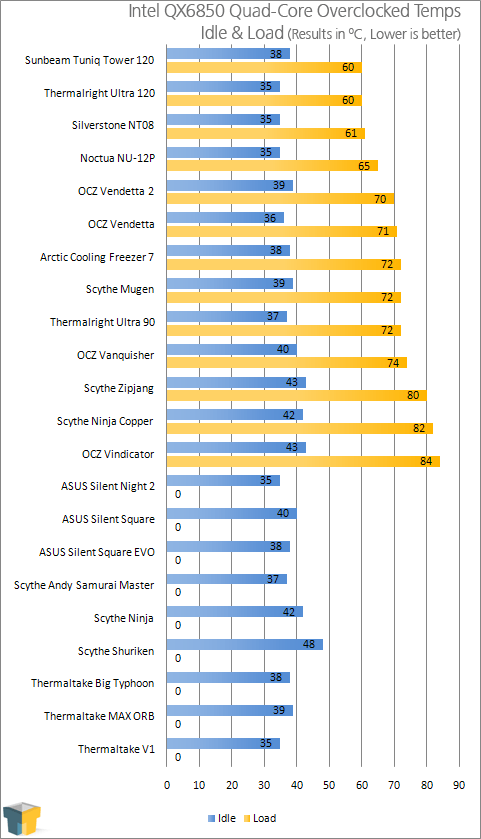 You might wonder why so many failed the overclocking test. The heatload of a Quad-Core is very intense. Once it reaches a certain point, it rises rapidly. Many were able to stay below 80°C for up to 40 minutes of the testing, but they eventually succumbed to heat and caused the system to shutdown.

So I would not call them bad coolers. I would instead state that most were not even designed for the heatload and would not recommend them for overclocking purposes. If you are an avid overclocker, stick to the top 5 for the best results.