by Rob Williams on April 27, 2007 in Miscellaneous

It’s not often that Crucial releases a new high-end kit, but they’ve finally caught up to everyone else and released Ballistix clocked at DDR2-1066. Today we are taking a look at the Tracer version and look to see how far we can push them over stock.

If there is one memory company that knows what they are doing, it would be Crucial. Although their enthusiast kits tend to be overshadowed by the likes of OCZ, Corsair and others, when they release a new high-end product, people pay attention. In fact, on the day that the press release crossed the wire, I was surprised to see it posted on sites that don’t even normally include hardware news. Crucial has no doubt done well to retain their large fanbase.

If anything struck me odd though, it would be the DDR2-1066 speeds. I was curious why everyone around was so excited at that fact, when kits of those speeds have been out for well over a year. Well, that’s Crucial for you. They have their ways to enthuse people ;-)

So this is not an ultra-high end kit, such as the OCZ Reaper that we took a look at last week, but on all sites I checked out it was priced right along other 8500 kits, but I will get more into this in our conclusion.

It’s been about six months since I’ve taken a look at another Crucial kit, which was the PC2-6400 Ballistix. That proved to be a solid offering, but not for overclockers. In that regard, I was left less than impressed. Jumping into this new kit, I had renewed enthusiasm and hoped to at least push it to 600MHz as I have with all other recent kits I’ve reviewed.

Aside from that, this will be the first Tracer review we’ve had, and also the first Tracer kit I’ve ever touched. Until now, I wasn’t even sure what the modules looked like in action, but I can say right now, I liked what I saw. Let’s have a closer look.

Crucial doesn’t use any special packaging for their modules, so this is what you will see if you order any one of their kits. Though it’s not that outgoing, it keeps the modules very safe during travel, which is the important thing. 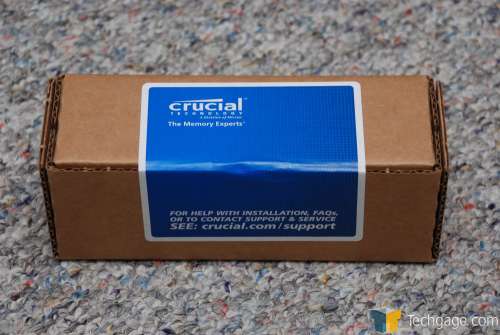 For some reason, these Tracer modules proved a little difficult to photograph while retaining good lighting and color. It could be the mirror trim, who knows. This is a very simple spreader compared to some on the market. It has no ripples/fins to help with heat dissipation, but it does leave good room for airflow. 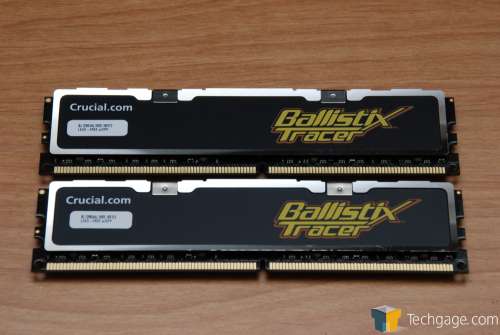 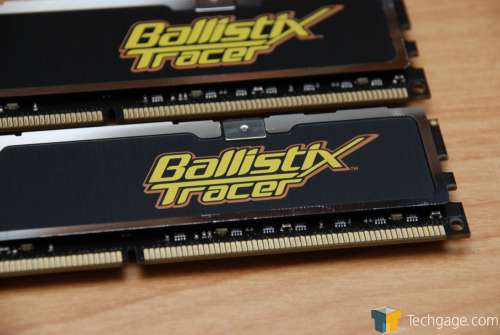 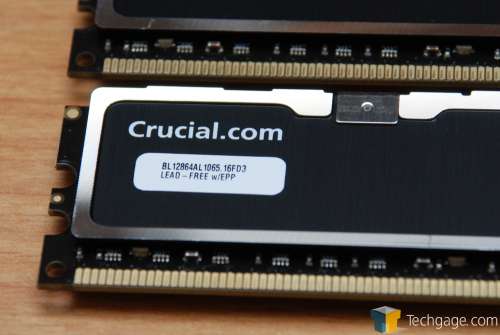 Overall I enjoy the look of the modules, but one thing really stood out to me. 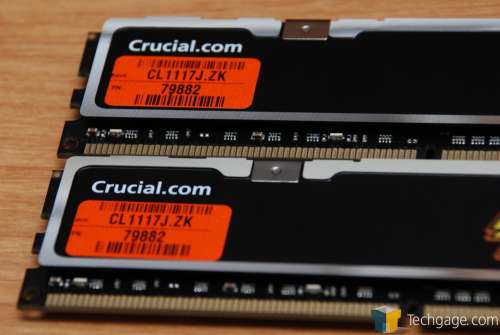 Was orange really the best color Crucial could come up with? If this sticker was black with white text, it would have looked far better. Orange stands out like… orange on a black module. You can see the LEDs at the top of the modules, but it’s hard to actually see them well without squinting since it’s so dark. 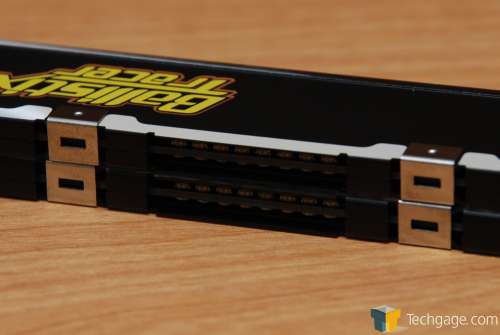 I’ll share a photo of the LED’s in action later in the review. For now, let’s hop into some overclocking action.