In 2007, a meme was born. To date, it still hasn’t died. You know which one I’m talking about. With Crysis 3, that meme has good reason to keep on truckin’, because it’s one of the rare games that has the ability to make a high-end PC beg for mercy. At 1080p and max detail (1x SMAA), the game ran at about 28~30 FPS on my PC equipped with an Intel Core i7-990X six-core, NVIDIA GeForce GTX 680 amd 12GB of Kingston RAM.

As I pointed out in our look at NVIDIA’s Titan last week, in order for the game to be enjoyed at 5760×1080 (3 displays) at max detail and 2x SMAA, three of these cards would be required. That’s $3,000 worth of GPUs. After playing the game with my lowly GTX 680, I can begin to understand the reasoning for that. 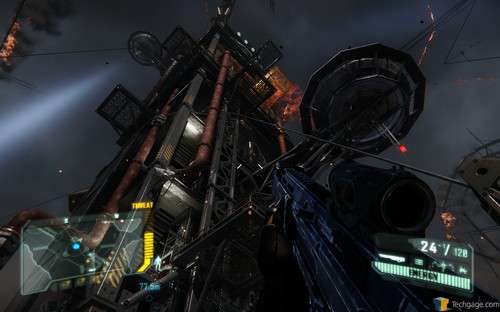 That said, the game is actually very playable at around 30 FPS, and because I was so stubborn and didn’t want to decrease the detail levels, I played through the entire game that way. The video at the start of this review was recorded using the exact same settings I played with, so you might be able to understand why I put up with the lower framerates.

Given all this, it should come as no surprise that Crysis 3 is one of the best-looking games to ever grace the PC, if not the best-looking. In fact, I believe it to be the only game that actually requires DirectX 11 to play. A bold move by Crytek, to be sure.

While you can expect tessellation in certain areas, the sheer level of detail goes beyond that. Even at a distance from something, zooming in with a good scope can show just how detailed some objects and surfaces are. Outside, you’ll see grass and trees swaying in the wind, incredible rain and water effects, and elsewhere, detailed particles, global illumination and volumetric shadows. These all combine to make this one of the greatest visual treats the PC has ever seen.

With all the good that Crysis 3 brings to the table, let’s round out this review by tackling the things that left a bad taste in my mouth, or at least weren’t ideal. 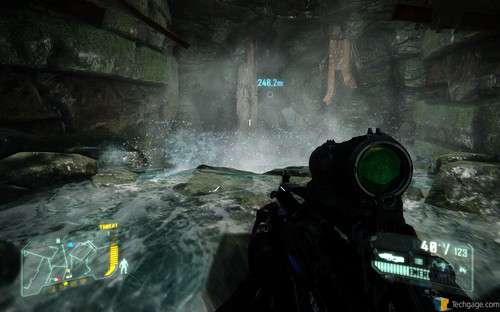 A weaker aspect of the game is the enemy AI, which at times is hit or miss. Sometimes, it seems totally realistic – other times, not so much. Hiding behind a bush, it wasn’t too surprising if my stealth cloak ran out and an enemy could spot me from 100 ft away. In Crysis 3, enemies simply have eagle eyes if they’re looking in your general direction, and even when not, coming out of cloak mode directly behind an enemy could sometimes alert them to your presence, even if you don’t move.

There are other times when the AI simply doesn’t do what it’s supposed to. In one instance, a group of two friendlies were stuck inside a passage, disallowing me to get past. Thankfully, this happened to be an area that triggered a save point, so simply reloading fixed the problem. Another strange issue can be seen in the video I embedded at the start of the article. In one area, you’re apparently meant to kill every enemy on your way through, because if you use stealth mode to avoid everything, it risks the chance of bugging the enemies. You can see this exact incident at 11m 30s. 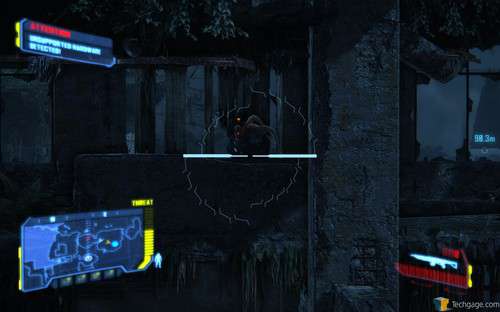 Another complaint I have relates to the map. It’s found inside the pause menu after you hit an arrow to move from the objectives to the map. Why couldn’t the map be brought up with the “M” key as is commonly done? To make matters worse, the map isn’t exactly the easiest thing to follow.

The last niggle I can mention is somewhat minor. It relates to certain boss fights where I had no sweet clue if I was actually attacking them like I should be. It was never obvious that I was doing damage when I actually was. The last boss battle is exactly like this, so it led to some frustration.

In the end, though, I thoroughly enjoyed Crysis 3. Admittedly, I wasn’t a huge fan of the previous games, and ended up not playing either for too long. However, my interest has definitely been triggered to revisit the older games and given them an honest go after having completed this one. The game has a couple of flaws, but none that are major, and the fact that I feel like completing the game again a second time helps assure me that it was a good one. 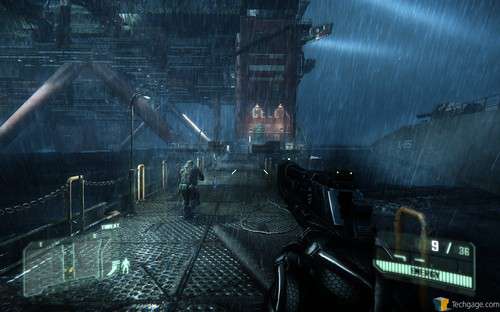 The downsides, of course, revolve around the game taking a mere 6-7 hours to complete. If you can get past that aspect, and know that you’ll replay the game, it’s definitely worth it – perhaps even moreso if you are a completionist like me and want to seek out all of the hidden items strewn throughout the game-world.