In the past, customization for OS X has been difficult, if not next to impossible! With newer software tools however, it is possible to customize this ever popular modern OS to your liking. We examine the claims of several programs that help to make OS X feel like home.

Even though Apple’s OS X Aqua interface has been praised as elegant and visually appealing, it is, at the same time, somewhat limiting when it comes to customizing it to suit individual tastes.

Apple is run by a pioneering genius, who’s strict control over every little itty-bitty element of OS X’S GUI has made it very difficult to modify or customize. In fact, Apple’s tight control over it’s default ‘look-and-feel’ was so tight that many critics have speculated that customizing this popular and growing OS would be next to impossible.

Even Arlo Rose, the developer of the most popular Mac Classic customizing program, Kaleidoscope, was so discouraged by OS X restrictions that he dropped out of the OS X customization game early on. But does this really mean that’s its impossible to customize or change OS X, or can one indeed go beyond Apple’s vision and customize the OS to suit his to his or her own personal taste?

Yes, I’m pleased to say that all of the early criticism’s of Apple’s customization road-blocks have been overcome and it is now possible to customize pretty much any and or all of OS X’s Aqua GUI to suit your hearts content.

So, with this in mind, we will look at several programs and utilities for customizing the ‘look-and-feel’ of your OS X desktop. These include both shareware and freeware programs, such as UNO, ShapeShifter, ThemePark, Xounds, Clear Dock, iClock, iCan, Weather Dock and Candy Bar.

One problem currently that OS X has, has come directly from Apple’s previous versions of OS X: Cheetah, Puma, Jaguar, Panther and, Tiger. This problem stems from Apple mixing several different and conflicting elements from each version into one. This, sadly, has resulted in a very inconsistent theme throughout the latter versions. This is really rather strange when you consider that Apple is famed for its design expertise, one that stresses simplicity and functionality above all. This problem is one that Apple states it will address and overcome in the next release of OS X, Leopard, which will pounce sometime this October.

While we wait, with baited breath for Leopard, we do have alternatives, in the meantime. One of these is ‘UNO,’ a free utility that will harmonize the different inconsistencies of the previous versions of OS X into one complete and consistent theme. This great program from ‘Interacto.net’ finally gives OS X a clean and consistent look or theme that is, in fact, more OS X looking than that of Apple’s own recent version.

‘UNO’, which comes from the Latin word for ‘One,’ really looks great. It is clean and very professional looking and is as easy to install, just as is any other OS X program. 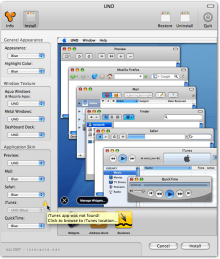 Of course, as nice as UNO is, it still leaves you with only two choices, that of it’s own look or that of going back to Apple’s inconsistent one. What if you like the idea of having lots and lots of choices? The answer here lies in a great shareware program called, ‘ShapeShifter’, a shareware program that brings to mind Window Blinds on the PC side.

‘ShapeShifter’, by Unsanity software, is the best known and most fully featured theme changer for OS X. I personally use it, as there are a host of great many ‘canned themes’ that one can download. It’s also highly recommended because of it’s security feature, namely that it does not directly modify or change any critical elements of OS X’s core, something that has dogged similar programs in the past. I know, as I have suffered from the horrors of programs that mess around with the graphical core of OS X! Reinstalling your OS is hardly what I would call fun, so ShapeShifter is a breath of fresh air indeed. 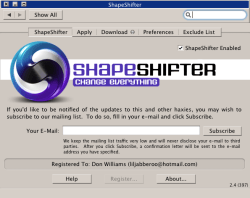 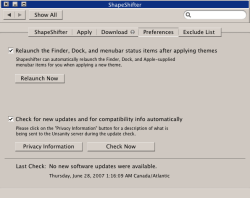 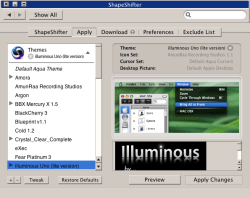 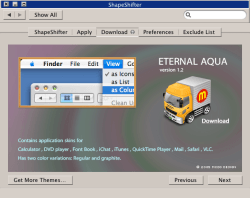 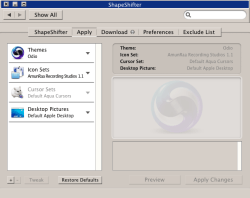 What is really remarkable about ShapeShifter is the fact that it allows to change just about anything to do with OS X’s GUI be it windows, apps, menus, buttons, and virtually any thing else that you can think of, including desktop backgrounds and icons.

As a personal user of this program, I can highly recommend it, if for no other reason then the freedom of being unshackled by Apple’s nice, but limited and inconsistent Aqua default look and feel. Freedom comes at price, of course, and in this case its $20 US.

‘ThemePark’, by Geekspiff, is a free program that compliments ShapeShifter by allowing you to customize in the following ways:

I, being somewhat lazy, have not yet personally tried using this program, but if your not satisfied with all of the many themes for ShapeShifter you can now try your hand at creating own! This includes mix and matching various elements from any number of pre-existing themes!

Also from makers of ShapeShifter comes another program called, ‘Xounds’. This is a sound customization program that I have used for years. It works great and can enable you to add sounds to just about anything you do, from moving folders around, for scrolling, moving your mouse with menu’s, etc. Why, you just name it and Xounds probably can give it a cool sound to accompany it.

Still another nifty program, from Unsanity is it’s free program, ‘Clear Dock’ and it does exactly what the name implies, it will remove both the boarder and color from OS X’s dock. Not only that, but it can also color your dock any color your heart is set on. I wouldn’t be with out it.

In fact, this same company has a host of other customization products that bring back many features of Mac Classic, such as: FruitMenu that brings back Classic’s Apple menu; Menu Master allowing you to change or remove shortcut keys with ease in any application; WindowShade a program that you can use to redefine the way window minimization works by assigning customizable behaviors to the action, including popular Window Shade, Minimize-In-Place, slick Make Transparency.