Big screens are the new black. It wasn’t but a few years ago when people commented on my “tiny” 1280×1024 resolution on a 17″ monitor, but now 1920×1200 on a large widescreen doesn’t make people look twice. The fact is clear. There are numerous reasons for purchasing such a large monitor, but like most products, it will depend on your interests and needs. Personally, I didn’t realize I had a “need” at all, until I received this monitor for review.

If you have an important workflow, splitting it onto two or more monitors makes things far easier to deal with. Our Senior Editor Greg King will attest to that. His ideal setup is 3x 19″ monitors which he claims to be the ticket to “ultimate efficiency”. I on the other hand, dislike multi-monitors, although I admit I have never tried out such a workflow for a prolonged time. Personally, having one large monitor beats everything. As I mentioned in my example above, I moved to this monitor from my 1280×1024 and essentially gained 50% length and 10% height. That is a lot of real estate and makes multi-tasking much more enjoyable.

If you find yourself with a need for a larger monitor, your options are endless. Dells own 24″ UltraSharp monitor is one of their best selling, and for good reason. Like the 2707WFP, it also offers 1920×1200 resolution, only in a smaller frame. So who exactly is this new release targeted for? If you find 24″ a wee bit too small and a 30″ far too big, then the 27″ might perfectly suit you.

The other immediate choice that consumers who are interested in the 2707WFP will have is the 2407WFP. Both are incredibly similar specs-wise, but the 24″ has slightly higher luminance, at 450cd/m. The price will also come into play, as the 24″ sells for $560 while the 27″ sells for $999. One of the reasons for the price hike is the fact that this monitor has a unique frame, it’s unlike anything else Dell has put out in the past. They urge, “We wanted to create a monitor that looked as good from the back as it does from the front.” That they have done well, and we will see proof of that shortly.

This is the first large monitor that we’ve had for review, so at the current time I don’t have a great basis for comparison. I will instead be going by what I think, compared to what I’ve seen with current monitors I have, despite them being far smaller. Excuse the room in the background. Huge monitors and small rooms don’t mix too well.

Once hauled out of the box, you will have the monitor as seen in the picture. Each side is wrapped with thin foam and the screen is protected with rigid, yet pliable plastic. Tape and clear stickers are used to keep everything in place during shipping. The Dell logo and other mirror-like surfaces are protected as well. 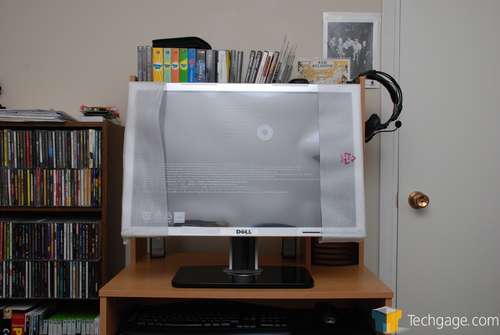 For monitor testing, I am using my benchmarking computer, where I previously had the ASUS PW201. In order to show the real differences in size between a 20″ widescreen and the 2707WFP, I took before and after photos. 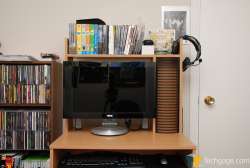 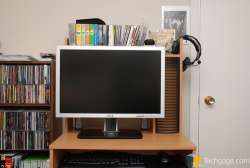 The differences are staggering. The above pictures also allow me to perfectly explain how Dells monitor differs in some ways to a few others on the market. The ASUS monitor is glossy, most common with laptop screens. This allows the picture to appear brighter, but it comes with side effects. The primary one being glare, as you can see evidenced there.

The 2707WFP has a matte-like finish, that is virtually glare free. This means that the picture will not be as blatantly bright as the ASUS, but is easier on the eyes, in my experience. It also means that you will be able to see what you are doing even when sunshine is in the room, something that I consider a downside when using the ASUS.