Before we get into the tests, I would like to point out that with a GPU installed in the top slot, it will be virtually impossible to change out RAM as the video card’s PCB is just to close to the memory DIMMs. Nothing incredibly different from many other motherboard available today but something that we feel should be pointed out. 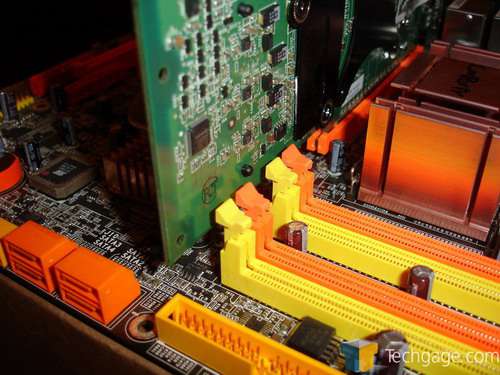 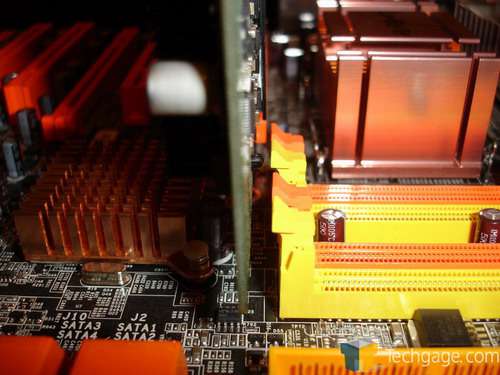 In our last motherboard review, we looked at the Asus Commando. In that review we stated that in order to keep relevant results, the same hardware will be used in each review this editor does. Until we see an absolute need to change our benching hardware, we will continue to use the following hardware:

Throughout the review process, we will be using a suite of benchmarks that we have used in the past and feel that these benchmarks, some real world and some synthetic, will provide a fair comparison to each of the motherboards used.

When benchmarking the games, we use FRAPS to get an average frame rate over a set amount of time. The same save game is used on each motherboard and each run is completed three different times. The results are then averaged for a final overall score.

First up is Cinebench. In this benchmark, a picture is rendered once using a single core and if the PC is using a dual core processor, it will then render the same picture using more than one core. While technically a synthetic benchmark, it does give an example across the board, of the CPU performance of each of the motherboards. In Cinebench, there is virtually zero difference between the three chipsets. 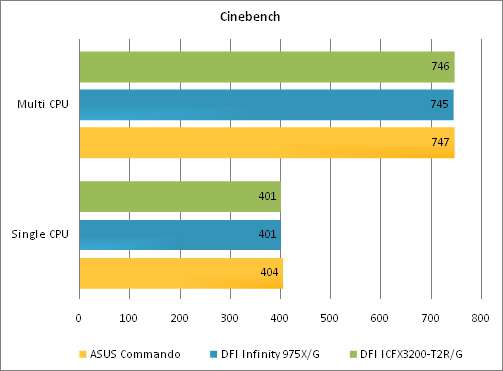 The next bench on our list is a favorite of ours here at Techgage. Sciencemark runs an array of scientific calculations and at the end, it gives us a score based on how well the CPU was able to calculate the tests. In our tests, we always run the molecular dynamics and cipher bench tests. The RD600 calls short in Sciencemark but not by much. 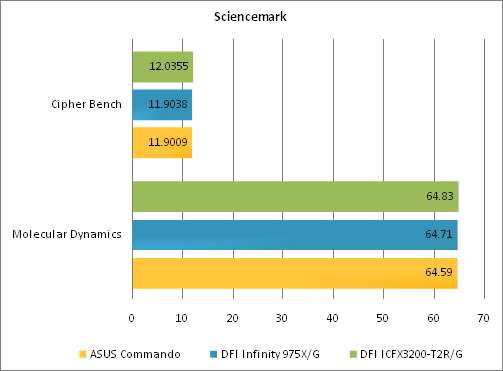 n PC Mark ’05, many different tests are run to test out each of the important components in a PC. The benchmark was designed to simulate real world usage patterns and in doing so, it provides a complete performance overview of the entire system. This is still a synthetic benchmark, but is an industry standard and this is why we use it in our tests.

The results are spotty on this one. The RD600 looses to the other chipsets in the HDD and CPU tests, bests out the others significantly in the graphics test, and runs in the middle in the memory and overall tests. 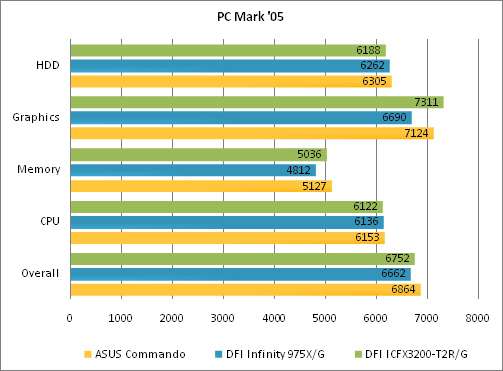 Another favorite is 3D Mark ’06. The benchmark is a graphics and CPU stressing beast and can quite easily bring a PC to its knees. It’s because of this that we use it. Overall, the RD600 is right in the middle of the pack. 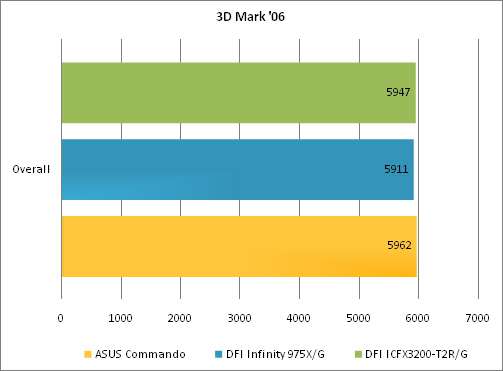 In Super Pi, Pi is calculated to a determined value. In our tests, we calculate Pi to 1 million places, 4 million and 8 million. This gives us a decent idea of CPU performance compared to other platforms. When calculating Pi, the RD600 falls behind the P965 and bests the 975X chipsets. 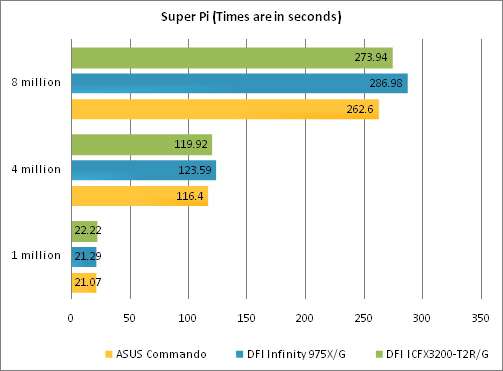 To test the subsystem, HD Tach is used. We test both USB and SATA hard drives. Once again, the ICFX3200 is right in the middle with very little difference between the three boards. In the USB test, the ICFX3200 was significantly slower than the rest. 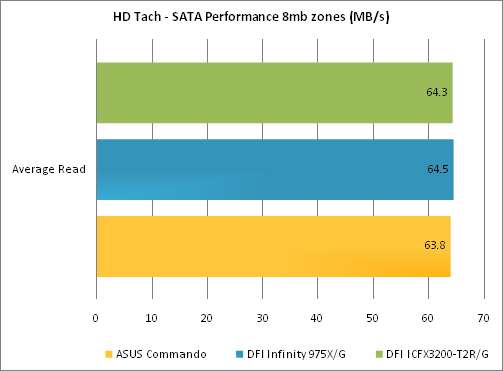 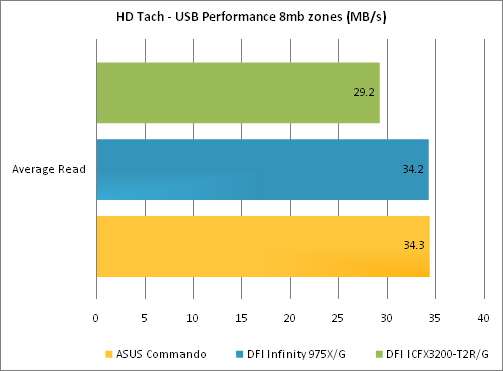 Now we get to the games. The games we are using are Ghost Recon: Advanced Warfighter, S.T.A.L.K.E.R. and F.E.A.R. As stated earlier, each of these games are benched three different time using the same saved game and the results are averaged.

In Ghost Recon, as in the other benchmarks, the ICFX3200 was right between the two other motherboards. In a real world gaming session though, there is virtually no difference between 48.8 fps and 50.2. 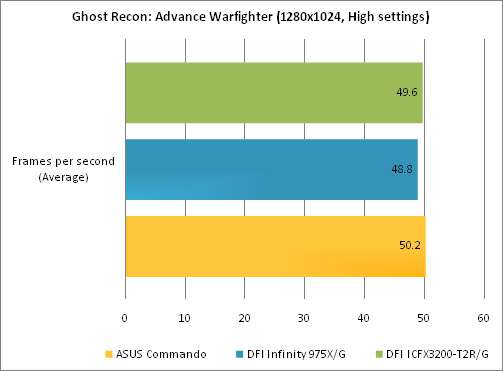 In F.E.A.R., we see the same results as the Ghost Recon. The ICFX3200 has found itself right between the other two boards. 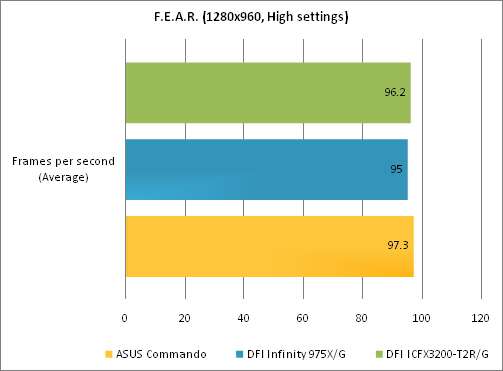 In S.T.A.L.K.E.R., the Commando and the ICFX3200 finished with virtually the same score with the DFI Infinity just one frame per second behind. 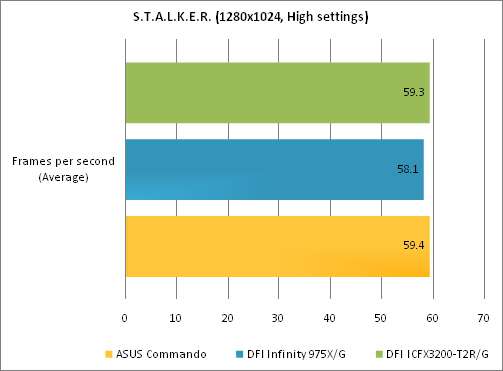 When testing CrossFire, we see more of the same. The scores of the Infinity and the ICFX3200 are virtually the same. We did run into problems running CrossFire on the Commando but after exhaustive testing, this turned out to be the fault of the x1900 CrossFire master card and not of the motherboard itself.

Unfortunately, we did not have the time to get the replacement card in and retest the Commando with both cards. I cannot imagine it doing any better for the simple reason that the P965 chipset that it runs does not handle CrossFire properly. One lane will run at x8 while the other is locked at x4.