Since before the AM2 platform was launched in May, enthusiasts everywhere were anticipating DFI’s LanParty board. Sadly, we had to wait a little while as they had some kinks to work out. It’s finally here though, so we can all relax and see what it’s all about! DFI made a huge splash early last year with their LanParty Ultra-D and SLI-DR motherboards. Both were craved due to the major overclocking potential that both boards supplied. This quickly led to special versions of the boards being released, like the Expert and the rare Venus.

We took a look at one of ASUS’ top boards a few weeks ago, the M2N32-SLI Deluxe. That board left me impressed, because it’s well rounded for multiple uses. However, where it did lack was the overclocking arena, due to it’s low overall voltage options. However, DFI is not worried about giving the user plenty of voltage and tweaking options to play with… as we will see in our look at the BIOS. If this board is anything to the AM2 platform as the Ultra-D was to the 939, we may just have a winner.

This board is not packed with a slew of extra features like the M2N32-SLI Deluxe was, but that’s a good thing. This board is catered directly to enthusiasts who would never use the extra features included like that board has. As far as AM2 boards go though, this one is packed to the brim with top rate components, such as NVIDIAs top SLI-capable chipset. 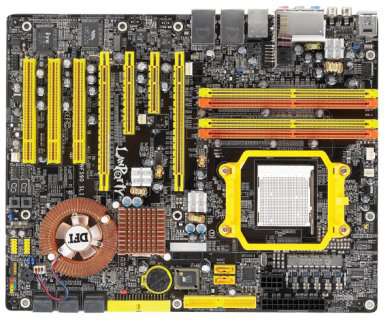 For those new to the nForce 590MCP chipset, here are the main features that it offers.

So, now that I have whet your appetite, let’s take a look at the board and it’s layout!