Genie BIOS is where all the good stuff happens, and if you have had a previous DFI LanParty board, you know what to expect. Though, this time around the options are quite a bit different… some to reflect the AM2 platform specifically.

You can set the HTT, multi and width. Cool’n’Quiet is also here if you are in need of it. The C51/MCP55 options have to do with the link between the CPU and chipset, but I have not seemed to get very far with it… yet. 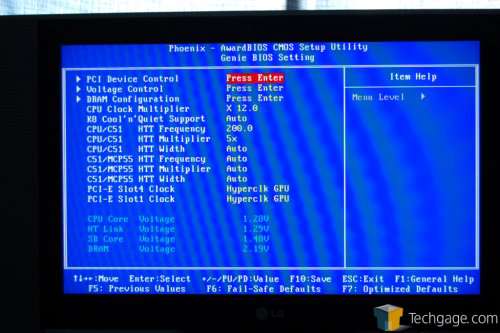 The PCI Device control allows you to disable lan ports, or the audio. Here you can also set up a RAID. 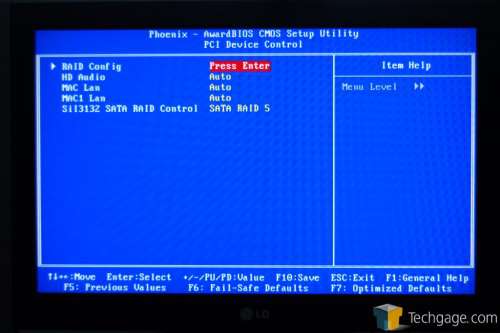 Here is the most hardcore part of the BIOS, and by hardcore I mean you must play it safe. DFI has given ultimate control over voltages, and that’s no exaggeration. While most motherboards offer Vcore increases of 0.0125v, this doubles the amount of flexibility by allowing increases of 0.00625v. The voltage control begins at 1.0v, and goes straight to 1.6v. This is impressive in itself, because many motherboards still don’t allow 1.6v that easily, at least without the % modifier. 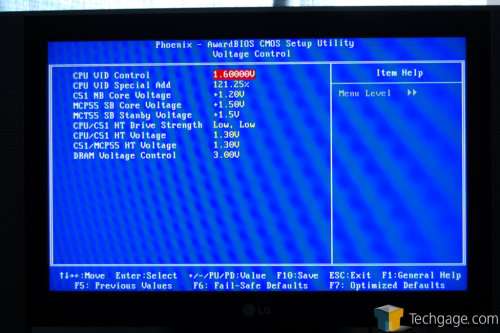 If that was not enough, there is an option for the Special Add %… which ranges from 100.00% to 121.25% that you see in the picture. Choosing 1.6vcore and 121.25% would effectively give you an insane 1.94vcore. This is hardly safe unless you have a very proper setup, and don’t mind a CPU suicide. This much voltage can kill a CPU, so you have to understand what you are getting yourself into. More times than not, the PC just wouldn’t boot if it’s unstable, but sometimes it could go much worse.

The rest of the voltages are rather normal, except for the vdimm. The chipsets do not get to extreme highs like the others, but there is no need. The Vdimm capabilities is one reason I have been enjoying this board so far. Instead of most boards that allow 2.4v or 2.5v to the memory, this board allows you to reach 3.0v with small increments. Like the top vcore, 3.0vdimm can kill your memory… it’s already happened to a few people out there. I have found that there should be no reason to go beyond 2.7v or 2.8v, but even that is dangerous territory. If you need to go beyond that, then you have a poor kit of memory.

DFI gives a lot of “power” to the user, but it still is up to you to make sure you play it safe.

Under the DRAM configuration is what you would expect… drive strengths and timings. 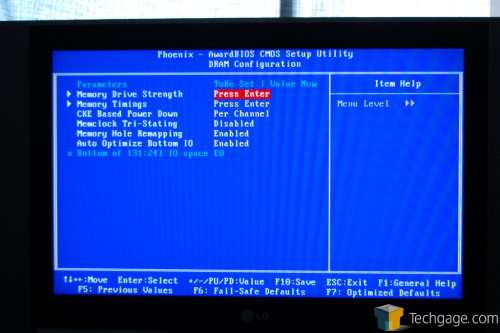 As you can see in the picture below, there are many options here that many other boards don’t offer. There’s something else here that I like even more than this fact though. Ever go into your BIOS to change a setting that’s set to Auto, and have no -sweet- clue what you should set it to? Well, here it will show in gray what the current setting is, so you know where to start. This is awesome because it prevents you from running SysTool or some CPUID program to see what current timings are at. 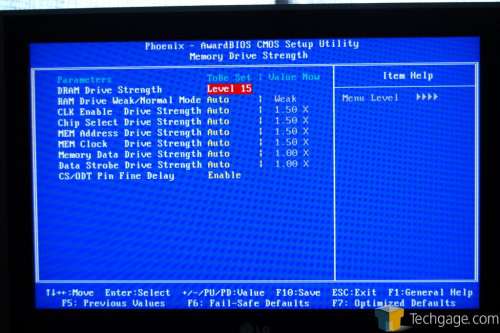 Well, Drive Strengths are not always as important as timings, so that fact proves even more useful here. “Oh no! What should my tRRD be?”. Well, as we can see, it’s 3 right now, so it may prove challenging to tighten, but there’s only one way to test! Yes, I love the fact that the settings are displayed there… it makes things much, much easier if you don’t want to memorize everything. 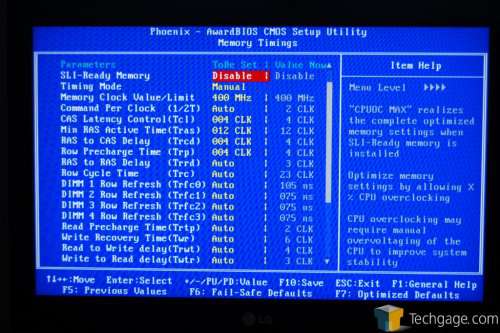 That aside… this is a feature rich BIOS as you can tell. All of the timings you need are available you to, including the ability to use EPP features if you have memory equipped with them. Of course, if you are a “real” overclocker, EPP is laughable.

One of the primary features that LanParty boards have become known for is the CMOS Reloaded. This effectively allows you to save up to 4 BIOS profiles so that you can return to your preferred overclocked or stock settings quickly. It works well… and the settings have all stayed after forcibly resetting the BIOS, which was nice to see. 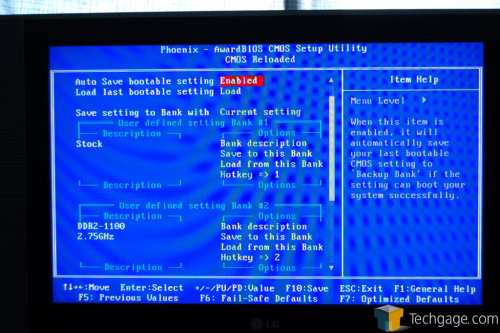 I have to say though, after using the BIOS included with the M2N32-SLI, I am not as impressed with CMOS Reloaded. The ASUS board actually allows you to save settings to a thumb drive, and restore them from the same drive or even a CD-Rom. I would love to see something like that incorporated into LanParty boards in the future.

I am impressed with what the BIOS does offer overall though, because it caters directly to overclockers. Because of that, it lacks some various features found in other boards, but those are most likely not desired by people who want this board anyway.

As enjoyable as the BIOS is though, the version included with the board is far from perfect. I had quite a few problems within the first week of using it, which got quite aggravating quickly. The problem I was suffering was a random lockup after surfing through the first menu, regarding the time and hard drives and such. This is a known “IDE bug” and has been fixed in this beta BIOS.

Since switching over to this new BIOS, I have not had a single problem. However, this was quite a huge bug to be included with a board that currently ships. After looking around some forums, it seems I am not the only one who had the problem. I would have expected better QA prior to a board being released, but I am pleased that the beta BIOS has fixed the problem perfectly. So… if you plan to pick up this board, you will want to upgrade to this BIOS as soon as you can unless you want to risk running into the similar problems.