Ever since I found out about Sciencemark, it has become one of my favorite benchmarks. It’s in-depth, in that it’s results are far more info packed than whatever other tools spit out. The tests are also quite interesting… one is a Molecular Dynamics algorithm and also a cipher break.

All times are in seconds, so the lower the better. Again the boards swapped top places throughout the different runs, so it’s hard to declare a winner here. All of the results are far too close to one another, really. 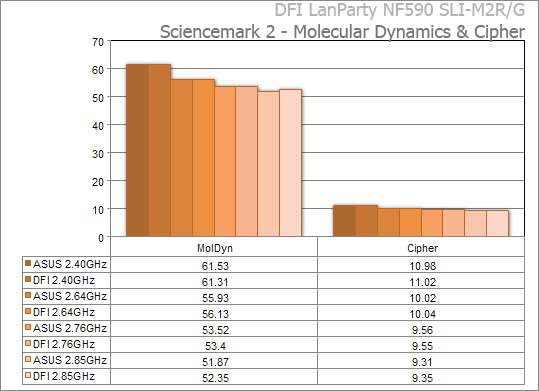 Cinebench is a tool to measure your multi-media rendering… in this case a high-resolution image. It has two small separate tests, one single threaded and the other multi-threaded. As you can see by the results, one board didn’t have an advantage over another. Where one was higher than another, it’s incredibly minimal. That’s a good thing. 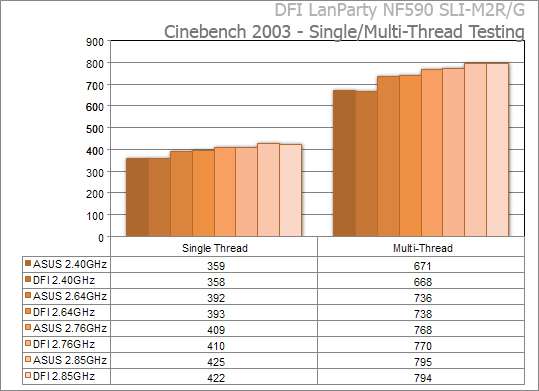 All results here are in seconds and obviously lower is better. We can see similar results that SANDRA showed… the first and last tests is where the DFI fell short, but the two middle settings they proved higher. Again, not a large difference, the biggest being 2s slower in the 8M run. 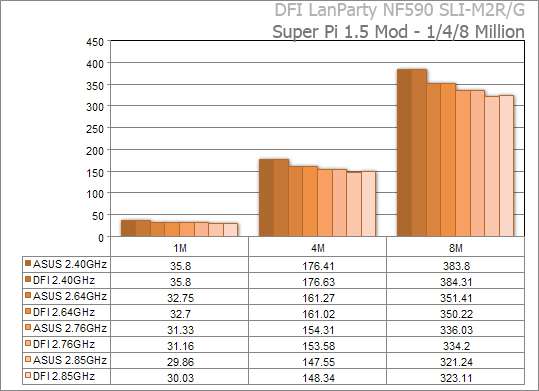 I used two scenarios when dealing with real-world multi-media tests. First, I had ripped a copy of the first CD from DJ Tiestos “In Search Of Sunrise 5” album to a solid *.wav, which weighed in at close to 800MB. I then used the standard version of the LAME encoder, and also the Multi-Threaded version. I chose to use the popular 3.97b2 for these tests.

For the DVD re-encoding, I first ripped Bad Religions music DVD, “Live at the Palladium”, and then re-encoded it using Nero Recode. Default settings were used, but it essentially compresses the full DVD into one that would fit on a normal 4.5GB disc. The time shown is the result of compressing the DVD, not the ripping process.

This graph shows some interesting results. Whereas the ASUS board beat the DFI in the standard LAME tests, it lost in the LAME MT and DVD Recode ones. In fact, the DFIs LAME MT results proved 10 seconds faster on average on each setting. The differences were not as high with the DVD recode, but is still a gain nonetheless. 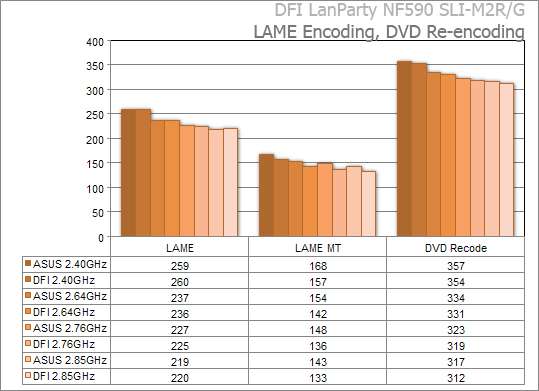 The only gaming test I usually run is Half-Life 2… a true classic. I use the d1_canals_07 level, and use default graphics settings (0x AA. 0x AF, 1024*768). I use FRAPS to record the Min/Avg frame rate, which is calculated over a 5 minutes run. Each run is different due to manual play, so these scores can’t be scaled to one another… but rather reflect real world gameplay.

No board had a huge advantage, but the DFI just inched over the ASUS in the majority of the tests. 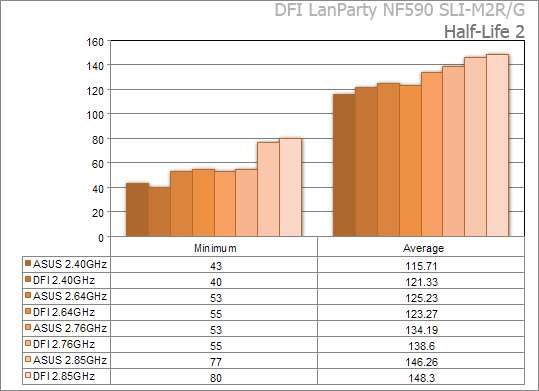 Time to test the on-board sound and also see how compatible the board is with Linux!