Diamond’s UE3000 is one of the simplest products we’ve ever taken a look at, but it’s also one that could prove to be a life-saver if the network card in your desktop or notebook decides to die without notice. It also happens to be extremely reliable, causing us to forget we’re even running a USB adapter, versus onboard or add-in.

A product like Diamond’s UE3000 USB network card might not seem too interesting at first glance, but believe me – once you wind up in a situation where you need such a thing, you’ll be willing to throw every bit of praise at it until it’s in your hands.

Take me, for example. Because we’re in the middle of building a brand-new GPU test rig, I decided to adopt the motherboard + processor combo from the old rig for my personal one. A hardware move like this should be simple, but in this case, it wasn’t, and it had nothing other than the onboard NIC to blame.

For its G1. Assassin 2, GIGABYTE chose to implement just a single NIC solution, driven by Killer Ethernet. To me, this isn’t much of a solution at all, as on one hand, I’ve had horrible luck with Killer, and on the other, the company doesn’t support Linux. So here I was, about to adopt a motherboard with a NIC that didn’t support my operating system of choice. But wait – there’s always the add-in solution, right?

This is where a sad situation became even sadder. As a backup, I have a PCIe-based Intel server NIC… which at some point over the past couple of months decided to give up the ghost. So, let’s look at this checklist: A) Onboard NIC useless? Check. B) Add-in NIC useless? Check!

Granted, a situation like this is special, and rare. But there are other much more common scenarios out there. Take a notebook or desktop, for example, which has a dead (or otherwise problematic) NIC, and is out of warranty. Replacing a notebook NIC can’t be easy, and on the desktop side, you might not actually have any PCI/PCIe slots left (or, maybe you don’t want to go into your PC to install something). There could also be those  folks who might just want a roaming solution, one that can be used on one PC when it’s needed, and then another later on. I doubt many would argue that a USB solution is a lot more convenient than a PCI/PCIe one. 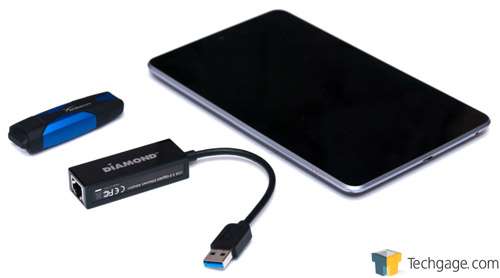 Diamond’s goal with its UE3000 is simple: to give those who need to add a Gigabit solution to their PC a simple option. And a simple option it is. At worst, you’ll have to install a driver after plugging the UE3000 into an available USB port; at best, Windows might detect and configure it itself (my case with Windows 8).

On its site and the UE3000’s packaging, Diamond notes support for both Windows and Mac OS X. However, the maker of the UE3000’s chipset, ASIX, offers a Linux driver on its website. Fortunately, it’s rather easy to install, as the following screenshot can attest: 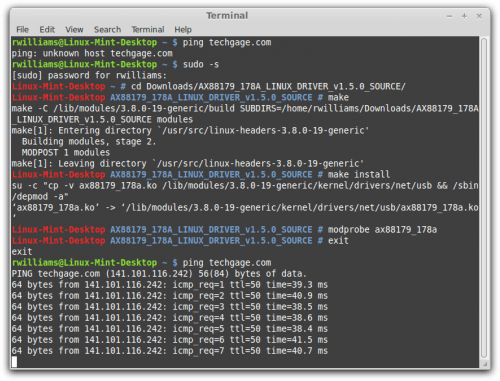 Installing the driver is a matter of extracting the archive, entering sudo -s, running ‘make’ and ‘make install’, and then loading the driver with ‘modprobe’. Afterwards, your distro should detect the NIC and configure it automatically. If not, you’re likely running a distro for more experienced users, meaning you probably know what to do next. Whatever your skill level, you’ll want to make sure that this driver you just installed will load at each boot, and if you don’t know how to do that, Google is sure to help.

Soon, going this manual route is likely to be unnecessary, as recent Linux kernels have added support for ASIX’s chipset, as seen in in this shot. I am not sure when this was added, but it was before current versions of some popular distros launched, such as Ubuntu and Linux Mint.

As I mentioned at the outset, I was forced into this USB solution because my onboard NIC is garbage, and my add-in NIC killed itself. As of the time of writing, I’ve been using Diamond’s UE3000 for a week, and as a rather heavy Ethernet user, I consider that to be a great test.

To date, I’ve had no Ethernet issue to speak of that could be blamed on the UE3000. In fact, there were times when I thought the UE3000 had crapped-out, but then realized it was some other factor at play (a brief Internet cut-out, for one).

I negotiate file transfers with my NAS on a regular basis, so I knew that with as much data I’d be moving around, I’d be able to see if the UE3000 could keep up. I’m happy to report that it did, in every single case. While I’m usually a little skeptical of USB solutions in general (versus internal cards), the UE3000 has proven to be extremely reliable.

For a real-world test, I transferred a 70GB solid file from a test PC to this one with the UE3000; the result can be seen below: 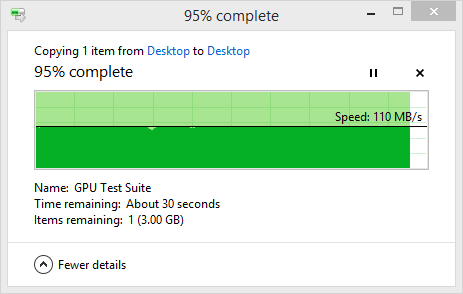 The UE3000 held up extremely well, averaging out to 110MB/s across the entire transfer. At times, Windows reported the peak throughput as 975Mbit/s: 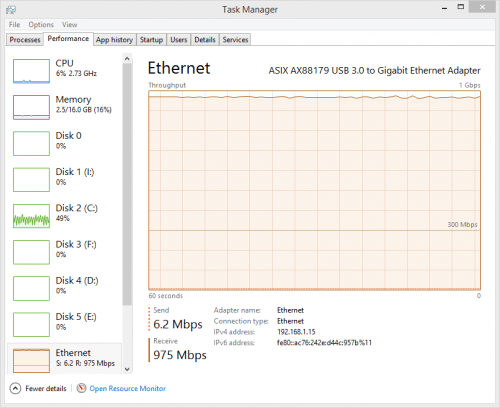 Overall, I’m very impressed with Diamond’s UE3000, and highly recommend it to anyone who needs to add a NIC to their PC via USB for whatever reason. Even if you don’t need it now, this kind of solution is great to have on-hand for when disaster strikes.

Last week, I began using the UE3000 as an interim NIC. I had figured that I’d use it for a time and then go the add-in route later. Well, it has proven to be so reliable, that I no longer consider it to be an interim… an add-in card would be just as reliable and just as fast, leaving me no reason whatsoever to go with another solution. A potential hiccup for me would have been gaming, but across Borderlands 2, PAYDAY 2, and Saints Row IV, the result has remained excellent.

Currently, Diamond’s UE3000 can be had for $28~30 at multiple etailers, which happens to be a bit more expensive than some competing solutions I’ve found. Rosewill, for example, offers a similar product for $25 – not a huge drop, but worth mentioning nonetheless. As always, shopping around could pay off, but Diamond’s UE3000 is the only such product that I can put my weight behind.

This is one of the easiest Editor’s Choice awards I’ve ever given out: