Ten years ago, Apple Computer released the iMac. What a day that was! I clearly remember being excited and disappointed all at the same time. I mean, it was a NEW Mac! But on the other hand, it was the ugliest Mac ever! But despite my disgust, one thing caught my attention fast – the introduction of the Universal Serial Bus. No more Serial and Parallel!

In those ten short years, USB has become the most popular connection-type for most users. Everything from our keyboards, mice, web cams, printers and even audio use the connection, in addition to thousands of various gadgets – including feet warmers and beverage coolers.

Thanks to the fact that USB offers great speed and is even able to power up our gadgets, the possibilities are pretty-much endless, and things should only get better once USB 3.0 hits next year. When USB 1.0 first launched, who imagined what it would become today? Who especially would have thought transmitting video would have been possible? Not many, I’m sure, but coincidentally, that’s the topic of todays article.

Video via USB – What’s the point?

Last summer, our friends at X-bit labs published a review of the first video-via-USB display, the Samsung 940UX. At the time, even I was skeptical… pointed fingers, and laughed. Having reviewed so many USB-base products in the past, I thought I had known the limitations of what could be accomplished, but I was wrong. As it turns out, the Samsung 940UX was only the first product of many to be released with such technology.

To understand why USB video is relevant, you first have to understand that this is not a technology set out to replace VGA or DVI if you have a system with a single monitor. If that’s the case, then it makes no sense to rely on USB, as VGA and DVI are faster and will allow full capabilities. USB on the other hand, is there for those people who either a) don’t have a spare video port on their computer, b) don’t want to install (or pay for) a second GPU and/or c) require two or more monitors. 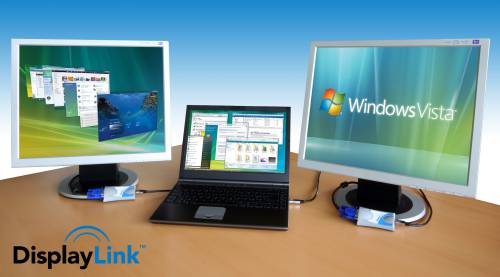 With the help of DisplayLink-based products, up to six monitors can be hooked up to a system at any given time. Obviously, many people are not going to hook up six monitors, as that’s really hitting a specific crowd. However, as monitors become ever-more affordable, consumers are beginning to contemplate the purchase of a second monitor to aide with multi-tasking. Some people may also have old monitors in their closets that could be put to good use.

It’s a fact. If you have more than one monitor hooked up, multi-tasking is made far easier. Personally, I prefer to have a single large monitor (such as a 24″) than smaller identical monitors, but many will disagree. Our own Greg King for example, absolutely loves a three-display setup. He has gone as far as to admit he prefers a 3x 19″ setup more so than his Dell 24″. Though multiple displays could prove less ideal for gaming, the multitasking ability sky-rockets.

Finances on center screen, web browser on left screen, IM conversations on right screen… these types of scenarios are where multi-display setups excel. But once again, for a three display setup, at least two video cards need to be installed. Unless DisplayLink is brought into the picture.

Multi-tasking aside, notebook users are another crowd that could feel the benefit, especially those with older models. Most notebooks today will include a DVI or VGA port, but not usually both. Recent notebooks I’ve had, have actually included HDMI and VGA, excluding the very-popular DVI altogether. That’s no good when you have a monitor that’s DVI-only. Using DisplayLink, however, a notebook could use the monitor fine, completely ignoring the fact that the notebook doesn’t include the appropriate connection.

Once setup, DisplayLink will be detected on your computer as another graphics card, or “Virtual Graphics Card” as DisplayLink likes to call it. So like most setups, DisplayLink consists of both hardware and software, with the software being absolutely required. Because of this, alternative OS’ will be unable to utilize the technology, unless DisplayLink releases fresh drivers in the future.

In order to transmit video to another display, DisplayLink’s software will convert the pixel stream into a lossless transport protocol and then send it through the USB cable and then the DisplayLink chipset, and ultimately, the display itself. This all happens in real-time. During normal use, there should be no delay on any of the displays hooked up. 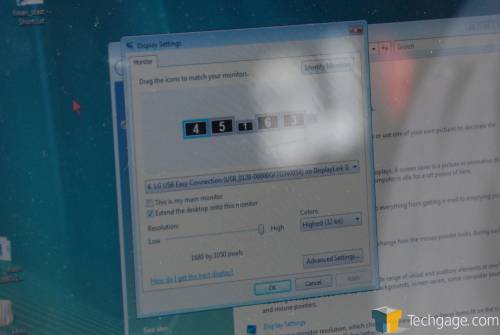 The above photo was one that I snapped while checking out LG’s booth at CES earlier this month. Their new L206WU display utilizes DisplayLink’s technology, just as the Samsung 940UX does, and they were happy to show off the capabilities during the show. The system in the middle of all this was a simple notebook computer, but with the help of their latest monitors, they had access to a total of six displays.

If you’ve hooked up more than one display before, using a video card or two, DisplayLink’s setup will not be an uncommon sight. Everything, for the most part, will work just as you’d imagine a multi-display setup to. You can move monitors around if you please and also mirror and rotate, the latter of which would be useful if you decided to use a wide-screen vertically.

Who else is using DisplayLink in their products? We will discuss that, along with installation, next.