To capture power consumption, we use a Kill-A-Watt, a cool gadget that plugs into your socket and reports the current wattage reading. We plug our testing machine directly into this, with our Gateway XHD3000 monitor plugged into the other available socket. Our results here show the power draw from the computer itself (including all internal components) and nothing else.

Please note that these figures also include the power draw from our Corsair Nautilus 500 water-cooling system, which gets its power from our PSU. Also, only one hard drive is connected to the motherboard and power supply, and the only ‘extra’ accessory used is the RAM fan. Before testing, network adapters are enabled, but no LAN cable is connected.

To record our results, we grab figures while the machine is completely idle, and then also while half of the processor (Core 2 Extreme QX9650 Quad-Core) is being utilized. The third and final set of results are grabbed while half of the CPU is being used in addition to the GPU (NVIDIA 9800 GTX), which represents a realistic result from normal gameplay. 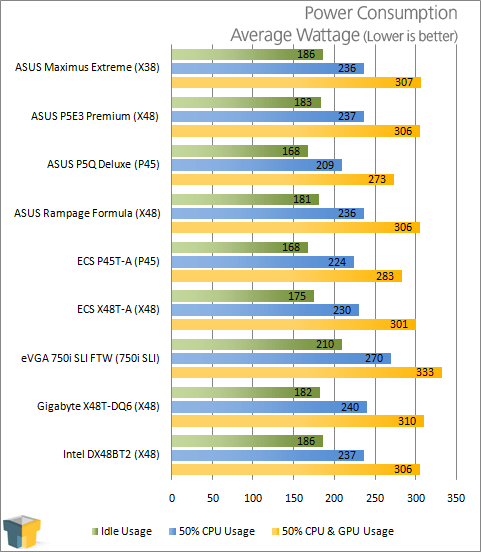 It’s a budget motherboard, so it’s no surprise that the power consumption isn’t over-the-top. Interestingly though, even though the idle power usage is on par with the ASUS P5Q, which is a much more robust board, it proves 10W more of a drain when being stressed.

This ECS board isn’t going to blow anyone’s socks off, that’s for certain. But with it’s $110 price tag and ample performance, it actually could be considered if you are looking to build a new rig on the cheap.

Throughout our performance results, we’ve seen it’s obvious the board won’t deliver the same speed as some of the higher-end models, but it still offers solid performance that should prove enough for most anyone who’s not that fussy about a process taking a few extra seconds to complete. For the price, it’s hard to go wrong. 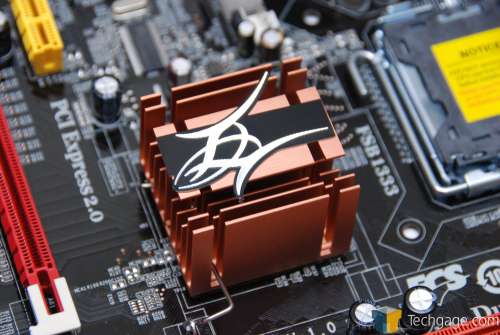 The overclocking ability on the board is nil, unless you consider 10 – 20MHz on the FSB to be an impressive feat, which it isn’t… not when 400MHz FSB isn’t even considered an overclock anymore. It’s a budget board, and it’s not designed to allow your parts you run out of spec. For that, you’ll need a higher-end model, and considering ECS’ own X48T-A doesn’t improve on the overclocking here, you’d best go with someone else.

But overclocking is not what this board is about. It offers a good set of features, including 6 USB ports on the back, a semi-decent board design, great color scheme, good performance, and of course, the good price of ~$110.